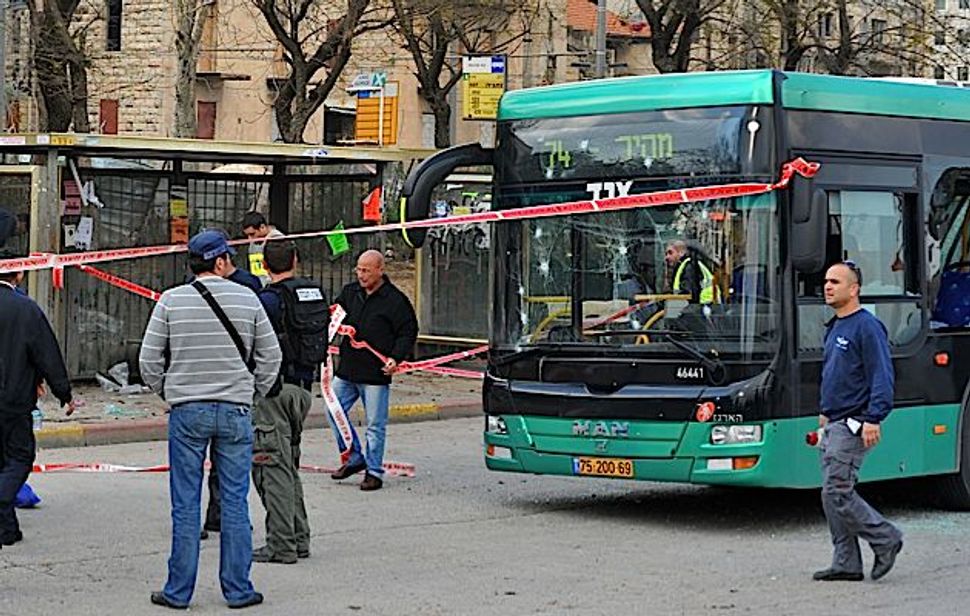 Deadly Attack: One person was killed and more than 30 were injured in a March 23 terror attack at a busy bus station in Jerusalem. Image by Getty Images

I saved the visit to my father’s grave for the last day of my trip to Israel. It’s not that I don’t like going, it’s just that there are already so many reminders of death in Jerusalem.

Both Arabs and Israelis point to bullet holes in Old City walls, each one a testament to a war, a skirmish, a killing. These holes are never filled; they are preserved as monuments to deaths gone by.

Everywhere, it seems, there are streets named for fallen heroes and soldiers. And on many of those streets are small granite markers attesting to those killed in a bus bombing, the terror weapon of choice for Palestinian militants until a few years ago. There is a sameness to these markers: a list of names, a date and a bus line number — the 18, the 14, the 2.

It was raining on the last day of my trip so I took a taxi to Har Hamenuchot, a sprawling cemetery where my father is buried at the Western entrance to the city. As I entered I thought of seeking out the fresh graves of the five members of the Fogel family, killed in a particularly horrific act of terror in the settlement of Itamar just two weeks earlier. I thought of stopping by the shrine for Rabbi Shlomo Carlebach, whose music has been so important in my life.

But I was a man with a purpose. I made my way straight to my father’s grave. In my pocket was a slim paperback edition of the Psalms with the inscription “M. Goldman” on it. (My father had a habit of putting his name in all his books, even pamphlets.) It was the same booklet that my father used to pray at the graves of his parents.

I never know what to say at a grave. Do I talk about my children? Do I tell him about my students and how I just traveled with them through Israel? Do I bring him up to date? Do I reminisce? Do I talk politics? Torah? Is anybody listening? Am I beginning to look like a crazy person, tears streaming, talking to stones?

My father’s little book helped. I prayed in the same language he prayed. He helped me find the words. After a short while, I put a stone on his stone and left the cemetery.

The rain had stopped and I was in the mood to walk. I walked up the winding hill to an ultra-Orthodox neighborhood called Givat Shaul. I got a little bit lost wandering the streets and alleys and watching the people. There wasn’t a taxi in sight, but I did see a bus coming up the street. The computerized sign announced “Sha’ar Yaffo,” Jaffa Gate, as good destination as any, I figured.

I paid my fare, found a seat near the window and put on my headphones. I guess that is why I missed the sound of the explosion. Our bus suddenly came to an abrupt halt just after passing Jerusalem’s Central Bus Station and, out the window, I could see soldiers running with their rifles at the ready and policemen emerging from everywhere. Many were in plainclothes and donning folded caps with the word “Mishtara,” or police, on it.

Our driver opened the door and some ran away from the scene and others toward it. Within seconds, the sirens of arriving ambulances and military vehicles filled the air. A helicopter circled overhead. The police were just beginning to cordon off the area and pushed back the group of onlookers that I joined. It was a cross section of western Jerusalem with haredim, tourists, secular Israelis and foreign workers all jockeying for a good vantage point. Just a block away we could see two crippled buses and medics carrying away the injured on stretchers.

Rumors swept through the crowd. People got reports from their cell phones and from web sites and from each other. A Filipino woman was shaking and crying, saying that she ran for the bus when there was an explosion. Another woman fought with an officer guarding the scene, saying she had a child on the bus and wanted to pass. Many expected to see body parts and the burned out shell of a bus, the hallmarks of a bomb detonated by a suicide bomber. But this was not as grisly a scene.

Suddenly someone shouted, “There is another bomb!” Some people peeled away but most of us did not know where to go. Is any place safe? I looked around nervously and held my ground.

Luckily, there was no second bomb. And the bomb that went off was not on the bus as in previous incidents but left at the bus stop in a suitcase and detonated as two buses pulled in to pick up passengers. The final count, we found out later, was one dead and 30 wounded. But the toll was much higher: a city traumatized, a peace process in ruins, so little reason for hope.

And I realized that soon one more granite marker of a death would be set up on a Jerusalem street. Perhaps on my next visit to my father’s grave I will stop by this street and place a stone as a symbol of memory and blessing.

Ari L. Goldman, a professor of journalism at Columbia University, is the author of “Living a Year of Kaddish.”

Ari L. Goldman is a professor at Columbia Journalism School and director of its program on covering religion.