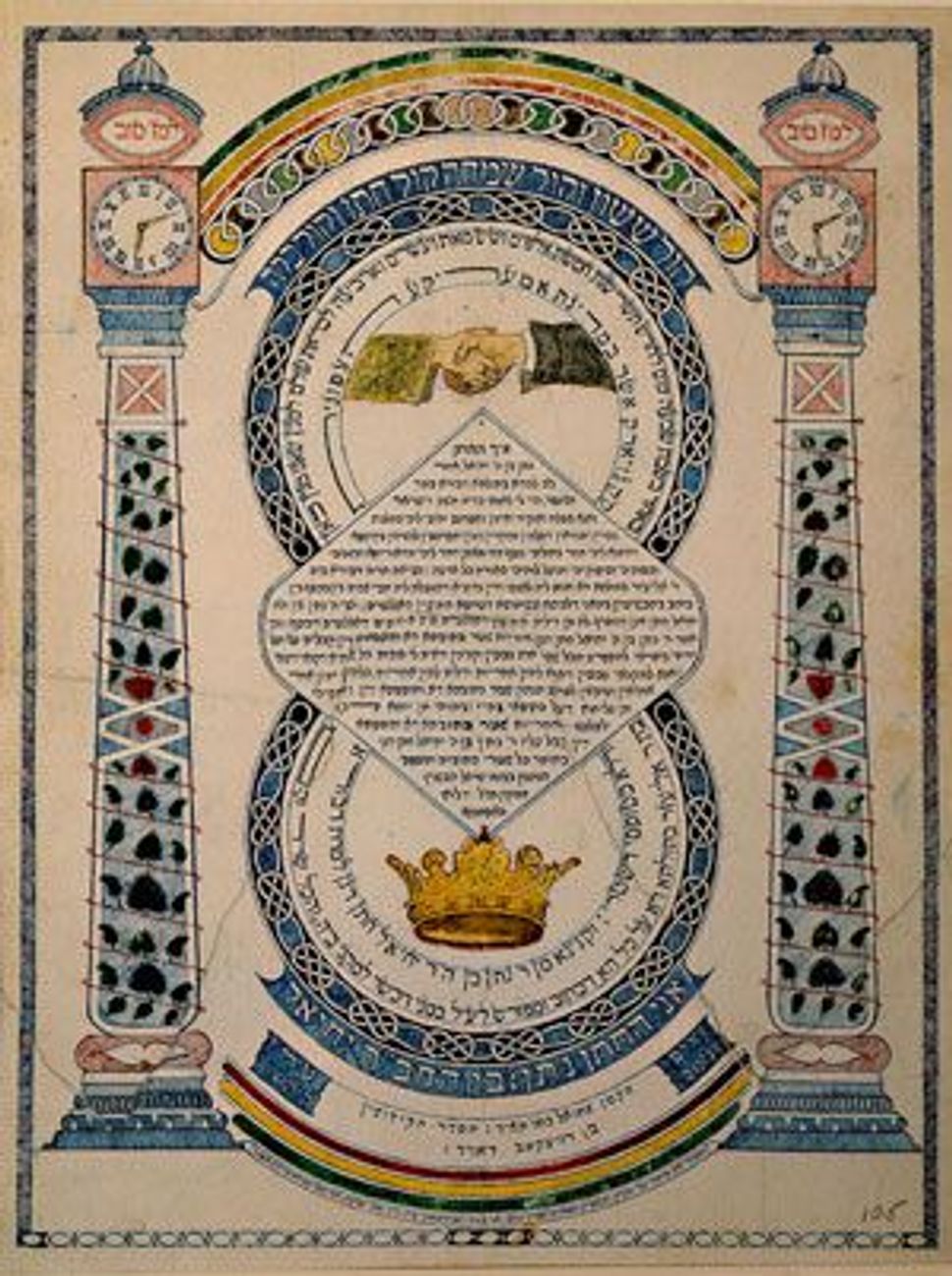 Intricate: A marriage contract created for a couple in New York in 1863 by artist and calligrapher Zemah Davidsohn uses ink and watercolor on paper. Image by courtesy of The Jewish Theological Seminary

The current exhibit at New York?s Jewish Museum, ?The Art of Matrimony: Thirty Splendid Marriage Contracts from the Jewish Theological Seminary Library,? is, essentially, a room full of contracts. True, they are beautifully decorated, restored and mounted. But their raison d?être is as legal documents ? each stipulating the conditions of a marriage.

Jewish law states that a couple may not cohabit without a ketubah, the official Jewish marriage document, whose basic Aramaic text has remained essentially unchanged for two millennia. Each document states the names of the bride and groom and their respective fathers, the date of marriage and the city in which the event took place, the bride?s dowry and other details ? providing a clear window onto the lives and circumstances of Jews from Bordeaux to Baghdad and from the 12th century to the 21st. 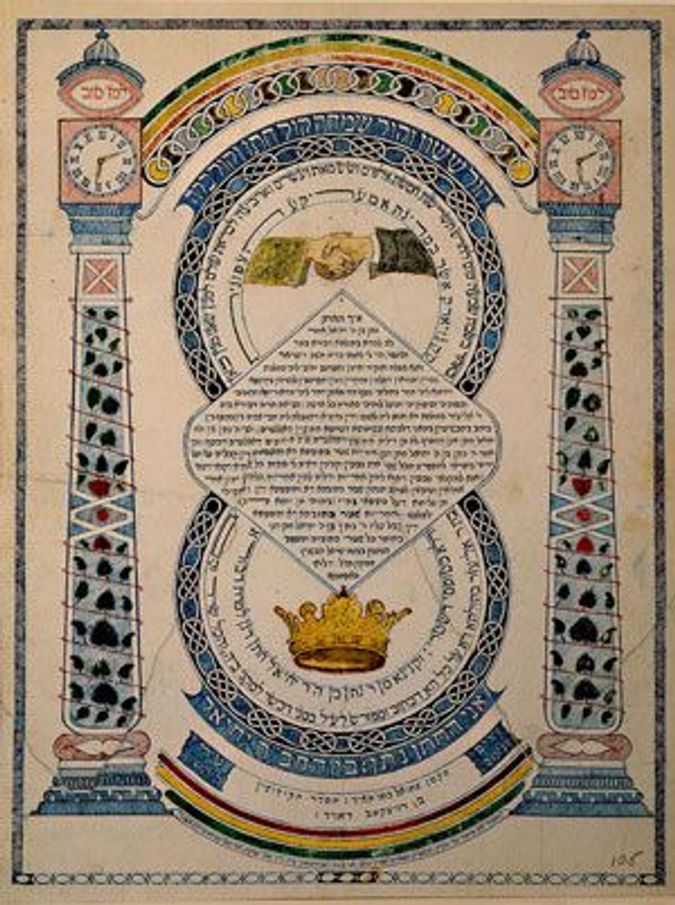 Intricate: A marriage contract created for a couple in New York in 1863 by artist and calligrapher Zemah Davidsohn uses ink and watercolor on paper. Image by courtesy of The Jewish Theological Seminary

Prior to the rabbinic formulation of the ketubah (meaning ?that which is written?), grooms were required to pay the bride?s father at the time of the wedding. This not only made it difficult for grooms to afford marriage or purchase a dwelling; the prepaid settlement also made it easier for a man to divorce his wife, since it would cost him nothing more.

Under the terms of the ketubah, the groom agrees to support his bride during the marriage and to settle payment, including the return of her entire dowry, on her in case of his death or the dissolution of the marriage. Hauptman said that, as a result, men were less likely to end the marriage ?if the wife burned the soup.? The ketubah also ensures that widows will not be left penniless or be thrown out of their homes by the heirs ? an important innovation at a time when women had few options by which to support themselves. Indeed, Hauptman said, the recommended dowry was 10% of the father?s estate for each daughter, who was otherwise not allowed to inherit.

The earliest ketubah in the exhibition is from the Cairo Genizah and dates from the 12th century. This fragment in red, black and gold ink on parchment ? discovered in the JTS archive only three years ago by exhibition curator Sharon L. Mintz ? is a preamble of celebratory verses matching those found in a ketubah from Sana?a, Yemen, 500 years later.

Other rarities include a holiday ketubah from Tetouan, Morocco, that was displayed and read aloud on Shavuot, in which the groom is the Nation of Israel and the bride is the Torah. A printed 1930 New York City ketubah from the Jewish National Fund includes Zionist imagery and a tear-off, numbered coupon so that the couple could make a wedding contribution to the fund. The exhibit also includes custom-made ketubot by artists Ben Shahn and Zemah Davidsohn, whose 1863 contract shows two hands clasped in a handshake and two clocks with the hands at 6:13. (The number of commandments is 613).

Mintz and others at JTS chose to display 30 contracts across a wide geographical swath from the library?s 600 ketubot. The restoration process was completed over a two-year period. As the practice of ketubah decoration is traditionally Sephardic, the exhibit also features exquisitely embellished ketubot from Italy, Afghanistan, Iran, Iraq, Jerusalem, Greece, France, The Netherlands, Yemen, India, Syria and Turkey, and a Karaite ketubah from Ukraine.

While a resurgence of Jewish imagery in art since the 1970s has produced an explosion of handmade and decorated ketubot that are often displayed at home, some communities, including the Chabad Hasidim, keep to the traditional Ashkenazi practice of using a plain printed ketubah. ?The Chabad tradition is to decorate the marriage rather than the ketubah,? said Rabbi Joseph Eisenbach of Litchfield, Conn.

The decorated ketubot on display show not only Jewish migratory patterns, but also local influences. A 1680 ketubah from Ragusa (now Dubrovnik, Croatia) for a Sephardic bride and groom shows a Venetian decoration style, Jews being prominent in trade with the city?s rulers, Venice and then Constantinople. In 18th-century Italy, rabbis imposed sumptuary laws on ketubah embellishment to inhibit both tax collectors? interest and public envy, Mintz said. In response to the spending limits, families would hand down marriage contracts, excising the text and reusing the border.

Couples today can order ketubot online and consult with artists to create their own imagery. Contemporary New York artist David Wander, who is not included in the exhibition, has designed ketubot incorporating a couple?s personal interests. For one couple, he translated tikkun olam, repair of the world, into Chinese.

Artist Deborah Ugoretz, also not a part of the exhibit, makes both papercut and painted ketubot. She consults with a couple to discuss their feelings about each other and the marriage they are about to begin. ?It?s not like picking a china pattern; they?re really creating an heirloom for their family,? she said.

Hauptman encourages couples to be creative with their ketubot. She also suggests that couples add the Lieberman clause, created in 1953 by Saul Lieberman, a Conservative rabbi, either in the ketubah or as a separate document. The clause, and other halachic prenuptial agreements, prevents the wife from becoming an agunah, a woman whose husband refuses to grant her a divorce.

The contemporary ketubot in the JTS collection were all donated by divorced couples. Not wanting to display these documents, Mintz commissioned artist Archie Granot to design a sumptuous ketubah for the collection. Included in the current exhibit, it is based on the Madaba Map from Jordan, with Jerusalem at its center, and has a papercut border of verses by Jerusalem poets Elsie Lasker-Schüler and Zelda Mishkovsky.

Jerusalem, though, is just one theme of the many ? including cherubim, lions, astrological symbols and heraldic family crests ? used to decorate the documents on display. Just as we divine from these ketubot clues about once-flourishing Jewish communities, so future generations may peruse ours.

?The Art of Matrimony? will run through June 26.

Malka Percal writes about the arts and Jewish culture.