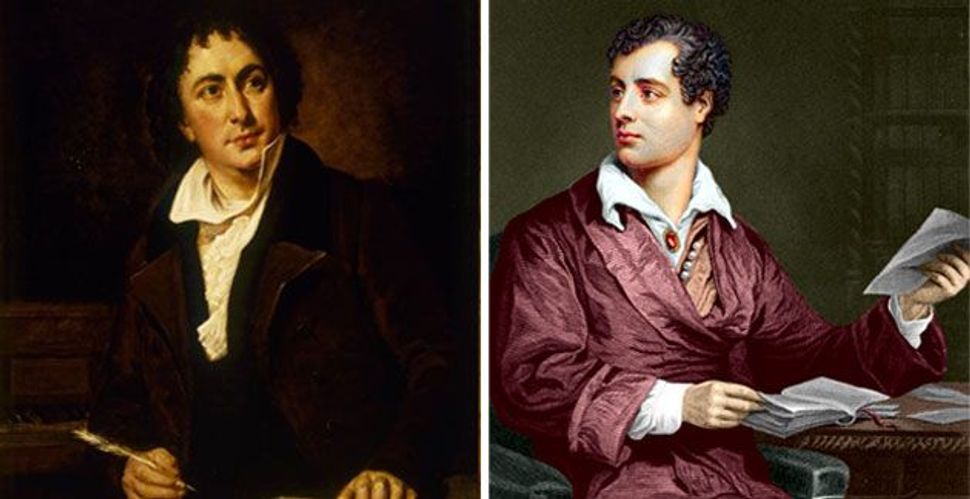 Words and Music by ?: Isaac Nathan writes on the left, Lord Byron (in gown) on the right. Image by wikicommons

Lord Byron was a celebrity before the word was invented. All over Europe, men saw his portrait, and wanted to look like him. Women ? also a few men ? saw him and wanted to make love to him; a surprising number succeeded. The details of his private life made good topics for public conversation. Unlike some modern celebrities, Byron was good at something: He wrote spectacular poems, still read, and loved, today.

Among the best loved of his poems appeared in a wildly successful collection called ?Original Hebrew Melodies? (1815). Byron wrote ?She walks in beauty, like the night,? and ?The Destruction of Sennacherib,? as lyrics to go with music composed by his friend, Isaac Nathan. The collection sold out immediately. Pirated editions, cashing in on the collection?s popularity, also sold out. And Byron and Nathan collaborated on an expanded version, published the following year.

As the title of the collection suggests, the collaborators made a big deal of Nathan?s Jewishness. Nathan adapted some of the melodies straight from those used in the Sephardic synagogues of London. How many Jews have read ?She walks in beauty,? without suspecting that it was written to be sung to a Sephardic tune for ?Lekha Dodi??

It took a certain amount of daring to collaborate with a Jew, an unconverted Jew, in England in the early 19th century, but Byron had compelling reasons to collaborate with Nathan. Lady Caroline Lamb, one of Byron?s lovers, suggested the idea; Byron?s banker, Douglas Kinnaird, agreed and, despite the provenance of the idea, Byron would expect his own fiancée, Annabella Milbanke, a respectable, religious and proper young lady, to appreciate his respectful treatment of biblical themes. Byron himself loved to read the Bible, and incorporated biblical verses in much of his other work. He boasted to his friend John Murray that he had read the Bible ?through and through before I was eight years old ? that is to say, the Old Testament, for the New struck me as a task, but the other as a pleasure.? There was also the side-benefit that collaborating with a Jew might scandalize some people Byron did not at all mind scandalizing.

Since the initial success of ?Hebrew Melodies,? the music and the lyrics have had divergent histories. Byron?s poems stayed famous; Nathan?s music disappeared. Since the middle 1800s, the music has gone completely out of print. Fred Burwick, professor emeritus of English at UCLA, decided to change that. Together with his student, Paul Douglass, a professor of English and American Literature at San Jose State University (who had already written a biography of Lady Caroline Lamb), they published a new edition of the original poems and music in 1988. Then they cajoled professional musicians into recording performances of 13 of the original 29 poems. You can hear the lyrics and music together, probably for the first time in more than a century, by visiting Hebrew Melodies at their website, Romantic Era Songs.

The music does, indeed, give additional power to the poems. Byron wrote ?She walks in beauty,? on seeing his cousin?s new wife at an evening event, wearing the black of mourning, looking beautiful and virtuous; Nathan matched that with a melody for ?Lekha Dodi,? which envisions the Sabbath, arriving at evening, as a virtuous bride. Byron wrote ?Oh Snatch?d Away in Beauty?s Bloom,? a mournful poem about the futility of mourning, which Nathan set to a meditative melody. ?The Destruction of Sennacherib,? Byron?s dramatic retelling of 2 Kings 32-37, the miraculous plague that foils an invasion of Judah, pairs with Nathan?s dramatic music, reminiscent of Schubert?s uncanny ?Erlking,? also written in 1815.

If it sounds so good, why did Nathan?s music disappear so completely? A talented composer, Nathan certainly did not have the impact on music that Byron had on poetry. Styles in music change. Nonetheless, Douglass says: ?It is hard not to attribute the lack of attention paid to the ?Original Hebrew Melodies? to lingering anti-Semitism.?