The Rich and the Bloody 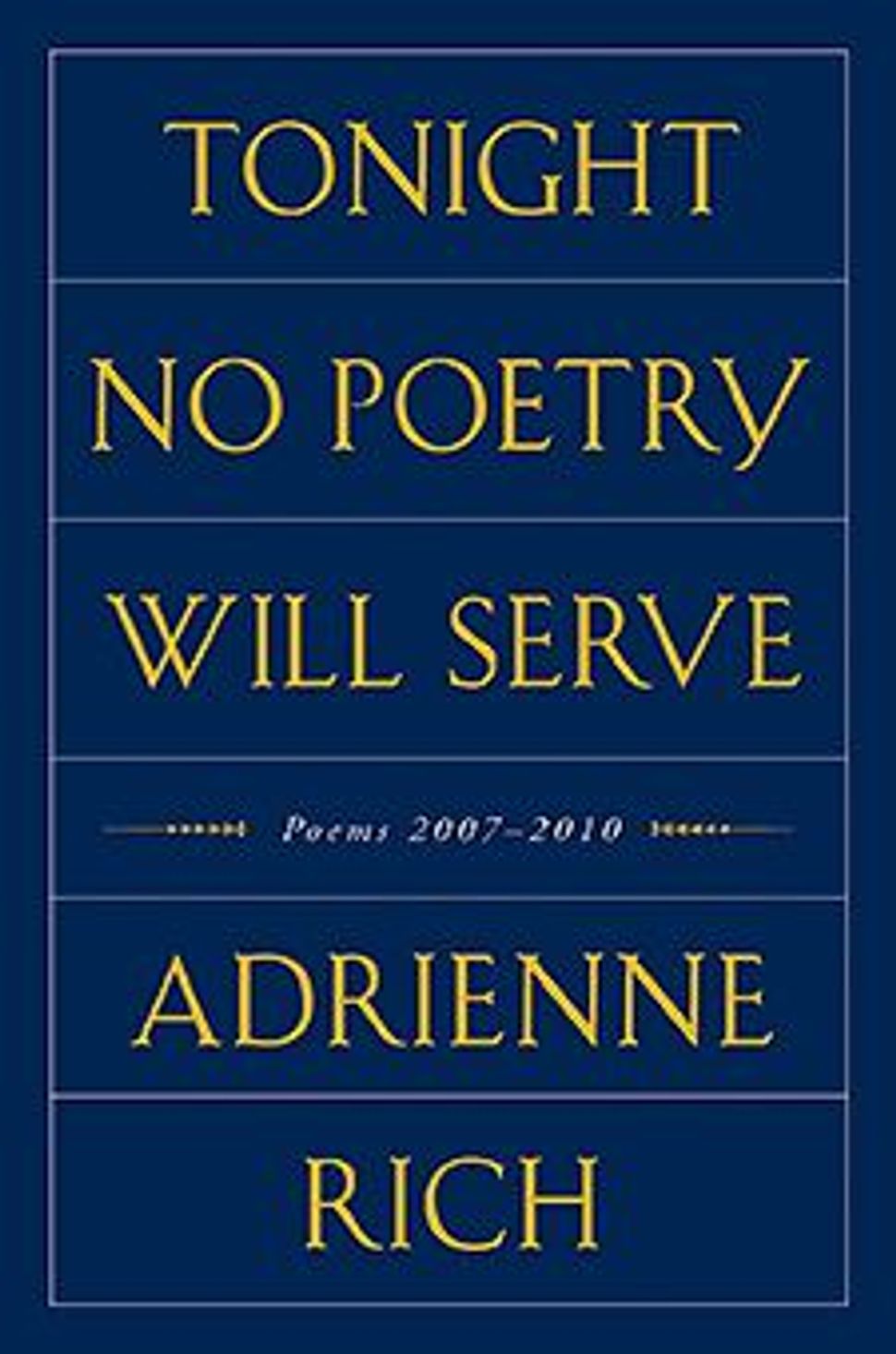 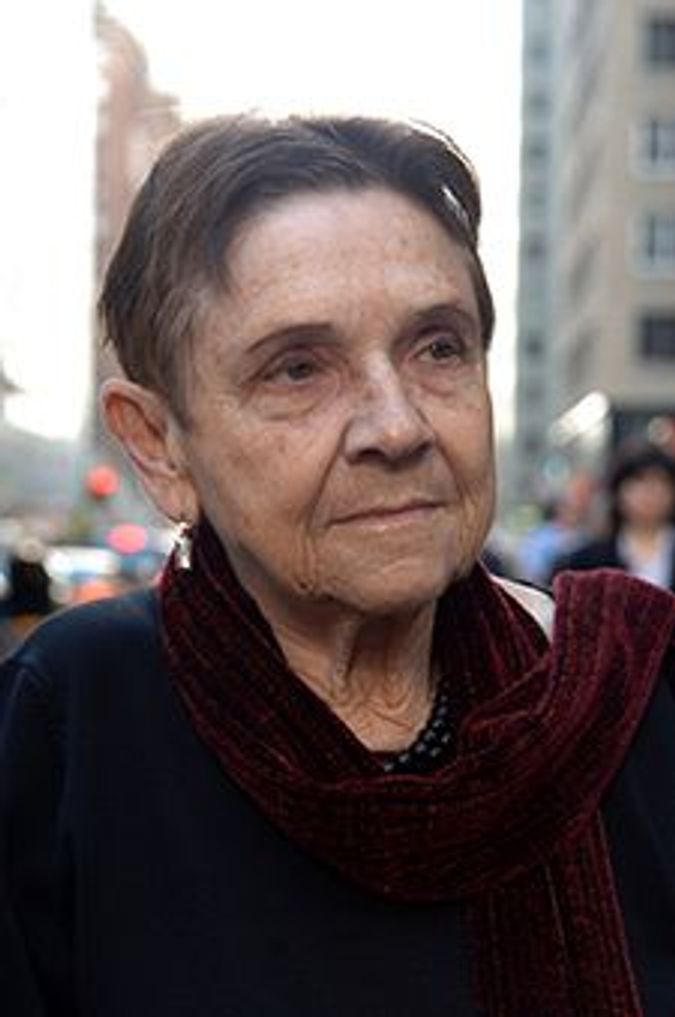 Serving Language: Adrienne Rich is a tireless champion of words and, beyond words, truth. Image by Getty Images

How does poetry serve, since, as W.H. Auden told us long ago, it ?makes nothing happen?? That is the question behind Adrienne Rich?s most recent book, which comes as a summary of all she has learned in the course of giving us 30 books of poetry full of commitment to the art and its relevance. I find in her work always great strength, of mind and of ear. She does not seek to be obscure or to write for trivial reasons; her poems emerge from personal need and urgency. So the opening poem, ?Waiting for Rain, for Music,? begins with an invocation:

Burn me some music Send my roots rain I?m swept
dry from inside Hard winds rack my core
A struggle at the roots of the mind

Rich evokes no imagined muse out there, but an internal conflictual process, the alchemy of her own need to write ? which begins in dryness but begs for rain. The urge, the urgency to make poems, has not left her entering her seventh decade of writing, as these poems written over the past four years testify. What makes her voice stand out are both the range of her concern and her refusal to distinguish the ?merely? personal from the political. There?s no ?merely? in her voice, which Robert Hass has described correctly as a mixture of darkness and salt. But she?s not without humor, either, as she caricatures herself still writing in her eighth decade.

The last line break illustrates the tension between a poetry against war ? that is, death ? and a poetry about poetry, about the intricate movements of feeling in life. Poetry then, is language at war with itself, struggling with itself and with the rhetoric that pollutes its environment, the rhetoric of cable television, politics, 24-hour news cycles and endless chatter that would subvert the power of language to make us feel with more imagination. In the face of this onslaught of rhetoric, Rich?s strategy emerges in the very beautiful title poem, ?Tonight No Poetry Will Serve,? which begins with a view of a sleepless lover returned to slumber,

only to invoke by this restlessness a reflection on her own dissatisfaction with the limits of the intimate lyric: ?Tonight I think / no poetry / will serve?

For how can poetry, with its intimate voice, ?serve? in a time when language itself is constantly raped and mutilated or, as Rich suggests evocatively, tortured?

When this poem first appeared in The Nation, politicians in the run-up to the 2008 election were blithely outdoing themselves, spinning rhetoric to defend water-boarding. When our public language is tortured in the name of torture, Rich feels the damage at the core of poetry, for how can the same language embrace the dearest intimacies and apologies for cruelty?

One response is to turn back the rhetorical fire on the aggressors. ?Ballade of the Poverties? is a simple litany addressing and raging against the ?princes of war? and the ?princes of finance? who ?travel by private jet like a housefly / Buzzing with the other flies of plundered poverties.? As the poet says here, ?there are poverties and there are poverties? and one of them may be the poverty of mere rhetoric, even if I personally enjoyed the whipping her ferocity gives to those who well deserve it.

But generally, Rich is far from simplistic, for she knows and reminds us of how poetry itself is born of war, that her poetry and ours has roots in the blood and gore of Homer?s ?Iliad,? with its ?ugly glory? where ?open-eyed wounds / feed enormous flies / Hoofs slicken on bloodglaze.? In ?Reading the ?Iliad? (as if) for the First Time,? she recognizes that even Keats?s ?Grecian Urn,? with its beauty as truth, has as its background a sea ?stricken? with ominous ?black long-oared ships? of war, and a shore of ?chariots shields greaved muscled legs / horses rearing Beauty! flesh before gangrene.? Here, Rich deftly evokes the confusion of battle by piling her words into a collision of broken syntax. 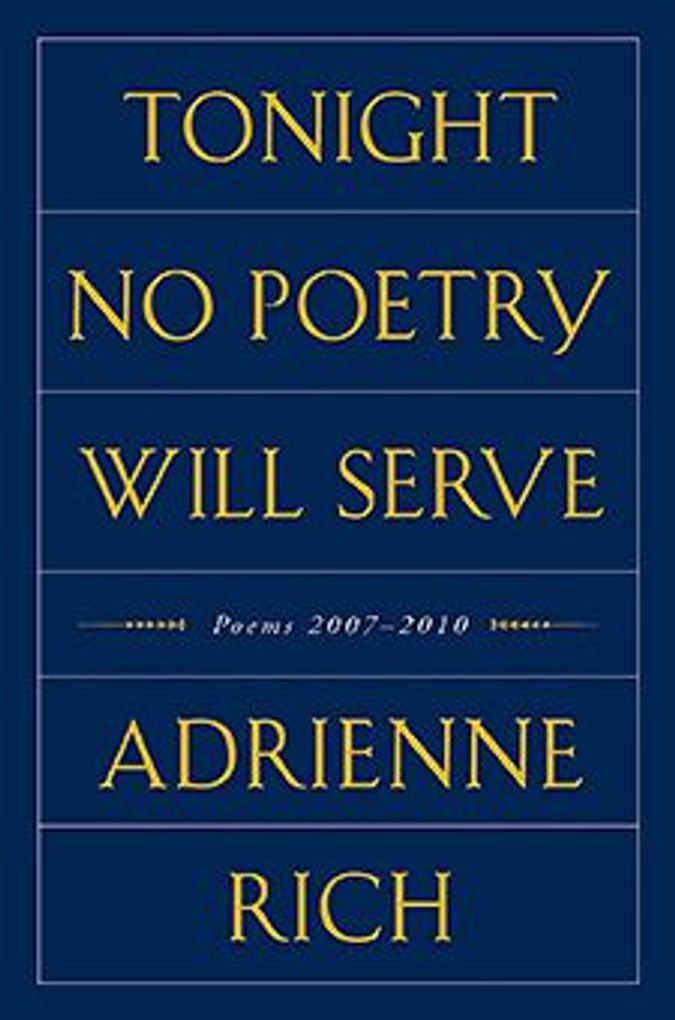 The consolation of poetry, then, is not to turn away from painful scenes, but to offer ?[n]ames of the fallen from both sides? in ?passionate objectivity.?

Thus in ?Emergency Clinic,? she sees the poem itself as ?caustic? and ?implacable.? Instead of a ?simplehearted love? that would cover the wounds of the world with bandages, she offers something much more difficult: an eye for ?skin too quickly scabbed? that ?mutters for my debriding.?

Rich is asking us to accept that poetry can best serve us by evoking our pain and by scraping off the scabs of convenient language that cover our wounds and our torture of ourselves and others. For Rich, poetry is in a war against itself, a war against what is merely pretty, a war against the scab that would cover the wound.

At her best, the words in her poems have no dead skin. They still bleed fresh.

Rodger Kamenetz is the author, most recently, of ?Burnt Books: Rabbi Nachman of Bratslav and Franz Kafka? (Schocken/Nextbook, 2010)

The Rich and the Bloody