Washington Turns Toward Iran as Revolutions Spread in the Middle East 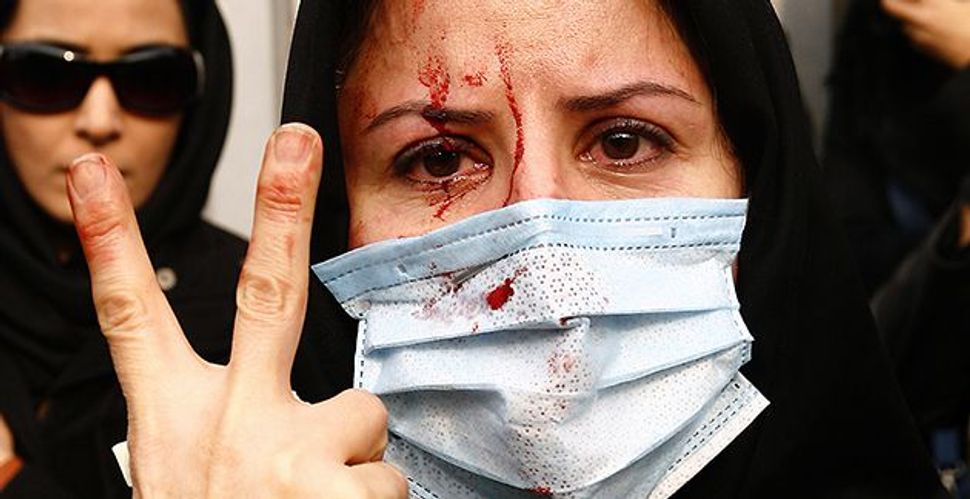 Revolution in Tehran?: An injured Iranian opposition activist during anti-government protests in December of 2009. Image by Getty Images

Amid the revolutionary turmoil sweeping the Arab world, there is renewed interest in Washington in supporting the movement for human rights and democracy in Iran.

The new atmosphere reflects a noticeable shift in the policy discussion in Washington. The Obama administration has, at times, been hesitant to embrace Iran’s opposition movement, wary of being seen as meddling in the country’s domestic politics and of undermining diplomatic efforts to engage the Iranian regime. Meanwhile, Israel and some of its supporters have worried that focusing on the Iranian opposition could distract the international community from efforts to counter Iran’s nuclear program.

One sign that these approaches are evolving was a March 20 video address for the Iranian New Year of Nowruz by President Obama in which he pointedly highlighted the plight of Iranian dissidents.

Another indication of change was the formation 10 days later of a nongovernmental policy task force focused on developing and building backing for policies that would encourage democracy and respond to human rights abuses in Iran. The task force’s members include one current staffer and another former official with the American Israel Public Affairs Committee, Washington’s leading pro-Israel lobbying group.

“While the nuclear issue is a top concern, there are other issues worth focusing on,” said the task force’s co-director, Josh Block, who until last year had been AIPAC’s spokesman.

The new task force, which was launched March 30, is a joint project of the human rights advocacy group Freedom House and the centrist, Democratic-allied Progressive Policy Institute. Other task force members include Steve Beckerman, assistant director for policy and government affairs at AIPAC; Kenneth Pollack, director of the Saban Center for Middle East Policy at the Brookings Institution; and Ray Takeyh, an Iran expert at the Council on Foreign Relations.

Block, a senior fellow at the Progressive Policy Institute, stressed that while the democracy issue is not directly related to the nuclear problem, it could help bring about broader change. “Highlighting the attention we are giving these issues will increase the pressure on Iran and will empower those who want change,” he said in a conference call with reporters announcing the task force’s formation.

The task force’s other co-director, Andrew Apostolou, warned of making a trade-off between the nuclear issue and the quest for democracy in Iran. Such a trade-off was made in Libya to get it to abandon its nuclear program and resulted in the continued abuse of the Libyan people, said Apostolou, a senior program manager for Iran at Freedom House.

The task force’s focus seems to be in sync with the recent tenor of the White House on Iran. In his Nowruz video, Obama struck a new tone, departing from his emphasis — in previous years’ Nowruz addresses — on reaching out to Iran’s leaders. Instead, he blasted Tehran for human rights abuses in its efforts to quash the opposition. “Young and old, men and women, rich and poor, the Iranian people have been persecuted,” Obama said.

The president also listed names of Iranian activists who were jailed and punished by the regime. “Though times may seem dark, I want you to know that I am with you,” Obama added.

“No one has been more critical of Obama than I have, but you have to recognize good news,” said Michael Ledeen, a prominent neoconservative writer.

Israel and its supporters remain focused on increasing the pressure on Iran and ensuring that Washington maintains a credible military threat against Tehran. Speaking at a New York fundraising event for Friends of Israel Defense Forces, Israel’s defense minister, Ehud Barak, said that “it is essential to shift towards crippling and paralyzing sanctions while all options [are] on the table.”

Israel’s main goal right now, said a former Israeli defense official who had been involved in shaping policy toward Iran, is to keep the issue on the front burner, a task that has become more difficult with the upheaval in the region. For this goal, the official said, adding democracy and human rights to the agenda could be helpful. Israel is also highlighting in its contacts with American officials Iran’s growing role in destabilizing the region, as seen in Iran’s recent attempts to smuggle arms to Gaza.

“Despite turmoil in the region it is critical not to lose focus on Iran,” said Marvin Feuer, AIPAC’s director of policy and government affairs, speaking at a seminar on Iran and Israel hosted by the Reserve Officers Association. He stressed that while with other Middle Eastern players, America might face conflicts between pushing for democracy and maintaining its own security interests, Iran is different. “The Iranian case does not pose the same problem,” he said, “In Iran, all of these concerns align.”

“Iran is a bad player in any realm we can think of,” Feuer added.

Washington Turns Toward Iran as Revolutions Spread in the Middle East