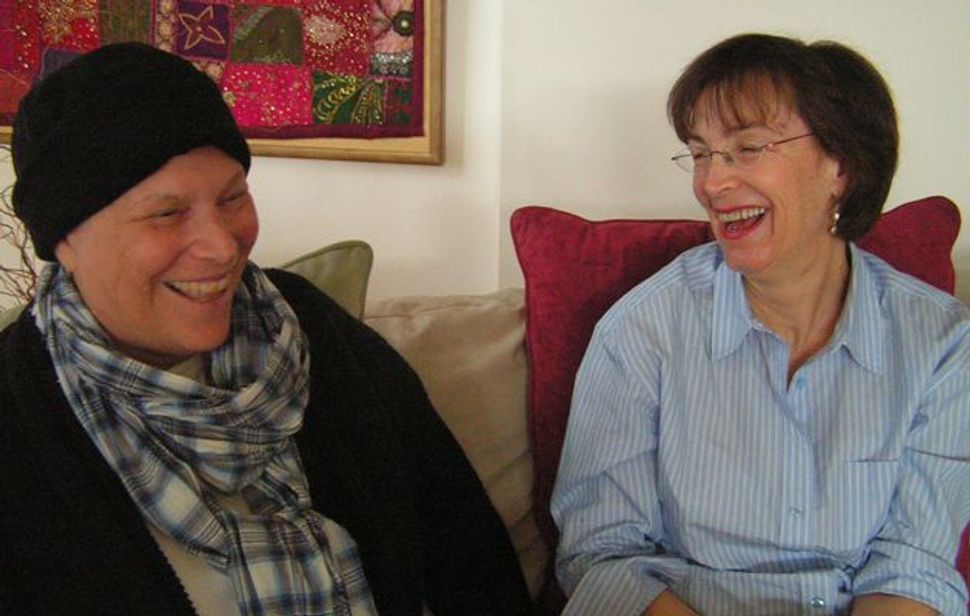 Marla Gilson is a well-known face in Jewish advocacy circles. A long time head of Hadassah’s Washington office and an alumna of the American Israel Public Affairs Committee and the federation system, Gilson was recruited last June to head the Association of Jewish Aging Services (AJAS), an umbrella organization for 110 Jewish nursing homes and facilities for the elderly.

But Gilson’s term as president and CEO of the group abruptly ended recently, when AJAS fired her after she fell ill.

In December, Gilson was diagnosed with leukemia, a life-threatening form of cancer that attacks blood cells. She began intensive treatment that included chemotherapy and is now awaiting a bone marrow transplant procedure.

The new reality into which she was thrust into taught the long-time Jewish activist just how strong a circle of friends she had built during her years of public work. Jewish organizations launched a drive to find a bone marrow match for Gilson, and dozens showed up to provide samples. Though a perfect match was not found, Gilson will be able to receive a bone marrow donation from family members.

But soon after her struggle against cancer began, AJAS’ lay leadership began showing signs of unease with her prolonged sick leave. In a February 13 letter to Barbara Gold, who at the time was chair of the board, and to the Marty Goetz, the current chair, Gilson attempted to assuage their concerns and stated she would only need a six month leave, during which time she could continue to work from home.

“Believe me, I had no idea that I would be facing this challenge when I accepted the CEO position and no one wishes more than me that I had not gotten sick,” she wrote. Gilson emphasized she believed she could perform her duties from home during the recovery period.

But AJAS was unpersuaded. In a March 21 memo to the group’s employees, Gold and Goetz announced Gilson’s dismissal due to her illness and initiated the search for a new director.

In response, Gilson offered to take a cut in her compensation so that AJAS could pay for a consultant who would assume some of her responsibilities until she returned. Gilson ended her letter offering this by expressing disappointment with her employers’ conduct.

Given the group’s mission of providing “compassionate health care,” Gilson wrote, “I had hoped for greater understanding from the AJAS Board for an employee. Facing the challenges of a life threatening illness would have been difficult enough without having the additional worry about the financial security of my family.”

AJAS responded with an official termination letter, effective April 26. The association’s board explained that the organization couldn’t afford to provide Gilson with a leave of absence.

“AJAS would face an undue hardship, if not irreparable harm, if the essential functions of the position were not being performed for another six months,” Gold and Goetz wrote. They added that Gilson’s personal belongings from her office would be packed and shipped to her home.

Goetz, on behalf of AJAS’ board, told the Forward that the organization would not comment on Gilson’s firing. Gilson, too, would not speak about the issue.

But Gilson’s friends in Washington’s Jewish advocacy community are speaking out.

“I’m just stunned,” said Ester Kurz, director of legislative strategy and policy at AIPAC. Kurz, who was next to Gilson when she received news of her firing, said Gilson was devastated. “It is the most cruel thing of all,” she added.

Adding to her financial challenges, the termination means Gilson will now have to pay for her own health insurance under COBRA, the federal program under which terminated employees may continue coverage from their employer out of their own pocket. Kurz and other friends contacted by the Forward argued that AJAS, as a Jewish organization, should have shown a greater measure of compassion toward an employee in need.

But the issue is not that simple, said Rabbi David Teutsch, director of the center for Jewish ethics at the Reconstructionist Rabbinical College. “An organization that is tzedaka-based has to balance using tzedaka money for the purpose for which it was given with ensuring its employees are treated ethically,” he said.

A Jewish value solution, said Teutsch, would be to find a way to accommodate Gilson’s needs while ensuring the group’s interests are maintained.

While disheartened by recent events, Gilson did have some good news this week, on the much more important front of her struggle. Her leukemia, test results confirm, is now in remission, and she is ready for a bone marrow transplant.