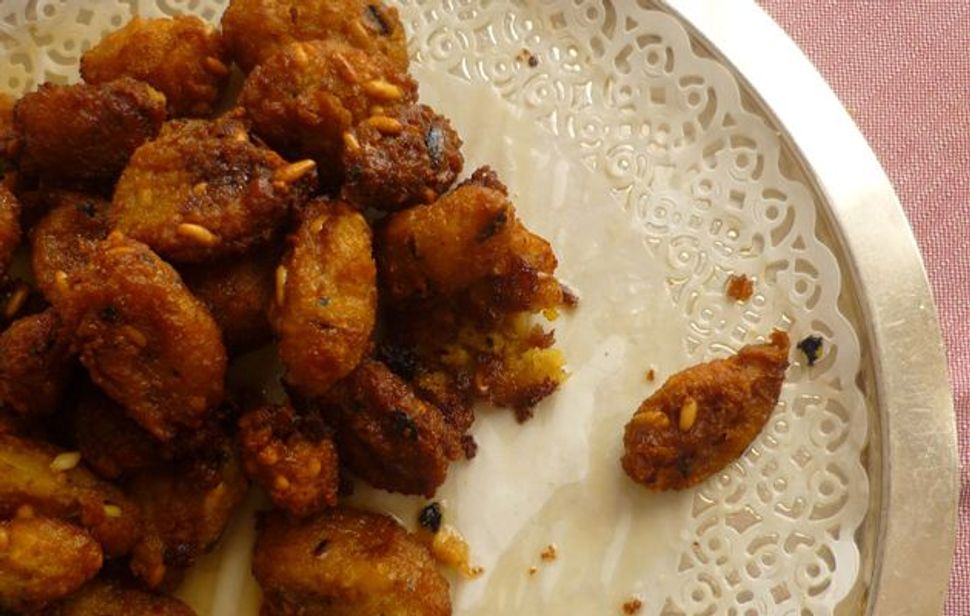 Poverty Cuisine: Pizzarelle, fritters with honey or syrup, are a traditional Passover dessert in Rome that evolved from the oil-heavy cuisine impoverished Italian Jews consumed in the 16th through 19th centuries. Image by Leah Koenig

Two years ago, I fell head over heels for a matzo fritter. My husband and I were celebrating our first anniversary in Rome, and through a series of lucky coincidences we landed an invitation to an event hosted by Giovanni Terracina, owner of Le Bon Ton Catering. An upscale kosher catering company in Rome, Le Bon Ton throws an annual fete to celebrate the release of Italy’s only kosher-certified novello, which is a young, barely fermented wine. We could not believe our good fortune: This event was clearly the culinary highlight of Rome’s Jewish community, and we had front-row tickets.

By the time we arrived, the room was already crowded with 200 sophisticated, impeccably dressed Roman Jews ready to throw elbows to get to the front of the food and drink tables. (Some things never change, even when you switch continents.) My husband and I pinched ourselves in bewildered delight as we joined the throngs in toasting glasses of novello and sampling such Italian-Jewish delicacies as fritto misto, A deep-fried vegetable cake that the hardworking staff could hardly replenish quickly enough, and hearty pasta e fagioli, pasta and bean stew. Then dessert came out — glasses of sweetened mint tea curiously served with boiled peanuts (it’s a traditional drink from Tripoli, we learned, served in honor of the several thousand Libyan Jews who moved to Rome in the 1970s), and platters of golden-brown fritters, drenched in honey and studded with raisins and pine nuts.

“Those are pizzarelle,” Terracina explained. “They are made with matzo meal and are a traditional Passover dessert here in Rome.”

But I was too busy swooning over the dessert before me to pay him proper attention. I have always had a particular soft spot for fried sweets. Given the choice between a piece of chocolate cake or a doughnut, my allegiances nearly always fall with the fryer. This particular fritter was lightly crispy outside, soft and chewy inside, and brightened with flecks of lemon zest. Dangerously good, in other words — enough so that, after I finished off my fifth or sixth fritter at Terracina’s event, my husband kindly suggested that maybe sticking a few in my purse for later was not the wisest idea.

Pizzarelle are loosely related to the Eastern European fried matzo meal pancake, chremslach — though chremslach are also eaten for breakfast, whereas pizzarelle fall more solidly into the dessert category. They also fall into a larger canon of fried foods traditionally enjoyed by Roman Jews. From the 16th through 19th centuries, Rome’s Jewish community lived an impoverished existence in a walled-in, segregated ghetto by the flood-prone Tiber River. At the time, frying foods in olive oil was considered one of the more economical methods of cooking. Over time, an oil-heavy cucina povera, poverty cuisine, was developed in the ghetto, transforming humble ingredients into delicacies like the famous carciofi alla Giudia, “Jewish style” fried artichokes; baccalà fritto, fried cod, and, of course, pizzarelle.

Traditionally, pizzarelle are served doused with either sugar syrup (pizzarelle con giulebbe) or, as we ate them, with honey. Italian Jews who follow Sephardic customs sometimes make them out of rice flour (pizzarelle di riso) instead of matzo meal. Other cooks stir leftover haroset from the Seder into the batter — a thrifty and tasty bit of food recycling. In the “Encyclopedia of Jewish Food” (Wiley, 2010), Gil Marks writes that modern variations sometimes include chopped chocolate, swap the traditional pine nuts for almonds, or are served with whipped cream or powdered sugar, like a funnel cake.

Passover, as virtually any holiday-observant Jew will attest, is rarely celebrated for its breathtaking desserts. My mom’s extended family used to jokingly call the dried-out cakes, tinned macaroons and sugar-crusted jelly candies that pass for sweets on Passover “Pesa-dreck.” There are a few Passover-friendly desserts that help shepherd a desperate sweet tooth through the week — like airy meringues, which were my favorite as a kid, and chocolate-and-caramel covered matzo, originally developed by “A Treasury of Jewish Holiday Baking” (Broadway, 1998) author Marcy Goldman, and lovingly known among food bloggers as “matzo crack” for its own addictive qualities. Still, even among these standouts, the pizzarelle we ate at Terracina’s event felt special, a delicious gift from Italy ready to make its second home in my Brooklyn kitchen.

Adapted from a recipe on Ronnie Fein’s website, Culinate, this recipe fries the *pizzarelle in vegetable oil, which today is the more economical choice. You can substitute olive oil if you prefer.*

Combine egg yolks, salt and olive oil in a medium bowl; set aside.

In a large, heavy pot or skillet, heat about 2 inches of vegetable oil over medium heat. While oil is heating, use wet hands to roll a walnut-sized ball of dough into a round; make rounds with remaining dough.

Fry rounds in batches (do not overcrowd pot/skillet), 1–2 minutes on all sides until golden brown. Drain on paper towels and serve warm or at room temperature, drizzled liberally with honey if desired.