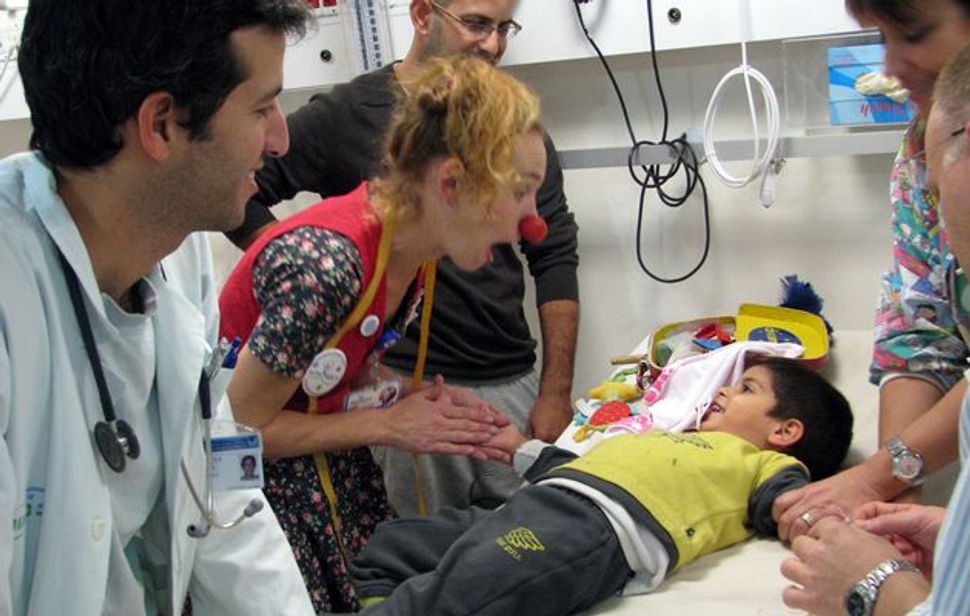 Some may view it as a double life: By night, she works in the most stereotypical of Orthodox women’s professions; by day, she’s a clown.

After dark, Freda Kaplan, a rebbetzin and wife of Dov Kaplan, chief rabbi of Israel’s Caesarea, heads to a local ritual bath, where she is the mikveh lady, supervising women who are taking their monthly post-menstrual ritual baths.

But in early morning, Kaplan exchanges her usual tichel, or headscarf, for a wig with a bow, enormous shoes and a fake red nose. With a spring in her step, and clowning partner Amit Nagdiman by her side, she strides into Netanya’s Laniado Hospital.

The comic duo heads to a waiting area where there are four patients: two elderly, two middle-aged. Haircuts and manicures are administered with the clowns’ oversized scissors; 2-foot-long silverware is playfully used. The patients, bored a few moments previously, are beaming with pleasure.

A cross section of Israeli society is suddenly brought together by humor. An 84-year-old Bukharin man begins telling the story of how his family came to prestate Palestine. The middle-aged woman next to him, a recent immigrant from Russia, scans her Hebrew-Russian dictionary in an attempt to follow the conversation. Two men, an Ethiopian and an Israeli Arab, look on from a nearby bench. The clowns, the Orthodox British immigrant Kaplan and “secular-as-they-come” native-Israeli Nagdiman, listen with interest.

Later in the day, the pair enters one of the glummest parts of the hospital: the ward for women who are encountering serious problems during pregnancy, or who have suffered miscarriages. After a few minutes in a room, four patients are happily chatting with the two clowns and to one another. A few jokes help distract the women from their surroundings, including a routine about the TV show “Big Brother” — which Kaplan admits she doesn’t watch, as her strictly Orthodox lifestyle means there is no television in her home. So instead, she recycles nuggets of information she has picked up from other patients.

Kaplan, a full-time mother and rebbetzin until 2003 when she enrolled in a medical clowning course after hearing about it on the radio, enjoys her work almost as much as the patients do. “People say, ‘How can you make the change in the morning from rebbetzin to clown?’” she said. “I tell them it’s much more difficult to make the change from clown to rebbetzin.”

Medical clowning isn’t an Israeli invention, and even in the late 1990s it was rarely practiced in the Jewish state. But whether as a result of the Jewish tradition of overcoming adversity with humor; an Israeli antipathy to hierarchy which helps make doctors receptive to clowns, or the work of the large not-for-profit Dream Doctors, which promotes medical clowning, it has become quite popular. Israel is fast becoming the world leader in this type of clowning, boasting almost 150 clowns for its 40 medical centers — many more than far larger European countries — and leading the way in academia and research, and in pioneering ways to integrate clowning into hospital practices.

“In other places in the world, when a doctor comes into the room, if there’s a clown, he or she goes out. Here, when the doctor arrives, he asks the clown if he can come in,” said Daniel Shriqui, project director of Dream Doctors, which has placed some 70 clowns in Israeli hospitals.

In 2009, Haifa University launched a master’s degree program in medical clowning, and the previous year, it began offering clowning therapy classes to its drama undergraduates so that they would have the option of pursuing medical clowning as well as standard stage or television work.

Today, there are various research projects under way regarding the effects of medical clowning, and in October, Dream Doctors will host an international medical clowning convention in Jerusalem to present research on the topic and to provide a forum for sharing experiences.

In Israel, clowns are a common sight even in the emergency room. Penny Chanucah, a clown at Meir Hospital’s Sapir Medical Center, in Kfar Saba, works evenings in the pediatric ER. She says that while some people presume that clowns would get in the way in such a pressured environment, in actuality, these entertainers keep things running smoothly. She recalled an event that took place a few weeks ago, when she was called into a room where a 4-year-old girl had been resisting for an hour attempts to run an ultrasound of her stomach. Within 15 minutes of Chanucah’s arrival, the scan was complete. “With clowns present, the doctors can concentrate on their procedures and not struggle with the non-cooperation of children,” she said.

Clowns in some Israeli hospitals go far beyond the normal tasks of entertaining children during painful or distressing procedures, like the taking of blood, and they escort youngsters to the operating theater, fit the mask for the anesthetic and sit by their bedsides as the children wake up. “I had seen the movie ‘Patch Adams,’ but I had no idea what a difference clowning could make until my 7-year-old son was in hospital last year and had a clown by his side during the most intimidating moments,” said David Hanning of Tel Aviv, a father of two children.

At Laniado, physiotherapist Orna Yaniv has been working on a new system that she hopes to soon present at a medical conference. It involves clowns actually helping to administer physiotherapy. A 3-year-old girl breezed through her session, as Kaplan and Nagdiman played games with her that enticed her to do all the things that Yaniv needed her to do — to blow out, to move her arm and so on. “When they are not there, the children cry much more. It makes for less effective treatment,” Yaniv said.

The medical staff in adult as well as children’s wards at Laniado put a lot of responsibility on the clowns. Some months ago, Nagdiman and Kaplan were ushered by nurses into a room where a mother in her 50s who was very close to the end of her life waited with her two children. “We said it really doesn’t seem appropriate, but [the nurse] said it is, and we always follow medical judgment,” Kaplan recalled. “Her children said that she was always a laugh, and they felt it appropriate she left this world with humor.”