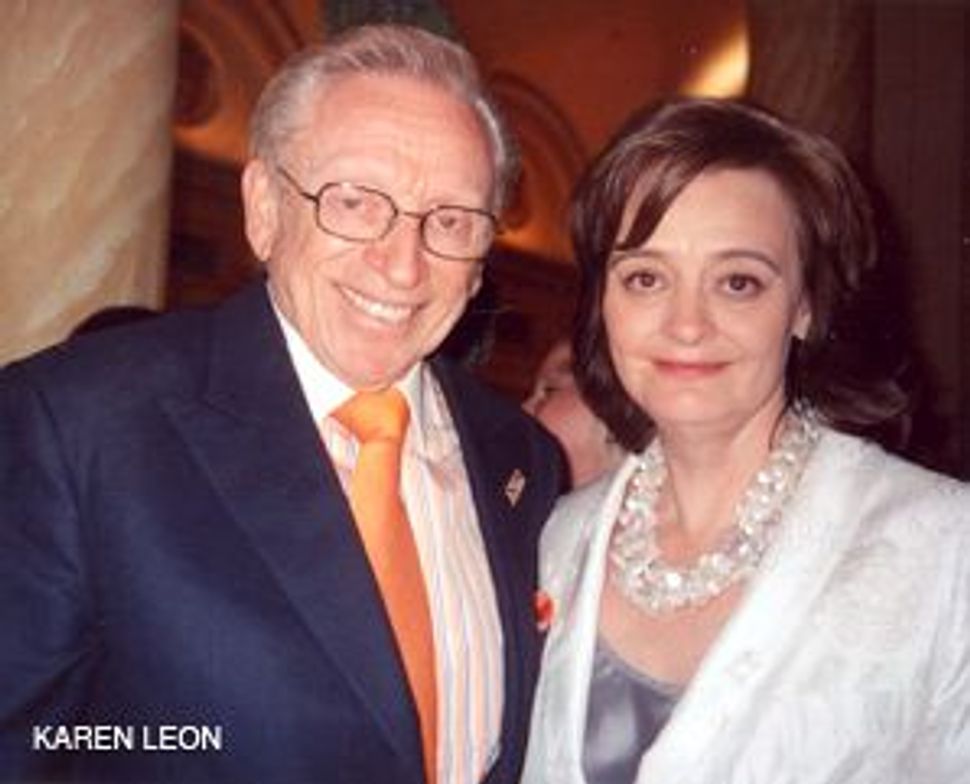 Outstanding: Larry Silverstein with Cherie Blair, the keynote speaker at the UJA-Federation event. 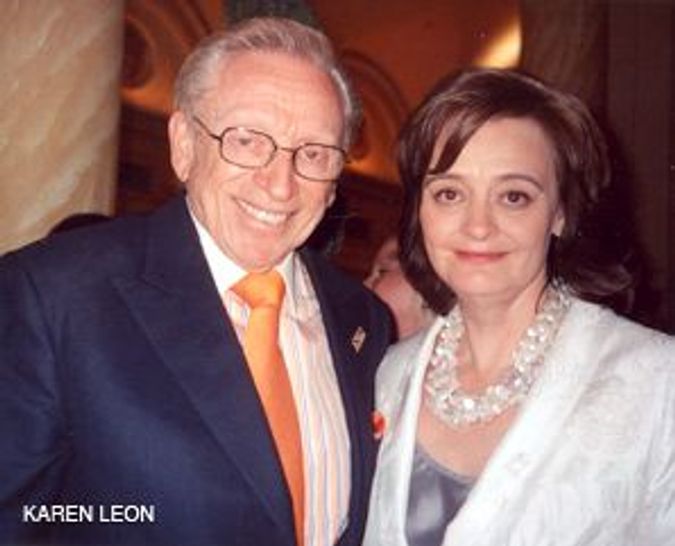 Outstanding: Larry Silverstein with Cherie Blair, the keynote speaker at the UJA-Federation event.

It was a double-nachas day for real estate mogul Larry Silverstein when his wife, Klara, and daughter, Lisa, received the Philanthropy Award at the May 29 UJA-Federation of New York’s Women’s Philanthropy inaugural luncheon. “Our greatest gift is to inspire future generations,” said Klara, whose roster of affiliations leaves one breathless: “All our children and grandchildren have made their mark on the Jewish and non-Jewish community.” Lisa, senior vice president of Silverstein Properties, is involved in the development of the World Trade Center site. The 700 guests who filled the New York Hilton ballroom enjoyed Grammy-winning songwriter and UJA Compassion Award recipient Phoebe Snow’s performance of “Everything I Do, I Do for You” — a tribute to her daughter born with multiple birth injuries, to whom she had devoted 31 years of loving care. The official credentials of keynote speaker Cherie Blair read: “Queens Counsel Barrister, Judge, County Court and Crown Court and Former Prime Ministerial Consort of Great Britain” (to us colonials: wife of former prime minister Tony Blair. All this is quite remarkable for someone who was raised by a single mother became the first member of her family to attend university. Specializing in employment and human rights, Blair is a patron of Norwood, a social service agency in England and Wales that provides services to disadvantaged and disabled Jewish children and their families. She stated: “Women live at the very heart of every community, transmit human and global values to the next generation.… Societies where women have a voice are the most prosperous and stable.”

Blair lauded the UJA women for their “collective power in making an impact, working together to maximize something I feel strongly about.… Because of my husband, I was able to travel around the world and to talk; but now, I am no longer hampered as the wife of the P.M., and there is no limit to what I can say.” She was presented with the book “The Jews of Yemen, The Last Generation,” by photographer Zion Ozeri.

The president of UJA-Federation of New York’s Women’s Philanthropy, Lynn Korda Kroll, informed: “There are 250,000 women in Jewish households living in poverty. The lives of 4 million Jews around the world are better, thanks to UJA-Federation.”

The luncheon was emceed by CW11 Morning News entertainment anchor Emily Frances. Among the handful of men in the sea of multigenerational women was UJA’s very happy executive vice president and CEO, Jon Ruskay.

At the May 13 gala for the International Sephardic Education Foundation, held at The Plaza, Iran-born real estate maven Daniel Roubeni, a Young Leaders Award recipient, got teary-eyed as he described leaving Germany (where he had grown up) “to find a Jewish wife in the U.S.” He found Alexandra, the love of his life, and confided that though she had Sephardic yikhes (lineage), her Ashkenazic roots led him to dub her an “Ashkefardi.” Reminded me of the Forverts’s legendary “A Bintel Brief” column, in which letters to the editor lamented “intermarriages” between Litvaks and Galitzianer or — worse — Rumanians! Recipient of the organization’s Lifetime Achievement Award, ISEF president Nina Weiner remarked: “Since my childhood in Egypt, I acquired from my Russian father and my Sephardic mother a deep belief in Zionism and a love of Israel. We have grown from distributing 300 college scholarships in our first years to 800 scholars studying on 21 campuses in Israel and 40 students getting their Ph.D.s abroad.” Gracing the evening was ISEF “patron angel” honorary chairwoman and philanthropist Lily Safra, wife of the late Edmond Safra.

Best-selling author and Harvard psychology professor Tal Ben-Shahar was the guest speaker. Temporarily transforming the ballroom of The Plaza into a classroom, he directed everyone’s attention to a video screen onto which a street montage was projected for a few seconds. The guests were asked to try to remember how many people they could count on a bus. All were proved wrong. Shahar’s directive turned out to be a ruse, a mind game. It wasn’t the number of passengers that we were asked to see, but something else in the montage that linked peripheral images to the issue of “positive leadership, happiness and unhappiness.” Like the rest of the audience, I missed the intent of the exercise. Nevertheless, it was an invaluable lesson in observation and memory.

In keeping with its mission, “We Build Minds, Not Buildings,” ISEF has helped thousands of young Israelis to pursue degrees, from B.A.’s to Ph.D’s, at major universities in Israel and abroad. Established in 1977 by philanthropist Edmond Safra and now under the chairmanship of his wife, ISEF reaches out to young inner-city Israelis. It is the antidote to what one of the speakers noted was “an alarming number of students in Israel dropping out of college.” As Weiner said: “ISEF’s thousands of students and alumni have exceeded our wildest dreams! Their perseverance in surmounting enormous challenges and their incredible intellectual achievements simply blow my mind.”

A live auction led by Christie’s auctioneer Jeff Rabin added pizzazz and shekels to the event. Sandwiched among tickets for two to Paris for a Pret-a-Porter/Valentino shopping spree ($4000), diamond earrings by Louis Glick (value $15,000), and a chance to play golf with a New York Jet or Giant ($5000) were bids for computers for “First in the Family” students ($2,000), an ISEF International Medical School Fellowship and “Adopt a PhD Student Studying Abroad” ($10,000). Impressive. The auction raised $175,000 and the dinner $1.2 million.

JEWISH BRAILLE INTERNATIONAL — EIGHT DECADES OF SERVICE TO THE BLIND

Larry King was supposed to serve as master of ceremonies for the May 21 Jewish Braille International dinner, held at the Harmonie Club. Unable to attend, he sent regrets and congratulations to JBI’s chairman of the board, Judith Tenney, on her 80th birthday, and to JBI’s president and CEO, Ellen Isler. Founded in 1931 as the Jewish Braille Institute by Leopold Dubov, the blind son of a rabbi, and Rabbi Michael Aaronson, who had been blinded in World War I, today the JBI library serves 35,000 individuals in 30 countries in eight languages — all at no charge. Among the dinner guests were writers who had read all or part of their works for JBI’s oral library: Morris Dickstein, Alan Isler, Francine Klagsbrun, Cynthia Ozick, Anne Roiphe, Betty Rollin and Hilma Wolitzer. In the 1960s, as a volunteer for National Council of Jewish Women’s “Reading to the Blind” Project, I was asked to tape Henry Roth’s “Call It Sleep.” Though the book is written in English, its narrative is in “Yiddish” with English, Russian and Polish sprinkled throughout the text. After weeks of reel-to-reel taping, I sometimes found myself sounding like an Eastern European immigrant who had just stepped off the boat. The payoff was several calls and letters from “listeners” who were ecstatic that I got the Yiddish just right and that I reminded them of their immigrant parents and grandparents, whose articulation Roth immortalized.

During the celebration of the JBI’s 70th anniversary in 2001 at the New York Public Library, Ozick declared: “Art, learning, history, philosophy, poetry, prayer, the pleasures of story… come to us through eye and ear. Mind is seeing and seeing is knowing — why else do we speak of insight? But sometimes the light will unfortunately dim, and then it is that JBI restores the universe to those deprived of full entry.… ‘Let there be light,’ said JBI, and suddenly there rumbles out world upon world of illumination, in the form of literature in its every manifestation… all on audiotape or in Braille.… Mind unlocked and freed to see, to know, to understand, to receive the blessed light of Reading, the corridor to life enriched.”

Helen Keller, who for 37 years read the monthly magazine Jewish Braille Review, wrote: “It is splendid that the Jewish blind and the rest of us can have within reach of our fingers a periodical so rich in stimulating thoughts. Eagerly I gather its gleanings from history, poetry and art. I get so much to think about from the surveys of world problems and philosophical discussion.”