Blood and Boils and Beasts, Oh My! 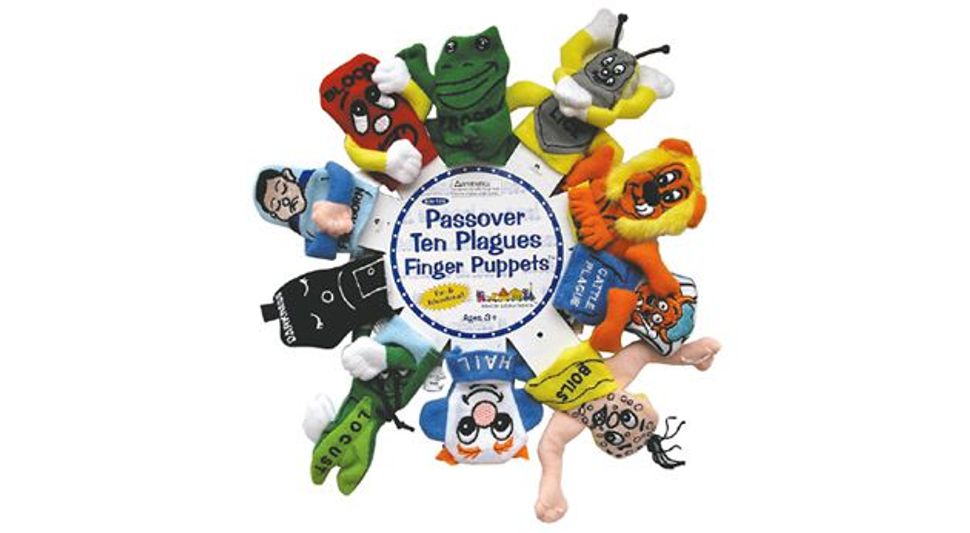 We’ve been at the Passover Seder of our friends Helen and Tanny for each of the past dozen years. In addition to being full of good fellowship, spirited singing and delectable food, the Seders feature props illustrating the 10 Plagues that are so startling that, some years, my youngest child runs out of our hosts’ front door to wait it out on the porch.

Tanny, a science guy with a well-developed sense of silliness, enjoys illustrating the 10 plagues with props and gags ranging from a rubber hand attached to a broomstick (God’s “outstretched hand”) to live Madagascar cockroaches (standing in for locusts) and an enormous preserved frog (for the plague of the same name). The props bridge the distance we feel from the Seder story, giving us a sense of just how horrifying the plagues must have been.

Helen and Tanny’s children are several years older than mine and, perhaps, more accustomed to their father’s surprises. And to be sure, at most Seders, people run through the recounting of the 10 Plagues with little more than a few drops of wine or grape juice spilled out onto a plate. But even without Tanny’s props, it’s easy to appreciate just how frightening the plagues are, particularly from a child’s perspective.

Just before the plagues are imposed on Egypt, God illustrates divine power by turning Moses’ cane into a serpent, and then does the same to Pharoah’s sorcerers’ staffs, which are eventually swallowed by Moses’.

That’s scary enough, and it’s just the start. It’s not enough to persuade Pharaoh to free the Israelites, so God introduces increasingly calamitous efforts, also known as the 10 Plagues, to convince him: From rivers running with blood to oozing skin boils to crop-devouring locusts to the killing of the eldest children, God uses every arrow in his impressive quiver.

Like much of Torah, it is hardly the stuff of “Barney & Friends” or “Sesame Street.” And it leads me to wonder: Is it possible to engage with the Seder’s graphic illustrations of God’s might without leaving the kids emotionally or spiritually scarred?

“Some of the things [in the Haggadah] sound amazingly scary and awful,” said Miami-based psychotherapist and author M. Gary Neuman.

Relating them graphically can be frightening for kids. But presented correctly, experts say, they convey effective messages about God’s desire for how people should treat each other, and their relationship with God, respectfully.

The Seder’s focus shouldn’t be on the literal events it recounts, said Neuman, an Orthodox rabbi and father of five children. “It’s supposed to speak to children at whatever level they’re at.”

“There are a lot of wonderful life messages in there, and that should be the focus rather than having to force in the actual details. We do that with children all the time,” Neuman said — for example, when talking with young children about how babies are made.

The plagues can be presented to children (and adults) as consequences rather than as punishment. “I don’t like it being all about God slapping people in the face. Better than being punitive, the focus can be on that relationships are reciprocal. You can talk about the benefits of relationships when people work to be close to God or family or friends,” Neuman said.

To engage children, he suggests acting out various Passover scenes or playing charades. A child can be Moses approaching Pharaoh, telling him, “Let my people go,” while someone else can be Pharaoh, singing, “No, no, no I will not let them go.” Then Moses might bring the plague, and children can act as frogs or wild animals, or toss Styrofoam balls for hail.

Clark Goldstein, associate psychologist at the Child Mind Institute’s Anxiety and Mood Disorders Center, suggests that parents take their cues from their children, paying attention to the child’s age and disposition.

If a child thrills to scary movies, for instance, then let him play-act some of the plagues with finger puppets, toy animals and insects. If a child is more inclined to be anxious about the unknown or frightening, then don’t dwell on anything plague related.

“Tell the story in an engaging way, and solicit questions,” Goldstein said. “If the child brings up concerns, try to address them. Try not to ask leading questions, like, ‘Does that section scare you?’ Let them lead with any concerns or questions they might have.”

Goldstein also suggests focusing on the bigger concepts rather than on the plague details:

“We don’t need to get into every aspect of every detail if we think that will be distressing. Emphasize the miracle, God’s kindness [to the Israelites]. Sometimes things are not clear, but we’ll have trust that God is doing what God does with a purpose.”

Whatever meta-messages you choose to emphasize, Neuman said, the Seder’s focus “should be about the children, and connecting to them. A child’s eyes see things as very pure. The rabbis intended this to be for the children, but adults benefit from that perspective, as well. It’s about connecting with the child within.”

Blood and Boils and Beasts, Oh My!