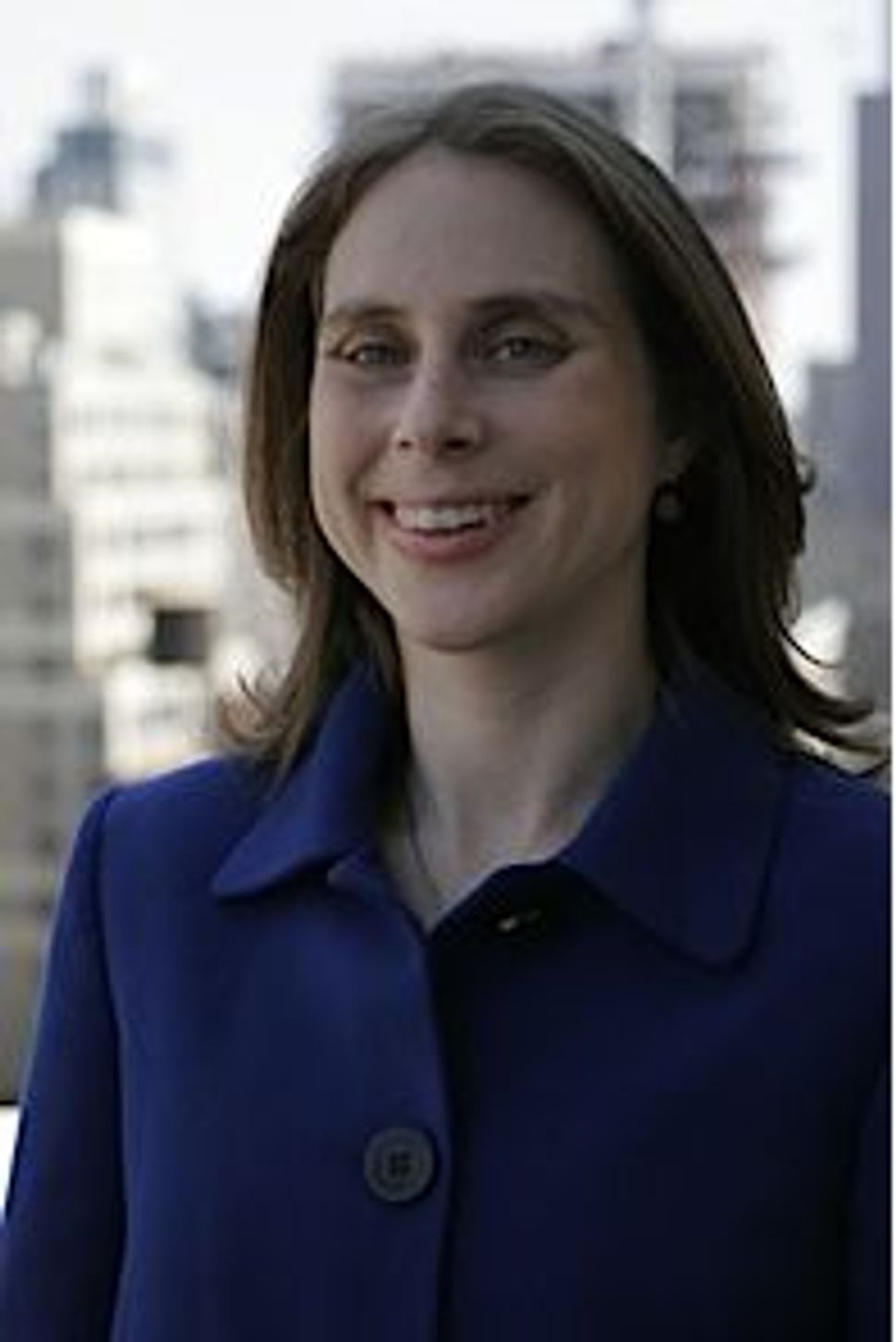 Jewish social justice guru Jill Jacobs is known for her vocal advocacy work on behalf of society’s most marginalized, including undocumented workers and the poor. Now, as newly appointed executive director of Rabbis for Human Rights-North America, she will engage with the most incendiary issue in American Jewish life: public criticism of Israel for its treatment of Palestinians.

“I’ve spent the last 10 years in organizations where I couldn’t talk about Israel, and I felt like it was a lack,” Rabbi Jacobs told The Forward. “As a rabbi I have a responsibility to talk about how the Jewish state acts. I want it to represent my values, to be an example to the world of how Jews act with other people. I found it sometimes false to try dealing with North American Jewish issues without ever dealing with the elephant in the room.”

Rabbis for Human Rights – North America announced April 6 that it had named Jacobs its executive director. She will begin her new post April 11.

“Jill is one of the leading voices of the Jewish social justice movement,” said Rabbi Charles Feinberg, co-chair of the board and a rabbi at Adas Israel Congregation in Washington, D.C., in announcing the appointment. “She will bring a strong Jewish religious and ethical voice to bear on the pressing human rights issues that cry out for action.”

The organization is an affiliate of Israel’s Rabbis for Human Rights, which bills itself as “the rabbinic voice of conscience in Israel,” and focuses primarily on defense of Palestinian rights. Its North American affiliate tackles human rights issues in the United States, such as the U.S. government-backed torture of detainees, as well as Israel-related ones.

Jacobs said her biggest challenge will be to convince American Jews that the treatment of Palestinians by the Israeli government and Jewish settlers should be their concern. “We want to help both rabbis and laypeople understand that the best way to be pro-Israel is to guarantee the human rights of Palestinians. We have to take these issues on in a way that will get rabbis and laypeople involved passionately and make sure that human rights are protected,” she said.

When Jacobs takes the helm of the small but influential Manhattan-based, not-for-profit organization, she will face challenges both financial and ideological.

Like many organizations, RHR-NA has struggled with fundraising. In 2009, the last for which tax filings are publicly available, it received $477,000 in contributions, less than half of what it did the year before, when it raised just over $1 million. RHR-NA, which has four staffers plus two interns, has a 2011 budget of $600,000.

“Of course fundraising is always a challenge,” said Jacobs, “but I think there’s going to be a lot of excitement about building the pro-Israel camp that is trying to create democratic states in Israel and the Palestinian territories.”

Some warn that she may be surprised by the ideological and political challenges.

“Any conversation at all about the state of Israel today is the most toxic issue in American Jewish life,” said Rabbi Irwin Kula, president of CLAL: The National Jewish Center for Learning and Leadership.

Kula, who describes Jacobs as “very talented,” said that she should broaden RHR-NA’s appeal beyond its base of politically progressive Reconstructionist, Reform, Renewal and Conservative rabbis.

Jacobs first became an activist in high school. She saw swollen bellies that contradicted her principal’s assertion in a local newspaper that there was no teen pregnancy in the Framingham, Mass., school, which did not offer its students sex education or condoms. With friends, she convinced the board of education to adopt a sex ed curriculum.

There was “lots of dramatic fighting in public from people who were on the right,” she said, and her group gave up the condom fight because it was one they knew they wouldn’t win in the conservative Boston suburb.

Though she was raised in a Conservative synagogue-affiliated family, she didn’t connect Judaism to social activism until in rabbinical school at the Jewish Theological Seminary several years later.

“I would go back and forth between JTS, where I was involved in esoteric texts, and Harlem, where I would talk to a woman being evicted. I decided to look at whether Jewish text had anything to say about it, and found pages of Talmudic discussion about when you’re allowed to evict somebody. This was in 1998, when nobody there was talking about social justice and for me it felt like the first time both parts of my life came together.”

After ordination Jacobs worked at the Jewish Council on Urban Affairs and then became the Jewish Funds for Justice’s rabbi-in-residence. She left in 2009 to become a Mandel Jerusalem Fellow and after returning to the U.S. last year, began developing a program, dubbed Ma’aseh (or “Action”), to train rabbinical students and educators as social justice leaders. “When the RHR opportunity came up it seemed like a natural fit,” she said. She has been on the group’s board of directors since 2007.

Running RHR-NA will not be Jacobs’s first time advocating for Palestinian rights. In rabbinical school, she wrote an essay that was baldly critical of Israel, for a student-edited, JTS-published newsletter. The piece was killed by JTS but distributed independently by the editor, who had quit his post in protest. Israel-based Conservative Rabbi Daniel Gordis sent out an open letter to his e-mail list calling Jacobs’s point of view “naïve” and “myopic.” She wrote to him, he responded and the matter ended up on the pages of The Forward and The New York Times.

This week, contacted by The Forward, Gordis wrote an e-mail that foreshadows some of the critique Jacobs is likely to face. “The test for Rabbi Jacobs, and for RHR in general, is whether ‘human rights’ really includes Jewish human rights as well as Palestinian human rights…many of us have been disappointed to see RHR issue relentless critiques of Israeli policy and behavior, but only token criticism of Palestinian terror, an ongoing refusal to recognize Israel…and much more.

“For RHR to become relevant to many more Jews, it is going to have to strive for much greater balance. I hope that Rabbi Jacobs is interested in furthering that goal,” Gordis wrote. “Time will tell.”