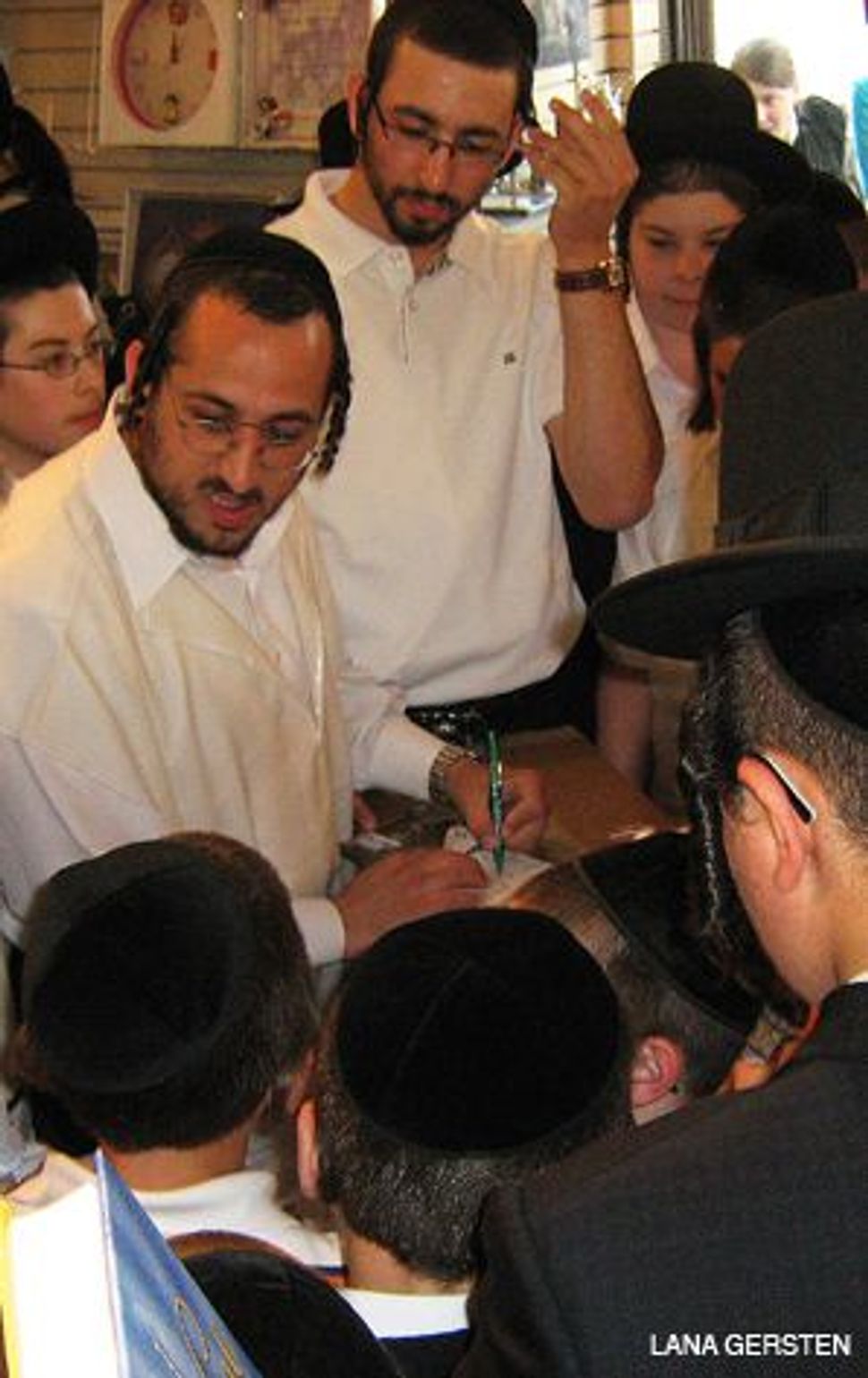 BOUNCE BACK: The Hasidic pop musician Lipa Schmeltzer was surrounded by fans at a recent appearance following the release of his new CD.

On June 22, Hasidic singing sensation Lipa Schmeltzer stepped out to greet his fans in one of his first large-scale appearances since a firestorm erupted over the cancellation of his concert, “The Big Event.” 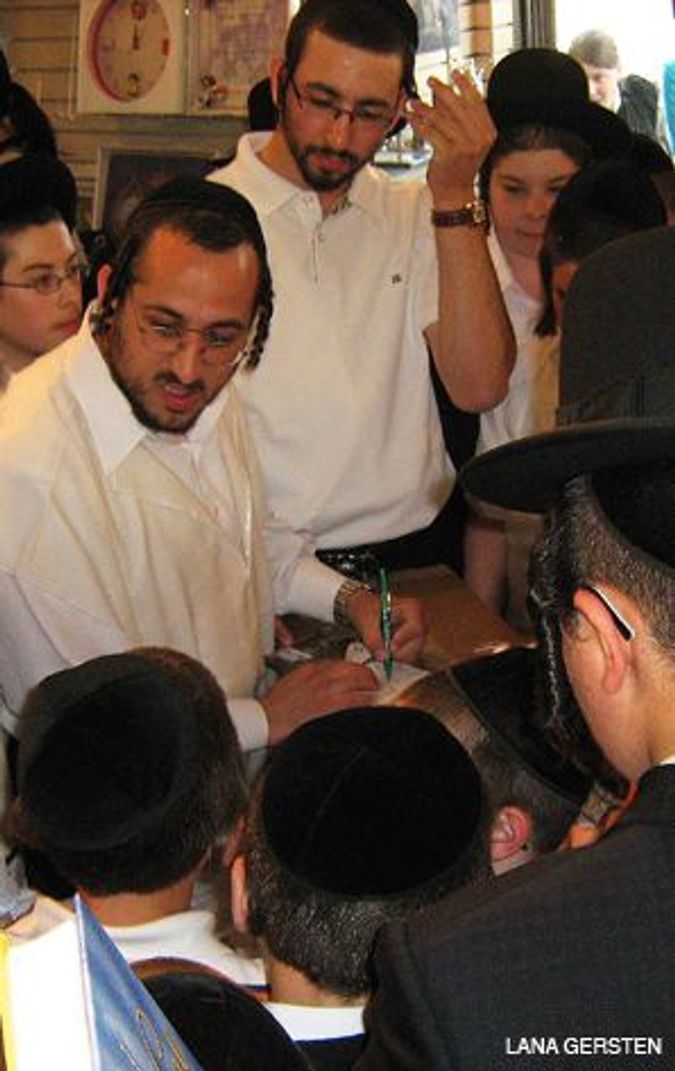 BOUNCE BACK: The Hasidic pop musician Lipa Schmeltzer was surrounded by fans at a recent appearance following the release of his new CD.

Making appearances at three stores in the Boro Park neighborhood of Brooklyn just one week after the release of his newest CD, “A Poshiter Yid” (“A Simple Jew”), Schmeltzer is back — and says that he is now busier than ever.

The March 9 concert, which was expected to draw a crowd of around 5,000 to New York City’s WaMu Theater at Madison Square Garden, with separate seating for men and women, was abruptly canceled after an edict was issued by 33 rabbis in the Hasidic community, forbidding people from attending. Schmeltzer’s music was declared to cause “lightheadedness” and thus lead people off a religious path.

The ban, which came as a shock to organizers who claimed that the concert was fully kosher, led Schmeltzer to back out of the event, creating a maelstrom of controversy in this insular community.

“It bothers them that this guy who dresses up in Hasidic ways brings to them a certain music that before then was only for Manhattan,” Schmeltzer said in a phone interview. “You have to give them a way of kosher entertainment. It’s a mitzvah for me to do this.”

For some of his critics, though, his music, which blends traditional Yiddish and Hebrew lyrics with more modern beats, inappropriately transports secular music into the community. For others, the size and scope of the concert, and Schmeltzer’s elevated status as a celebrity, were cause for concern.

“In American culture, unfortunately, role models are not just intellects and people of good deeds, but entertainers,” explained Rabbi Avi Shafran, director of public affairs for the ultra-Orthodox organization Agudath Israel of America. “From an Orthodox Jewish perspective, an entertainer is not a role model.”

The fact that “Mr. Schmeltzer’s style had come to mimic certain parts of society’s lowest popular culture expression concerned them,” Shafran said of those who signed on to the ban.

Schmeltzer, who makes the majority of his income by performing at weddings, bar mitzvahs and other celebrations, asserted: “If I make up a song or any other Jewish artist makes up a song and the style is something new and uplifting, I don’t think there’s anything wrong with me. I mean, who made up a Jewish style?”

According to Ezra Friedlander, founder and CEO of the Brooklyn-based public relations firm The Friedlander Group, Schmeltzer is “even a bigger superstar than he was before. Controversy has that magical effect of making you larger than life.”

At Mostly Music, where Schmeltzer made his first stop of three to greet fans last month, crowds of men, women and children, many donning head scarves or black hats, filled the store to get a glimpse of the superstar.

“I think the controversy has created him,” said onlooker Rivka M., a resident of the Bayswater neighborhood in Queens who asked that her full last name not be used. “The longer adults decry his music, the more popular he gets.”

Rivka, whose 17-year-old son listens to Schmeltzer, and who previously found his music to be offensive because of what she describes as his hip-hop and rap influences, now lauds Schmeltzer for his response to the controversy. In her opinion, the fact that he listened to the rabbis and took their advice legitimized him and his music.

“I can definitely speak for myself in that I’m personally less negative about his music, knowing he’s a mensch,” she said. “The concert situation for me made his music okay because he’s okay.”

Though Schmeltzer denies that he changed his style of music since the ban was issued, his promoter, Gershy Moskowitz, admits that his new album is more “kosher” than the previous one. In total, Schmeltzer has released eight other CDs.

“The other ones are jazzier,” said 13-year-old Ushi Kleinbart, while waiting in the Eichlers Judaica store to meet the musician. “This is more of a normal tape.”
Even with his new sound, people seem to be responding well. According to Avigdor Tonbowski, an employee at Mostly Music, the phones rang off the hook and people waited in a long line that snaked out the door to buy Schmeltzer’s CD the day it was released.

“His CD is simple. You don’t have to be a rebel or a rabbi. I love it,” said 17-year-old fan Avrumi Dinkel, a Boro Park resident.

“We have so many problems out there that music should not be one of them,” Schmeltzer said. “I’m selling thousands and thousands of CDs. There’s always going to be people out there who don’t like it. I don’t care.”

Lana Gersten is a writer living in New York.