Tel Aviv Mayor Wants Illegal Immigrants To Feel at Home — Diplomats, Not So Much 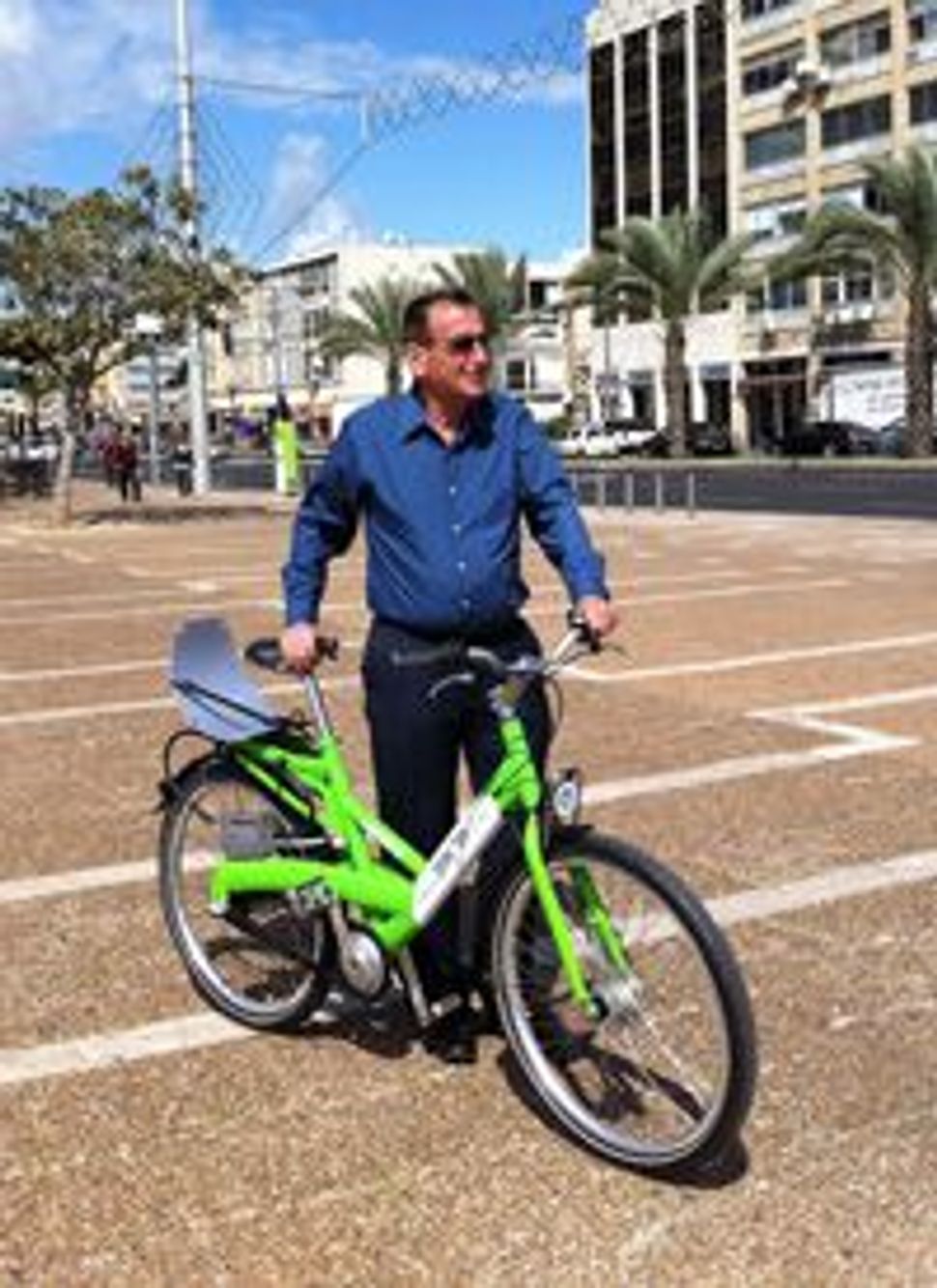 Getting There: Tel Aviv?s mayor, Ron Huldai, poses with one of the new bicycles that will be available for rent. Image by Tel Aviv-Yafo Municipality

He’s the budget-conscious, business-friendly mayor of his country’s most cosmopolitan city. Amid a building boom that has transformed the city’s skyline, critics accuse him of abetting gentrification and pricing out lower-income residents. Meanwhile, at a time when concern over illegal immigrants is playing out in a big way on the national political stage, he has been a staunch defender of providing municipal services to this marginalized group. He’s also busy adding mile-upon-mile of bike lanes.

No, the mayor in question isn’t Michael Bloomberg, and the city isn’t New York, though that is where Tel Aviv Mayor Ron Huldai is headed this week, to be the guest of honor at the April 13 gala for the American Friends of the Tel Aviv Museum of Art. 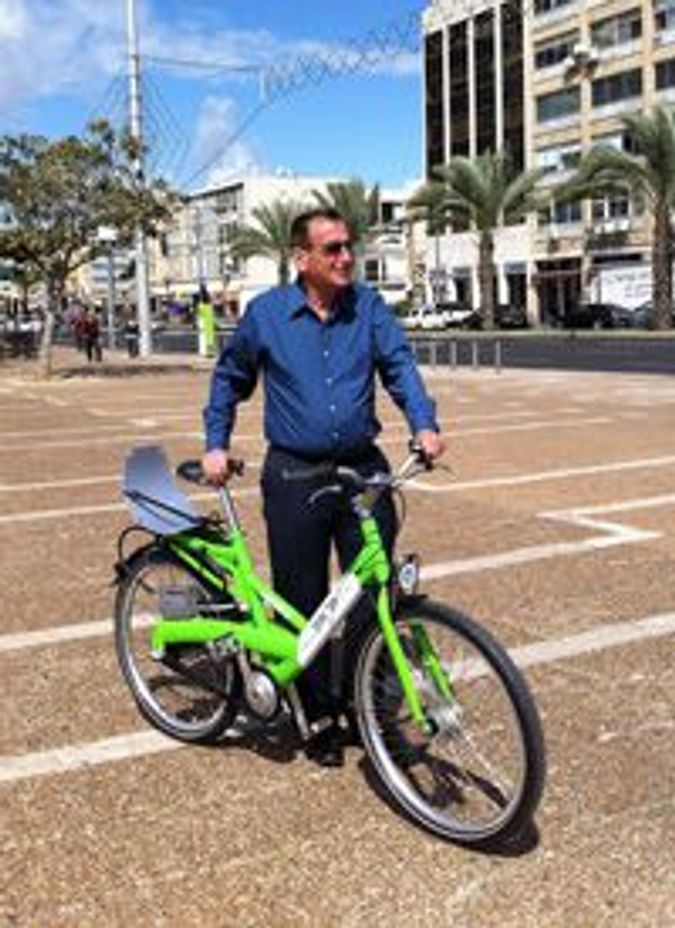 Getting There: Tel Aviv?s mayor, Ron Huldai, poses with one of the new bicycles that will be available for rent. Image by Tel Aviv-Yafo Municipality

Even though Huldai’s city, with some 400,000 residents, is only 1/20th as populous as the Big Apple, he has reckoned with many of the same issues as his New York counterpart. One of the most vexing has been the issue of illegal immigration.

Since Huldai became mayor in 1998, a new demographic has arrived in his city. In the past six years alone, more than 35,000 Africans have sneaked into Israel, and more than 20,000 reside in Tel Aviv, dramatically changing the character of many neighborhoods. Many have fled conflict zones and thus are not being deported, yet most have not been granted refugee status by Israel and are not legally permitted to work.

While there is considerable anxiety about this influx, both on the national level and locally, particularly in the southern Tel Aviv neighborhoods that have been the epicenter of the influx, the 66-year-old Huldai strikes a note of calm.

“Once I have a homeless person on the bench of the park, he’s a Tel Avivian,” he told the Forward in an April 4 interview. “I have to take care of him. I can’t say he is wrong — no, he is here, and I have to deal with him.”

His approach to this issue has flown in the face of that of the national government, which often acts as if illegal immigrants don’t exist — not making provisions for them or establishing any firm policy on how they should be treated, lest doing so would encourage further illegal immigration. Even when the national government tried, for a period in 2009, to reduce the impact of the influx on Huldai’s city by issuing a special decree ordering illegal immigrants to vacate the center of the country, Huldai continued with efforts to provide for their practical, social and cultural needs.

Huldai’s openness to foreign residents has characterized his 12 years as mayor. In 1999, just one year after taking office, he established an agency, Mesila, within the municipal welfare department to help foreign nationals with problems in their day-to-day lives. This was before the major influx of Africans, and it has expanded to cope with growing demand.

Mesila, which is funded by private donations as well as public money, has helped to ensure that children who are residing in Tel Aviv illegally are placed in schools. Huldai has allocated extra manpower to institutions in areas where illegal immigrants are concentrated and backed adult education initiatives for them. In 2009 — at the height of the national government’s attempt to expel illegal immigrants from central Israel — Huldai supported the opening, in Tel Aviv’s Lewinsky Park, of a multilingual library to cater to the illegal residents’ literary needs.

Huldai is highly critical of the government for failing to come up with a clear policy on illegal immigrants. “Please set a policy that everyone will understand,” he said, arguing that the issue needs national leadership instead of the current situation where the burden rests on municipalities.

Even as he continues to expand municipal services for illegal immigrants living in Tel Aviv, Huldai has urged the national government to get tough on the issue. “The State must adopt a strict immigration policy, and close the borders,” Huldai told representatives of Tel Aviv’s southern neighborhoods at a meeting last month, according to the Israeli news site Y-Net.

Though some Tel Avians are furious about illegal immigration, Huldai has weathered the storm. He won reelection in 2008 with 50.6% of the vote, defeating the runner-up, leftist Knesset member Dov Khenin, by 16 percentage points. Today, Huldai is one of Israel’s longest-serving mayors.

While Huldai has faced criticism from the left over issues like gentrification, overdevelopment and the rising cost of living in Tel Aviv, his supporters have seen him as a steady hand at the municipal helm. Before he took office the city was running a deficit, but he balanced the books, and for the past eight years the city has been in the black. During Huldai’s tenure, the city’s population has increased by over 10%, following four decades of decline.

His local popularity also stems from his insistent focus on the needs of the city’s residents. He has argued that when he became mayor, the city was catering to commuters and tourists at the expense of the needs of locals. He has focused on quality-of-life issues such as cleaning up streets and beaches, making the seafront more accessible by renovating and extending the city’s beach promenade, and making zoning changes such as moving nightclubs out of residential areas.

Making Tel Aviv more bike-friendly has been a special focus of Huldai’s tenure. An avid cyclist, he keeps a bicycle on display in his office by his desk and has added 60 miles of bicycle lanes. This April, Tel Aviv is launching a program that will allow people to rent and return bicycles at docking stations across the city.

Huldai’s background is typical of Israel’s political elite. He was born under the British Mandate in 1944 and raised on Kibbutz Hulda near Tel Aviv. He had a long and varied military career, serving as a combat pilot for 26 years, including during the Six Day War and Yom Kippur War. He served as commander of two of Israel’s largest air force bases and retired from the military with the rank of brigadier general.

After the military, he moved into education, becoming principal of the Herzliya Hebrew Gymnasium, the first Hebrew-speaking high school. He entered local politics aligned with Labor — though in the elections for his third and current term he ran on a joint Labor-Kadima ticket.

One of Huldai’s most controversial projects this term has been a program to build new affordable housing in Jaffa that will only be open to Arabs. When the 100-unit program, which is still in the planning stages, became public in February, there were protests against alleged discrimination from angry Jews in Jaffa, the fast-gentrifying heart of the local Arab community.

But Huldai argues that while theoretically all sales and rentals in Israel are open to everyone, Arabs face discrimination, meaning that positive discrimination for Arabs is a justifiable way of righting a wrong.

“When we identified a special problem in Jaffa, we had to create a special solution…. So we are creating a criterion for young couples in the society of Jaffa that cannot acquire apartments in Ben Yehuda,” he said, referring to a street in mostly Jewish central Tel Aviv.

Despite Huldai’s pluralism, there is one group he is not so happy to accommodate in his city — foreign diplomats or, more precisely, their embassies, which are located in Tel Aviv because of the contested status of Jerusalem, Israel’s capital. Huldai said that he tells every ambassador he meets: “Next year in Jerusalem!”

“I’m giving them the services of the residents of Tel Aviv, but you have to know that I would like [them] to move to Jerusalem….” he explained. “I’m saying it’s insulting because if I would decide that Oslo is not the capital of Norway, they would be insulted.”

Tel Aviv Mayor Wants Illegal Immigrants To Feel at Home — Diplomats, Not So Much