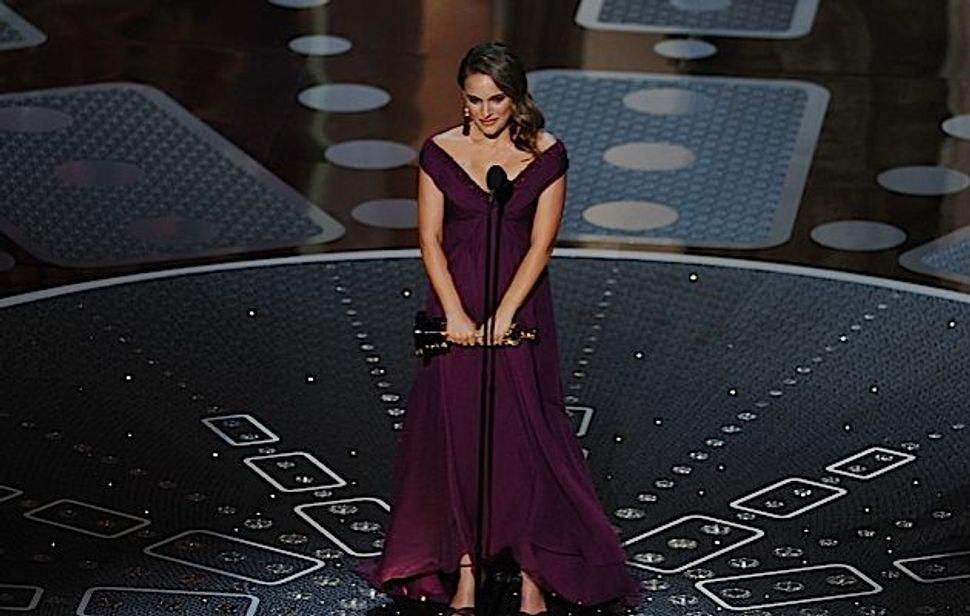 Mommy Stir Up: Natalie Portman set the blogosphere abuzz when she called her impending motherhood her ?most important role in life.? Image by Getty images

Before my daughter was born, I didn’t tell a number of my editors that I was pregnant. It was an accident-on-purpose slight of omission, and started because I work remotely so much of the time and barely ever see them. It continued because one of my (male) editors had assured me that, like his wife, I would be “unable to write” in the weeks after the baby was born.

At the time, I was proposing a new project, something I anticipated revving up in the month or so after giving birth. “You won’t do that then,” my editor said, confidently, snidely; chauvinistically. “You’re giving birth. The baby will be what you do. My wife wasn’t able to do anything for at least six weeks.”

Bewildered, angry, I clammed up. It ended up being a problem: I had stories due while I was in the hospital, and I texted frantically between contractions that my edits “might be a little delayed.” But, perhaps just to prove the editor wrong, I wrote stories the week I got home.

Granted, most bosses these days don’t use such (legally actionable) language. But the idea that motherhood is one’s greatest role, that which surpasses everything else, still has the capacity to divide — and mostly the division is among women.

Just look at the maelstrom that dusted up when first lady Michelle Obama declared herself a mother above all else. “As a self-described mom-in-chief,” she said on the campaign trail last fall, stumping for Democrats in the midterm elections, “my first priority in the White House has been making sure that my girls are happy and healthy and adjusting to this new life. Like every parent I know, my children are the center of my world. My hopes for their future are at the heart of every single thing I do.… You see, more than anything else, I come at this as a mom.”

It wasn’t the first time Obama described herself this way — and we all know she gave up a thriving career in Chicago when her husband decided to helm this country. Salon’s Rebecca Traister called it the “momification of Michelle Obama” when Barack Obama won the office and Michelle Obama suddenly was a mom above all else (despite her Princeton/Harvard mentor-to-her-husband pedigree). Feminists everywhere debated the strictures of being first lady, an office that forces women, again and again, into being agents of a (male) president’s family myth, subsuming their own careers, needs and identities into that of a holiday-card-worthy tableau.

The latest mommy to stir up ire isn’t a politician, indeed isn’t yet a mom, but a resplendently pregnant young Jewish actress. As Oscar night 2011 wound down, Natalie Portman, her swollen belly wrapped in luxe layers of Mulberry colored silk, took the stage to accept her best actress award — and then, among other shout-outs, thanked her fiancé for giving her “most important role in life,” a reference to her impending motherhood. The Twitter-Facebook-blog-o’sphere went crazy. My friend and colleague Lizzie Skurnick snorted, “Like, my garbage man can give you your greatest role in life too, lady,” and Salon’s Mary Elizabeth Williams queried: “But is motherhood really a greater role than being secretary of state or a justice on the Supreme Court? Is reproduction automatically the greatest thing Natalie Portman will do with her life?”

The debate raged on for days.

Part of the problem was a two-way split. First, there was the divide among women who are already mothers: those who work, those who work a bit, those who have shelved work for the time being. And then there was the divide between mothers and non-mothers: If motherhood is the most important role, have we negated everything else we do? Does a woman who does not become a mother never reach an apex? What if motherhood isn’t happening — because a woman has decided to skip it or because she can’t have children? What then? Is there no important role?

I asked a handful of Washington-based bloggers and thinkers for their response to the uproar.

Melissa Ford, who writes a blog about infertility, stirrup-queens.com, wrote via e-mail: “I’m not surprised by Portman’s statement or the way she views motherhood. She is the daughter of a reproductive endocrinologist. She knows quite well that fertility isn’t a given, and I see her statement as more of an acknowledgment that she isn’t taking her path to parenthood for granted. That she knows it could be otherwise.”

Said Devra Renner, co-author of the book “Mommy Guilt” (AMACOM, 2005): “I grew up with the idea of feminism, of respecting everyone’s decision and giving them the support and power to make it.”

But it was Robin Waldman, who has a blog called “The Not-Ever-Still Life” (about birthing three kids in four years), who captured it best for me:

“Even though the label” — greatest — “makes me uncomfortable, motherhood has influenced every other facet of my life. So maybe by the way it causes me to make decisions, forgive behaviors, cry empathetically, wish for grace, etc. — maybe it is my greatest role in the sense that it’s the one that sets the tone for my life.”

I think that’s it. It’s not a competition between women for motherhood over work. It’s about an internal, endless, dialogue about the all-encompassing nature of early parenthood. And let’s be frank, this is all about early parenthood. Someday, I shudder to realize, my daughter will pack a backpack and I’ll beg her to call once in awhile, as she strikes off for Zurich or Zimbabwe or Zaleszczyki.

But for now, the role of mother seeps into every decision, every choice: Do I get to take this assignment if it means this much travel? How about if it means a day or two less? Should we play more, do more, be together more?

“Great” and “important” modifying the word “role” might not necessarily be defined as “better than” — though they might be. They might also mean “bigger than,” because it is. Even if Portman’s appearance in “Black Swan” was the role of a lifetime, the film wrapped. Best she realize now that parenthood isn’t a walk-on part.