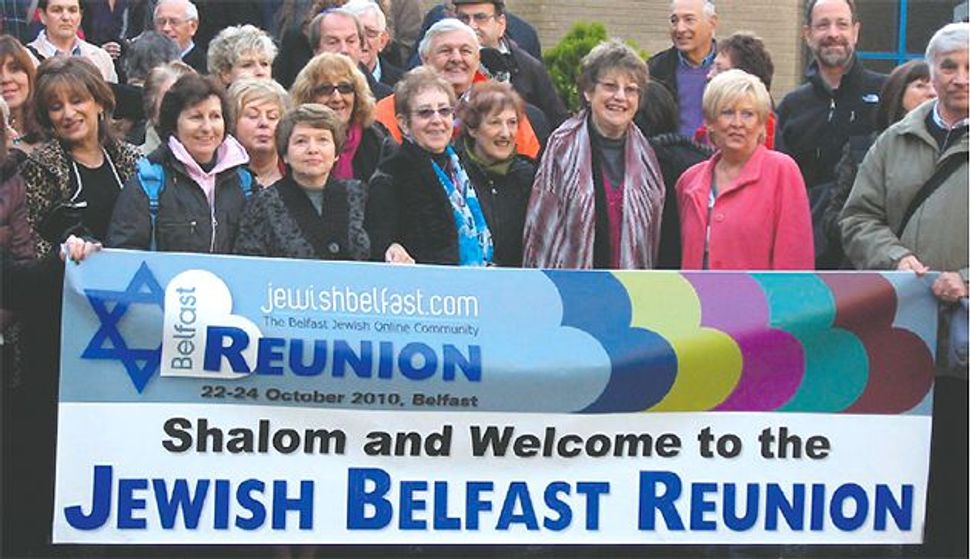 ?Anything Is Possible?: A reunion of Jews who once lived in Belfast is one of several activities aimed at resurrecting the city?s Jewish community, which has declined to 80 members from 2,000. Image by courtesy of Jewishbelfast .com

When the Belfast Hebrew Congregation commissioned its new synagogue in 1964, it chose a circular building held up by concrete beams marked out in the shape of a Star of David. Tall, narrow windows and triangular peepholes allowed shafts of lights to penetrate the space.

Today, a thin wall cuts across the center of the synagogue, slicing the Star of David into two parts. As the city’s Jewish population declined to 80, down from a peak of 2,000 in the 1940s, the synagogue’s committee decided that the space had become too large for the dwindling congregation, so it separated the building into a smaller worship space and a community area for more informal gatherings.

Presently only half of this aging community is observant, and with 11 or 12 men attending prayer services regularly, it has come dangerously close to losing its minyan.

“Apathy has set in,” said Norma Simon, stalwart of the community and columnist for the Belfast Jewish Record, the region’s only Jewish publication. “If the weather is bad or there’s some other reason, [the men] don’t turn up. It is very disheartening when there are only nine.” This may be the end for the Belfast Jews.

“I am saddened,” said Michael Black, chairman of Belfast’s Jewish community, “that my generation will, likely, be the last that can offer a Jewish way of life in Belfast, but I am very proud that, although our numbers were small, we will have played our part in making Northern Ireland a better society for all.”

Belfast’s Jewish community has a rich history. From the impressive synagogue to the notoriously sinkable Titanic — constructed by the biggest shipyard in the world at the turn of the 20th century — its influence is evidenced in all quarters of the city. The city was even the birthplace of Israel’s sixth president, Chaim Herzog, who immigrated to Palestine in 1935 at age 17.

The first Jews arrived in Belfast around 1840, when Richardson & Auden, local linen suppliers, invited Daniel Joseph Jaffe, a German merchant, to come to Belfast and set up an export business, delivering locally sourced linen across the globe.

Following a long period of religious persecution in the mid-19th century, a second wave of Russian Jews made its way to this capital city in the 1880s.

The community’s peak came just after World War II, when the Jewish population numbered about 2,000. Though not a large number, they succeeded in making a mark on the city’s business, commercial and artistic landscapes. Jewish-owned businesses popped up along York Street in the city center. Mostly they were involved in furniture, clothes and jewelry.

With the growing community came kosher restaurants — Nemtzov’s and Diamond’s butchers shops provided meat, and Levey’s kosher grocery provided rye bread and fresh herring flown in from Glasgow — and the establishment of the Jaffe School for the Jewish Children of Belfast, founded by Otto Jaffe, the first and only Jewish lord mayor of Belfast.

It was during the start of the “Troubles” — a 40-year violent political conflict between Northern Ireland’s Unionist and Republican contingents in the late 1960s — that Belfast’s Jewish community first began to lose its numbers. But the primary turning points, Simon said, came in the ’70s and ’80s, when attacks were made on key Jews. The 1977 shooting of local business mogul Leonard Steinberg, though purely economic, made the community uneasy. Steinberg survived, and when he relocated to Manchester, England, much of the community followed.

The unease deepened in 1980 when Steinberg’s friend, local antiques dealer Leonard Kaitcer, was kidnapped for ransom and then murdered. Gillian Price, who relocated to Manchester with three other families, said that at that point, “a lot of Jewish families, especially those with children, decided they didn’t want to live there anymore.”

Eventually, Belfast’s kosher butcher and Hebrew school shuttered. Since giving their children a Jewish education was a top priority for members of the Orthodox community, many of them moved away.

Today, the declining population is affecting all facets of Belfast’s Jewish community. “Children go away for university now, and they don’t come back,” Simon said. The Belfast Jewish Record once produced 10 issues per year; now it produces three. Its December issue documented the Jewish Belfast reunion that took place in November. More than 125 ex-Belfasters traveled from across the globe to reunite with friends and relatives. “We finished up with a very emotional rendition of ‘Hatikvah,’ and with hearts bursting with pride in our heritage, we said farewell,” columnists Joy Brown and Barbara Abraham-Vazana wrote.

While the majority of the community seems resigned to the continued diminishment of its numbers, some are intent on not allowing the marks of Jewish culture to fade. Katy Radford, who recently won an MBE, or an Order of the British Empire — an honor bestowed by the queen — for her service to community relations in Northern Ireland, received for the second year in a row a grant from the European Union to exhibit and promote Jewish arts and culture in the region. Events in 2011 will include a jazz work based on the book “The Chronicles of Narnia,” by local composer and drummer David Lyttle and Israeli pianist prodigy Ariel Lanyi, and an exhibition of a series of cartoons on the Middle East conflict, by several Pulitzer Prize-winning artists. “I think in a community that is getting smaller… and where there are challenges to how the most observant are able to live, it was important to me that the contribution made by Jews in Ireland was allowed to be celebrated,” Radford said.

Rabbi Menachem Brackman, leader of the Belfast Synagogue, also refuses to think in terms of the end. He’s fundraising for a new mikveh — the old one was lost in a real estate transaction in the 1980s — in hopes of attracting more Jews to the area, and he continues to strive to convince those Belfast Jews that have turned away from their faith to reassess. “Anything is possible,” he said. “People have predicted the demise of Jewish communities all over the world, and people have been wrong. Jews are unpredictable.”

Katherine Clarke is a journalist from Northern Ireland who is based in New York City. Her work also has appeared in The New York Observer and The Wall Street Journal.