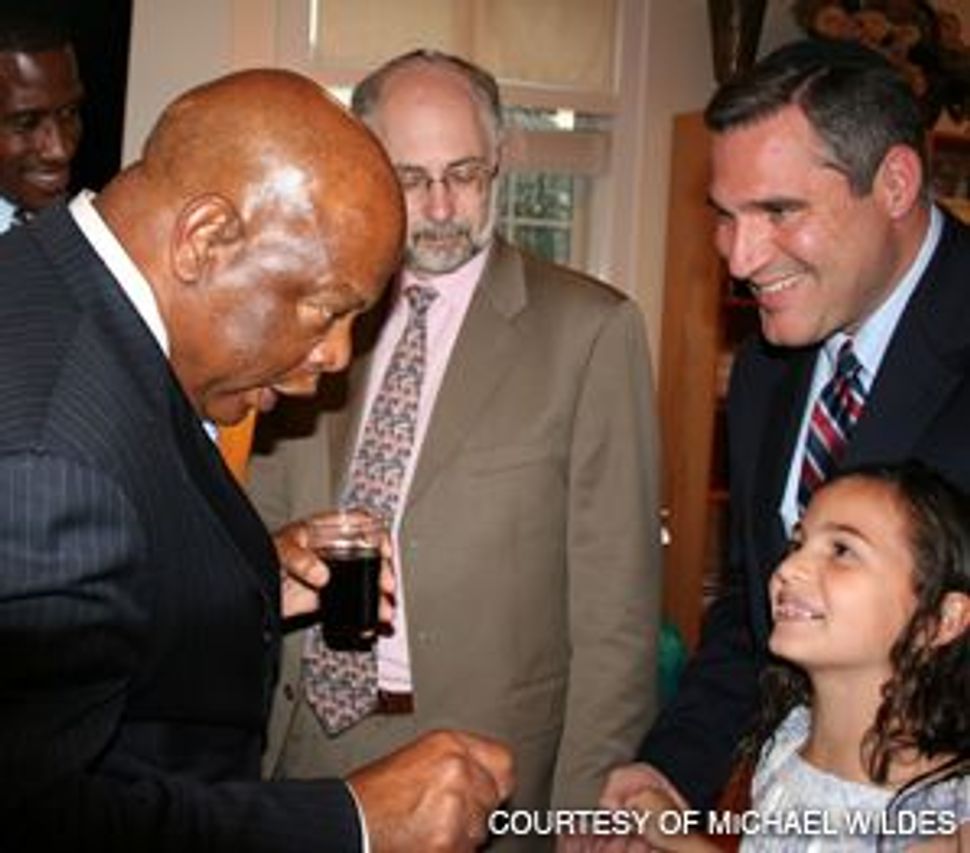 MARCHING ON: Georgia Rep. John Lewis spoke with the Orthodox mayor of Englewood, N.J., Michael Wildes, right, and his daughter.

On June 29, Brooklyn showed that New Hampshire is not the only place for unity these days. 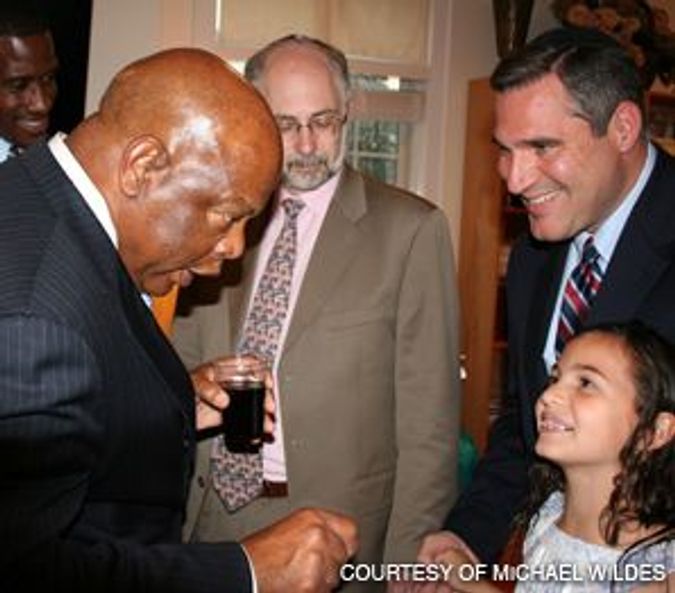 MARCHING ON: Georgia Rep. John Lewis spoke with the Orthodox mayor of Englewood, N.J., Michael Wildes, right, and his daughter.

Coming fast on the heels of Barack Obama and Hillary Clinton’s show of Democratic Party solidarity in Unity, N.H., dozens of Orthodox Jews joined elected officials from both the Jewish and African-American communities on the final Sunday in June for a “unity event,” held in a packed single-family home in Brooklyn’s Midwood neighborhood. On hand was civil rights legend Rep. John Lewis of Georgia, who appealed to the crowd not to allow nerves frayed by the current presidential campaign to translate into greater estrangement between blacks and Jews.

“During this election year there are going to be attempts to divide us,” Lewis said in a speech that focused less on the present than on the past — particularly the heady days of the 1960s, when black and Jewish civil rights leaders marched arm in arm, and students from the two communities worked, and died, together in the fight to register Southern black voters.

“We must not be divided,” he exhorted. “We must keep our eyes on the prize.”

Lewis’s speech in Brooklyn, along with a later appearance the same day before a pro-Israel group in New Jersey, followed months of speculation over the level of support that Senator Obama, the country’s first black presidential nominee, will receive from Jewish voters. Lewis, meanwhile, is facing his first primary challenge in eight years, due in part to his decision to initially support Clinton over Obama in the Democratic primary.

Both meet-and-greets spoke to the continued importance of political ties between the two communities, even as they also highlighted some of the dynamics that continue to challenge black-Jewish ties in 2008.

Indeed, in some ways Lewis’s own recent experience reflects the uneven territory: Seemingly at home in front of audiences of Jewish activists, Lewis nevertheless now finds himself keeping one of his Jewish friends, Rep. Steve Cohen of Tennessee, at arm’s length as he works to recover from the Clinton imbroglio. A freshman lawmaker in a majority-black Memphis district, Cohen has seen his race and religion become sticking points in the course of his reelection bid. He appealed for Lewis to endorse him over his African-American primary challengers, but Lewis balked, sidestepping a second potential entanglement over dicey racial politics. Ironically, the congressman now finds himself asking Jewish supporters both in his Atlanta district and across the country to do what he couldn’t: Support a friend on the other side of the black-Jewish divide.

In Brooklyn, at the unity meeting spearheaded by Democratic State Assemblyman Dov Hikind — an Orthodox Jew whose Boro Park district includes the largest Hasidic bloc in the United States — some of the Jewish attendees spoke of their own continued barriers to supporting Senator Obama for president.

Speaking to the Forward after Lewis had addressed the crowd, Hikind said he remained concerned about Obama’s potential policies in the Middle East and his 20-year relationship with his former pastor, Reverend Jeremiah Wright Jr. The assemblyman said he was preparing to meet with staffers at the presidential campaign of Republican Senator John McCain in early July, even though he would still consider endorsing either candidate.

One member of the audience at the Brooklyn event, Orthodox Jew Alexander Rapaport, said it was his lingering concerns about Obama’s potential strategy in the Middle East that had him contemplating voting for a Republican for the first time in his life.

“I can’t say it’s going to be an easy vote this time,” he said. “If it’s ever going to go to a Republican, it’s going to someone like John McCain.”

Later that evening, at a more intimate gathering hosted by the pro-Israel political action committee Norpac in Englewood, N.J., Lewis once again emphasized the shared history and values of the black and Jewish communities as he recounted details of his life story and remembered some of the Jewish students with whom he worked closely during the 1960s.

Lewis’s message of unity — summed up at one point with the observation that blacks and Jews “came to this land in different ships, but we’re all in the same boat” — was clearly embraced by the audience of roughly two dozen, which was divided between members of Norpac and members of the local African American community. Still, when it came time for the question-and-answer session and the conversation turned toward Israel, it seemed hard not to notice that the two constituencies were not exactly on the same page.

After leaders from Norpac, who are raising money to help Lewis fend off his primary challenge, had finished asking the congressman to speak about the overall prospects for peace in the Middle East and how to counter the nuclear threat of Iran, the final question of the evening came from Malcolm McCormick, an African-American member of the audience who asked what “the next president should do” in order to manage the various conflicts in the Middle East in a way that does not look “so one-sided towards Israel.”

It was a question that prompted Lewis to meditate on the smallness of the world and the need to bring together “the best minds,” Republican or Democrat, to work for peace, even before the next president takes office. Meanwhile, Ben Chouake, president of Norpac and the child of Holocaust survivors, seemed to be working hard to restrain himself.

“Where is the middle ground when one side says it wants peace and the other side says you don’t have the right to live?” Chouake added after Lewis had wrapped up his answer to the question. “I think as a country — and I know the congressman agrees, because this is his life — you have to teach people, and compel them, and even, if necessary, force them to stop incitement, to stop hatred, to stop the racial hatred that is so prevalent and causing the root of the problem.”