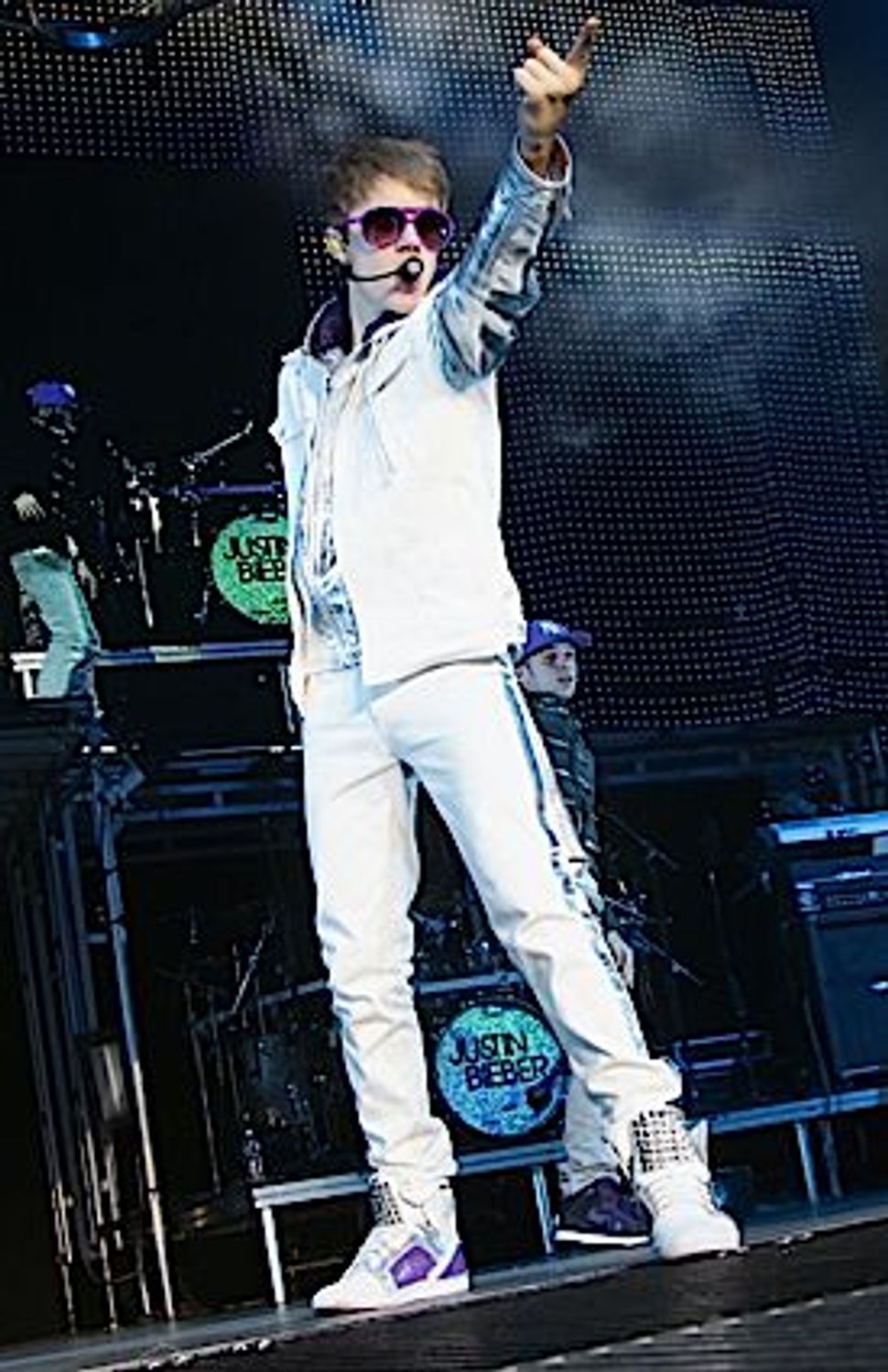 Tel Aviv became Teen Aviv last night, as most of the adult population took cover and girls from across the country headed for Hayarkon Park to see Canadian heartthrob Justin Bieber.

The 17-year-old sensation sang and danced for an hour-and-a-half as his fans sang along and screamed. They hung on his every word, jumping, chanting, and closing their eyes when he asked. He wowed them with his favourites like “Eenie Meeni” and “Never Say Never” – and with his charm, telling the crowd “I would do anything to see you smile.” 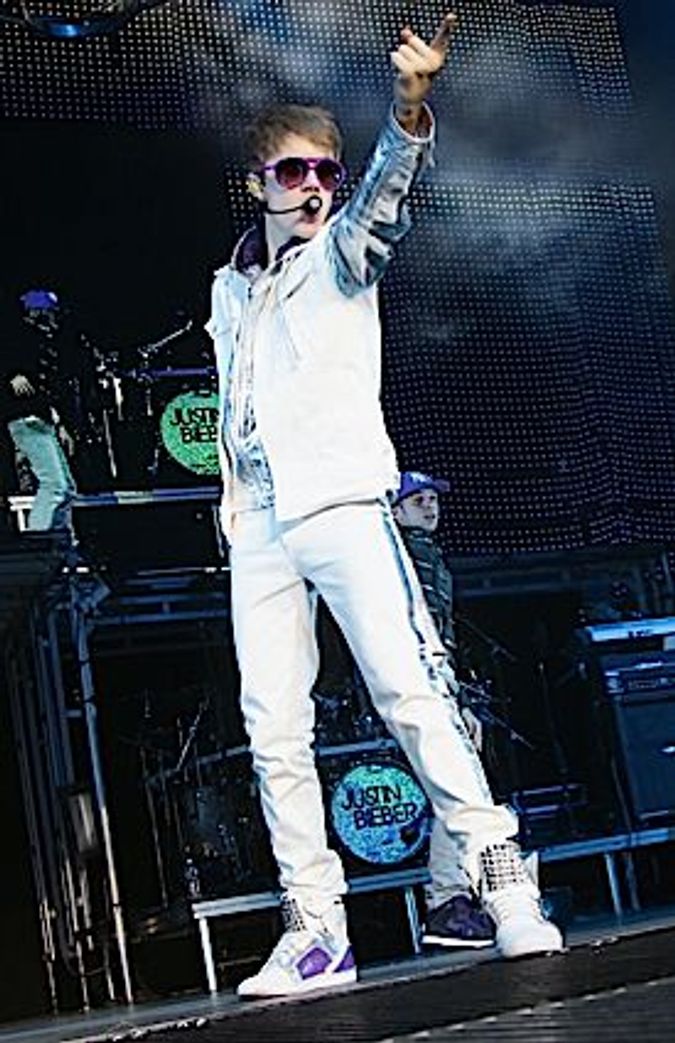 Parent-child roles were reversed, as it was the moms and dads who stood texting on their cell phones because of boredom. They were the ones asking the children how long before they could go home.

“I only agreed to come to get out of the Passover cleaning,” admitted Jerusalemite Itai Erdiv, 38, who took his 12-year-old daughter Devora as he headed for the refreshment stand. To his disappointment, where the beer pumps usually stand, there were toffee apples and cotton candy.

“My wife convinced me to come by saying that our daughter learns all her English from him, and I believe her,” said Michael Levi of Rishon Le-Zion, who was there with 13-year-old Daniela. “But I don’t understand what everyone sees in him as a singer.”

But for the 12 to 16-year old girls, who accounted for most of the 21,000-strong audience, it was a perfect night. “All the grown ups like to knock Justin, but where are their pop stars? Where is that Elvis Costello?” asked 15-year-old Tel Avivian Orly Menit. Costello, 56, cancelled his concert last year because of his views on the Israeli-Palestinian conflict.

Except for one word of Hebrew – “sababa” which means great – and a remark that it was apt to play his song “Pray” in the Hold Land, he didn’t make any reference to Israel. But he did give the strangest of tributes to Holocaust survival. “This is Scooter’s grandma – she’s a Holocaust survivor,” he said as he strode over to the Israel grandmother of his manager Scooter Braun. He then serenaded her with a song about his first love at age 13, jumping up and down singing “baby, baby, baby, oh.”

Perhaps there would have been more chat about his location had his plan to tour the country worked out. “I want to see this country and all the places I’ve dreamed of and whether it’s the paps or being pulled into politics its been frustrating,” he commented via his Twitter account on Tuesday, a day in to his trip. A few hours earlier he posted: “Staying in the hotel for the rest of the week u happy?”

His tweets related to being followed by the paparazzi, including at the Church of the Holy Sepulchre in Jerusalem, and unconfirmed press reports that he had refused to meet with Prime Minister Benjamin Netanyahu when he learned that youngsters from Sderot and other areas under fire from Gaza were due to attend.

But while Netanyahu reportedly failed to get kids from the so-called Gaza envelope a dose of Bieber fever, three Jewish American charities managed it.

A few days before the concert, Nir Kouris, a 28-year-old social media entrepreneur from Tel Aviv, decided he would arrange to treat children living within range of rockets fired by Palestinian militants from Gaza to the concert in consideration of the long periods they have spent in bomb shelters lately.

Kouris took 700 children, providing tickets, transport and chaperones, with help and funding from the Washington-based Morningstar Foundation, the ROI Community of young Jewish leaders, and the Israel arm of the Tulsa-based Charles and Lynn Schusterman Family Foundation, Kouris had done some media strategy work ahead of the event for the concert promoters, and used his contacts to negotiate a discount on tickets.

Shoval David, 14, was in her bomb shelter when she received a text message from the municipal community center in Sderot asking her if she wanted to go. “I couldn’t believe it – I was so excited,” she recalled as Bieber made his way on to the stage. “After all the time in the shelter it’s great to be here doing something normal,” she said.

The community center’s youth coordinator Ruth Ben-Abu said that youngsters in Sderot have very limited horizons. The rocket attacks are just the immediate problem, she said. After years of living under threat from Gaza rockets, Sderot residents who can afford to leave have moved out. Those who remain have few venues for entertainment locally, and most youngsters have very limited financial means, explained Ben-Abu. “Because of this, just coming to Tel Aviv is something they rarely do, and going to big concerts like this just isn’t part of their lives.”

As 12-year-old Oren Bucanim danced to the music, she commented that the songs have become the soundtrack to her shelter sessions. “We have a computer in the bomb shelter, so I go on Facebook and listen to his music – so to see him in person is just amazing,” she said.

Maayan Froum, 12, had been offended by Bieber’s failure to meet with youngsters from her region — nevertheless by the end of the concert all was forgiven. “So he doesn’t want to get in to ‘politics’ — this makes me angry because it’s not ‘politics’ it’s our lives, the reality we live with every day. But the show was fantastic and I still love him.”