House Newcomer Defies GOP Leaders on Israel, From the Right 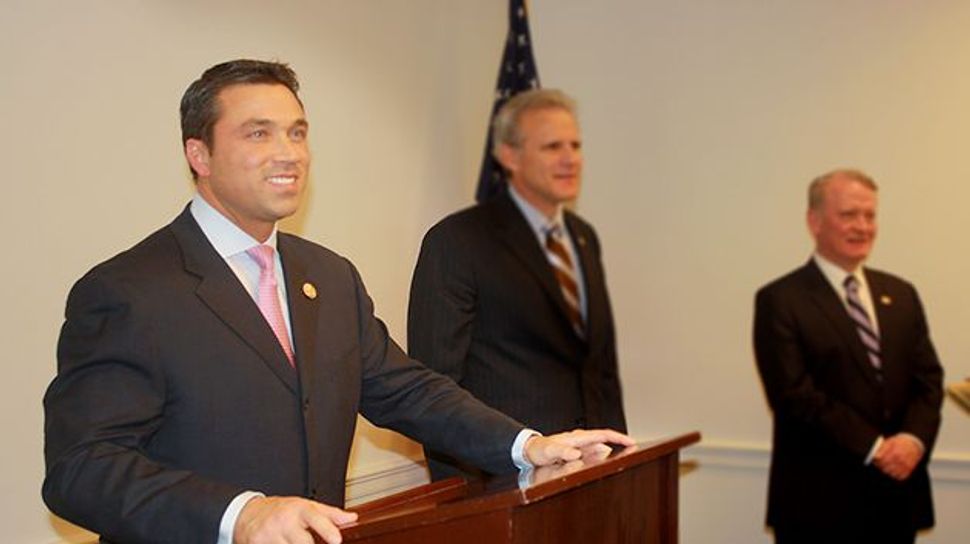 For those who know him, it was no surprise when freshman Rep. Michael Grimm broke ranks with his party and became the first House Republican to call for the release of Jonathan Pollard.

The freshman member from New York has made Israel a key element of his political work. And while the Republican House leadership has thus far refrained from speaking out in favor of a commutation of Pollard’s life sentence for spying for Israel, Grimm pays small heed to political consensus.

Grimm also came out against his own budget-cutting camp when talk of slashing aid to Israel was on the table. And he strongly opposes a two-state solution for the Israeli-Palestinian conflict. Two states is the position adopted by President George W. Bush during his administration and by party leaders today.

Grimm is not Jewish. But his hawkish views on Israel seem to square with Jewish constituents, especially among the Orthodox community, in his congressional district, which includes Staten Island and parts of Brooklyn. They are in line, too, with Jewish donors from outside that have helped him get elected.

Grimm, 41, currently serves as co-chairman of the House Republican Israel Caucus and has positioned himself as the right-wing marker on all things relating to what he refers to as “our sister state.”

“I think a two-state solution is the end of Israel as we know it. I think it is not even an option, it’s a nonstarter,” Grimm said in an April 14 interview at his Capitol Hill office. His message to Israeli Prime Minister Benjamin Netanyahu, who is scheduled to speak to Congress in May, is to “stay strong” and avoid concessions. When asked what Palestinians can expect if a two-state solution is off the table, Grimm suggested that they come to negotiations with no preconditions.

Support for a two-state solution has been the policy of all presidents since Bill Clinton. It was also adopted by Netanyahu in 2009, shortly after he took office.

Grimm, who has become a frequent guest in panel discussions and events dealing with Israel, often accuses the Obama administration of damaging relations with Israel and of not showing sufficient support for the Jewish state.

But when it comes to Israel, Grimm is willing to take on not only Democrats, but also his own party and its strong Tea Party bloc. Grimm, who describes himself as an “extreme fiscal conservative,” threatened not to support a Republican Continuing Resolution on spending if it included cuts in aid to Israel. “Reducing security assistance to one of our most important allies in the name of fiscal responsibility is not fiscally responsible,” Grimm wrote in a February 11 letter to Republican majority leader Eric Cantor.

Cantor and other House GOP leaders shared his view on that issue. But when it came to Pollard, Grimm stood alone.

Advocates for the release of Pollard, who was sentenced to life imprisonment in 1987, have been working tirelessly to garner support from key political figures from both parties. Dozens of Democrats joined the call, and several former officials from previous Republican administrations have added their voice in recent months. But current GOP lawmakers have been hard to convince.

An activist speaking on condition of anonymity said that all Republican congressmen he had approached had refused to sign on because they felt that support for Pollard’s release could portray them as being soft on crime and as being at odds with the defense establishment.

Grimm, who had been supportive of Pollard’s release even before taking office, ignored these concerns. He visited Pollard on March 13 at the Butner Federal Correctional Complex in North Carolina, and then issued a video statement calling for Pollard’s release.

In his interview with the Forward, Grimm stressed his credentials as a former Marine and former FBI agent. Pollard’s life sentence is “disproportionate; it’s not fair, it’s not justice,” he said. For the crimes he committed, Grimm said, a jail term of 10 to 15 years would have been sufficient.

As a Marine, Grimm fought in the first Gulf War. Later, as an FBI agent, he worked undercover, infiltrating Wall Street firms in an operation that led to a major crackdown on white-collar criminals. It was this job that earned Grimm the nickname “Mikey Suits” for his elegant pinstripe outfits, a style he still maintains in Congress.

This is not the only aspect of his previous life as a law enforcement officer that Grimm brought to Congress. After the attack on Arizona Rep. Gabrielle Giffords, Grimm suggested that lawmakers be allowed to carry guns for self-protection. He also argued against attempts to increase gun control.

But the tough-guy image is easily disarmed upon entering Grimm’s office, thanks to his new roommate — Sebastian, a 3-month-old, tiny Yorkshire terrier puppy. Grimm adopted Sebastian several weeks ago after the dog had been rescued from a puppy mill. Ever since, Sebastian has been living in the office, where his dog bowl sits next to the congressman’s couch. Staffers walk him during the day, and the dog goes home with the congressman at the end of the day.

During his electoral campaign, Grimm drew significant support from Jewish donors living outside the district — so much so that, in July 2009, the press office of incumbent Democrat Mike McMahon circulated a list of Grimm donors under the heading, “Grimm Jewish Money Q2.”

The press officer who distributed the list was quickly fired, and McMahon apologized for the list’s distribution.

Some of Grimm’s Jewish support, particularly during the early months of the campaign, came from the supporters of Rabbi Yoshiyahu Yosef Pinto, a Sephardic kabbalist with deep ties among Israel’s political and business elite and with growing influence in the United States. Last June, Grimm sat beside Pinto at the front of the sanctuary in his Manhattan yeshiva while the rabbi delivered a lecture.

“It was more of a spiritual experience, it was not campaign strategy,” Grimm said, explaining that Pinto helped him find his way back to faith after the death of his father, which caused him to question God and to stop attending church.

House Newcomer Defies GOP Leaders on Israel, From the Right