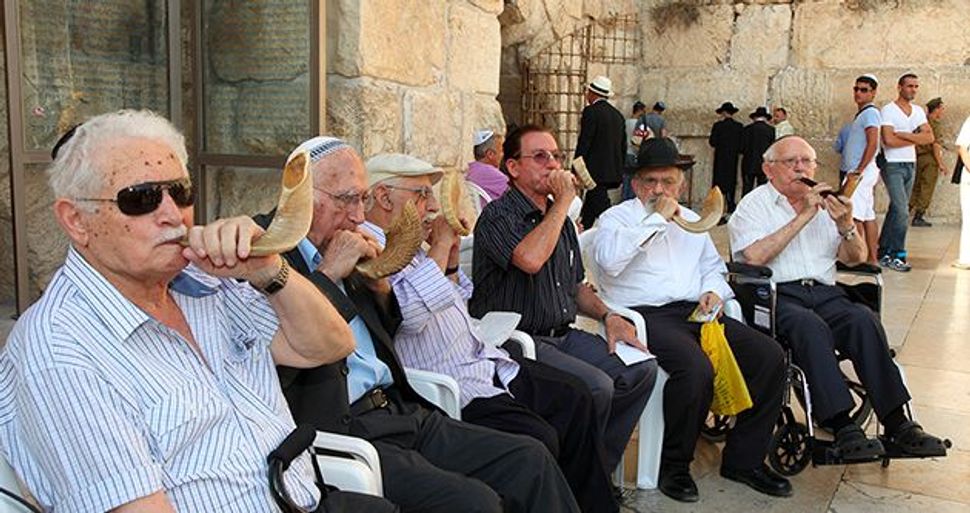 Eyewitnesses: Toldot Yisrael?s video ?Echoes of a Shofar? chronicles the men who blew contraband shofarot at the Western Wall during the British Mandate. The six living shofar blowers recently returned there to blow in unison. Image by Sasson Tiram

It was November 29, 1947, and the United Nations was about to vote on the resolution that paved the way for the establishment of the State of Israel. The story is well known: The Zionists achieved the necessary two-thirds majority by the skin of their teeth. But some details are still emerging.

Recently Suzy Eban, widow of Abba Eban, the Jewish Agency for Israel’s representative at the United Nations at the time of the vote, agreed to an interview with Toldot Yisrael (Hebrew for “the chronicles of Israel”), a not-for-profit organization dedicated to recording the memories of people who lived through the founding of the State of Israel. She recounted how the road to statehood ran through an unlikely location.

Sitting in her Herzliya home, she said that a delegate of one South American country — she wouldn’t reveal which — disappeared shortly before the vote. A Jewish Agency official “went to the men’s room, and he recognized the man’s shoes under the door, and he knocked and said: ‘You promised to vote. They’re voting now. I’m here to bring you to the vote.’” The delegate in question obliged and voted in the Zionists’ favor.

This is just one of hundreds of snippets of history captured by videographers from Toldot Yisrael.

The idea for the project sprouted in 1994, when Steven Spielberg established the Survivors of the Shoah Visual History Foundation to record the memories of Holocaust survivors. At that time, Eric Weisberg, who had just graduated with a degree in history from Yeshiva University, was inspired to do something similar for the State of Israel’s founding generation. In 2002, the Ohio native made aliyah, and in 2007 he gave up his public relations job and set up Toldot Yisrael.

“I felt it’s now or never,” he told the Forward. “At the young end, we’re talking about people who are 80, yet the experiences of these people are so important to Jewish history.

“Our pool of interview candidates has decreased by 50% since we first began the project. Israel’s Jewish population in 1948 on the eve of statehood numbered 630,000.… Today there are less than 60,000. Statistically, one in five interview candidates will not live through the coming year.”

Toldot Yisrael, which is funded mostly by American Jewish foundations, has so far completed 530 interviews, recording more than 2,000 hours of footage available to researchers, media and the general public. It hopes to carry on as long as there are people alive to interview.

The organization has gained significant traction since its founding. In recent months, all three major television networks in Israel have used its footage. It has collaborated with the Israel History Channel to produce 20 short clips of recollections, all of which are now posted on YouTube, and it has also produced two documentaries, which have garnered more than 250,000 views on YouTube.

Weisberg is driven by more than just a desire to preserve historical information, though. A self-confessed “romantic” when it comes to the 1948 era, he said, “If I could have been born at a different time, the era I would choose is the year of the founding of the state.” A staunch Zionist, he believes that the testimonies are important to increase contemporary Jewry’s appreciation of the sacrifice that went into founding the state.

While Eban and some others focus on the broad story of how Israel came into being, other interviewees simply provide insights of what pre-state Palestine was like: cuisine, clothing trends. One man, Ahuvia Malkin, who was the first announcer on the radio station of the Haganah (the pre-state Jewish militia), can be seen in a clip discussing the high-tech method for transmitting the station’s signature tune: He was to whistle it three times.

Toldot Yisrael’s research also extends beyond Israel, asking Diaspora Jews how they helped Israel toward statehood. One interviewee, renowned Modern Orthodox rabbi Norman Lamm, chancellor of Yeshiva University, spoke of his experience in the 1940s as a chemistry student at the New York school. Lamm recalled telephoning an American-based Jewish Agency representative and asking if he could be of any use. “In the middle of my talk, he says, ‘Shut up and come over here immediately,’” Lamm recalled. So, I did just that.… He apologized and said, ‘The reason I was so abrupt was our wires are tapped, and it’s none of the FBI’s business what we’re doing.’” Lamm went on to help the Jewish agency with ammunition development.

Ralph Goldman, 96, honorary executive vice president of the American Jewish Joint Distribution Committee, worked for the Haganah in New York in the late 1940s. Soon after the Jewish state was declared, Goldman became an official in the office of Prime Minister David Ben-Gurion, initially continuing to work from New York and then moving to Israel in 1953. He told the Forward that he sees Toldot Yisrael’s project as being “important in highlighting for Israeli-born people the role of Diaspora Jews in the founding of the state.”

One of Toldot Yisrael’s most popular videos, “Echoes of a Shofar,” is about blowing contraband shofarot at the Western Wall during British Mandate.

Though in 1930, the British banned Jews from blowing the shofar at the Western Wall, each year several smuggled in shofarot and blew them anyway, usually resulting in arrest and imprisonment. Toldot Yisrael tracked down the six living shofar blowers from the time and took them to the Western Wall, where they blew the shofar together.

During an interview, several spoke of their arrest. “As soon as we blew the shofar a commotion started,” said Abraham Elkayam, who blew it in 1947 at age 13. “They started beating people with clubs.” Two of the men demonstrated how they ad-libbed prayers to warn others of British spies who were staking out shofarot. “Be careful, there’s a secret agent, he’s walking among you,” Jacob Sika Aharoni sang in hazanut style, while recalling how he blew his shofar in 1938, at age 16.

But not all the memories of the British are negative, and the clips constitute a fascinating record of the mixed feelings that many in pre-state Palestine related to the British. One clip features Yehuda Avner, 82, who was a student and soldier in 1948 and went on to become a diplomat and prime ministerial adviser, recalling the elation after the United Nations vote. “The British soldier on guard was relieved,” he recalled. “He knew, thank God, there’s going to be an end to all this.”