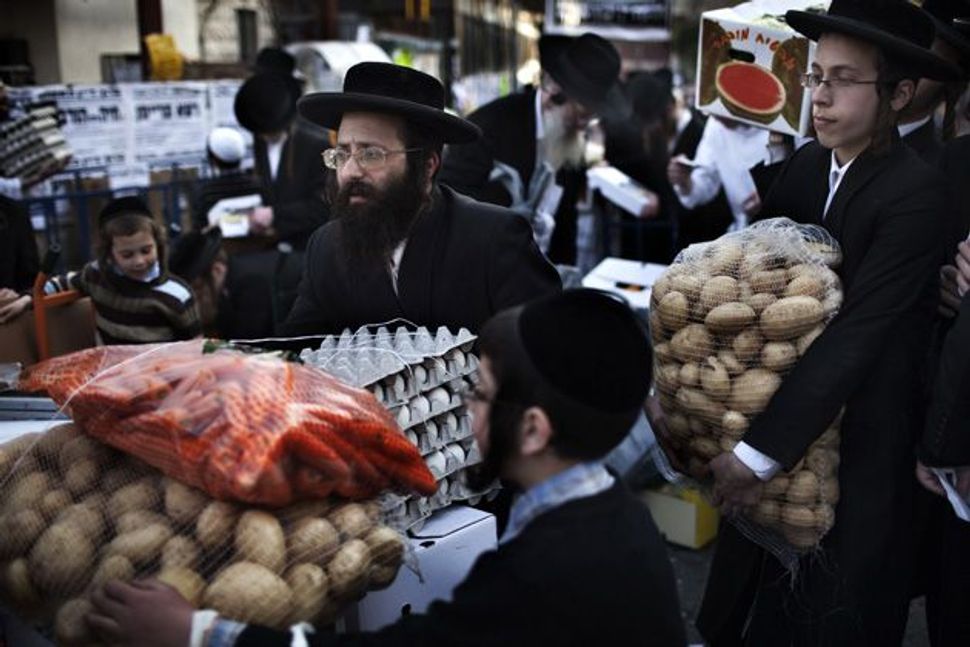 The Face of Poverty: Ultra-Orthodox Jews in Jerusalem carry donated food for the poor from a food distribution center before the Passover holiday, April 13, 2011. About 60% of Israel?s ultra-Orthodox Jews, or Haredim, live in poverty. Image by MENAHEM KAHANA/AFP/Getty Images

When Israel was invited to join the Organization for Economic Cooperation and Development, Prime Minister Benjamin Netanyahu declared it an international “seal of approval.” But a year later, it’s clear that membership in the elite group has brought anything but approval of the country’s direction in one key area: inequality.

Israel’s ascension last May to the OECD — an organization of the world’s most prosperous economies — has shone a spotlight on the economic strengths and weaknesses of the state, as compared with other OECD countries.

Growing by 7.8% last year, the Israeli economy ranked fifth highest in growth among the group’s 34 members. Israel’s growth outstripped that of the United States, Britain, Japan, Germany and France.

“Suddenly you have nonpartisan data saying how we’re doing in terms of poverty, welfare and the like, and people are saying maybe those progressive lunatics were right all along,” said Ono Academic College researcher Amir Paz-Fuchs, one of Israel’s leading scholars on inequality and the former head of the Center for the Rights of the Unemployed.

Even in the government establishment, criticism of the country’s direction is on the rise. Late last year, the government’s National Insurance Institute published its annual Poverty and Social Gaps Report, in which it cited OECD figures indicating an “exacerbation” of inequality in Israel. The report argued: “This means that Israel’s socioeconomic policy is on a course which is not sustainable, and which casts a shadow on the country’s ability to achieve a high standard of living, not only for a handful of people, but for all residents.”

The institute went on to present its figures for 2009, stating that in its analysis, the incidence of poverty among children, reached 36.3%, breaking all previous records. The percentage of people living in poor families according to its criteria — which are slightly different than the OECD’s — increased to a peak of 25% from 23.7%.

It is not only poverty that has come under the microscope as a result of OECD data — so have two of the state’s key vehicles for lifting people out of poverty, namely welfare and education.

Israel spends 16% of its budget on welfare, compared with an average of 21% in the OECD members. “Countries get the poverty rate they are prepared to pay for,” Angel Gurría, OECD secretary-general, said at a roundtable with Israel’s finance minister, Yuval Steinitz, in January. “If Israel is to cut poverty and reduce inequality, it will have to not only shift the composition of social spending, toward more cost-effective benefits, but also increase its investment in this area.”

The first is coping with the effects of sudden change. Though Britain underwent wrenching socio-economic change under Prime Minister Margaret Thatcher in the 1980s, and America did so under Ronald Reagan, change in Israel has been sharper. Until 1985, under the rule of socialist parties, Israel was famed for strong government intervention in the economy, robust social-welfare policies and a highly unionized work force. Responding to poor economic performance and high inflation, the government in that year enacted an Economic Stabilization Plan, which cut public spending, gave the business sector a larger leadership role in the economy and paved the way for further market-oriented structural reforms.

The next year, privatization began, and to date, 90 government entities have been privatized. Reforms came thick and fast from then on, and Netanyahu further accelerated them during his stint as finance minister, from 2003 to 2005. He cut income support by some 30%. Simultaneously, union membership plunged, from 85% of the workforce before 1985, compared to 30% today.

A second Israeli challenge is related to the country’s Arabs and Haredim, two population groups that stand on the margins of society economically but are large demographically. Almost half of all children starting elementary school today belong to these groups.

About half of all Arabs and 60% of Haredim live in poverty, reflecting a 50% growth in poverty in these sectors in a decade, Stanley Fischer, governor of the Bank of Israel, said in March. He cited low participation in the work force of Arab women and Haredi men as major factors.

“If we do not deal with these problems, we will be unable to maintain our standard of living — that of the advanced economies,” Fischer told the Israel Business Conference in Tel Aviv last December.

Experts across the political spectrum agree that the change has given rise to a huge culture gap between the kind of welfare provision that Israelis expect and what they are receiving. But they disagree on what should be done.

Dan Ben-David, executive director of the Taub Center for Social Policy Studies in Israel, told the Forward that the 1985 reforms sparked the growth of Israel’s economy. He said he thought that Netanyahu had “saved the country in 2003 [when] we were on the brink economically.”

In Ben-David’s view, Israeli governments could have kept inequality in check had the process of change gone further, and had the governments done more to alter the nation’s mentality as they changed policy. The government should now boost education spending to increase the ability of weaker groups to compete in the workplace, and should cut benefits to force them into work.

By contrast, Shlomo Swirski, academic director of another policy institute, the Adva Center, said, “What we conclude is that the government should return to the philosophy of 1985 and consider a more active role in welfare and economic development.”

The two men did, however, agree on one thing. “We have two countries in one — one First World and one Third World — all in a country the size of metropolitan Philadelphia. It’s nuts,” Ben-David said.