A Seder That Also Tells The Story Of Labor 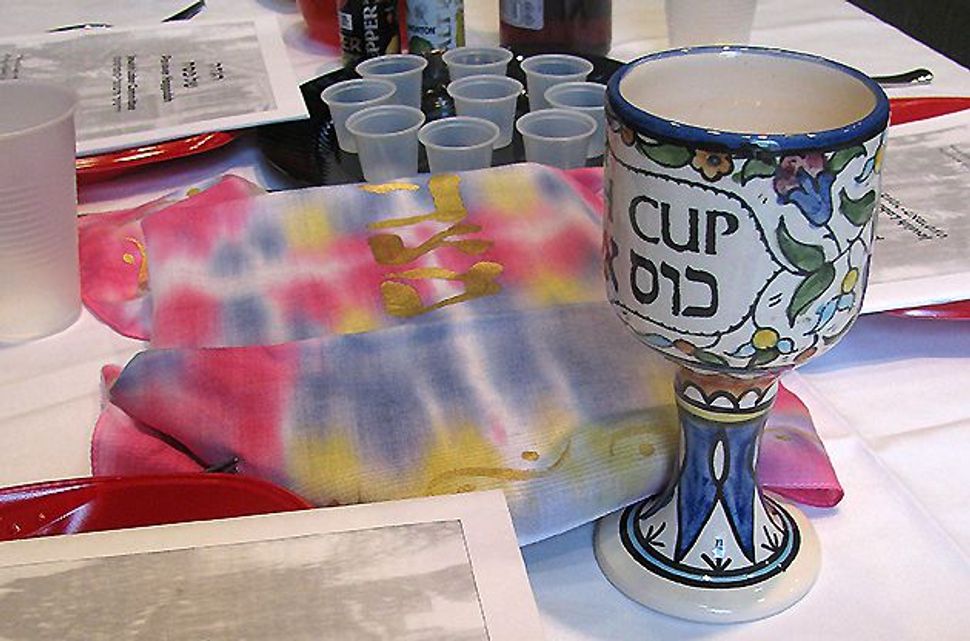 How was the special seventh-night Seder at the University of Wisconsin’s Hillel Foundation different from all other Seders?

Well to start with, the plague of boils became exploding landfills and destroyed wetlands defacing the earth. The plague of locusts, featuring insects traveling in a swarm? The symbol of a state public transportation system pulverized.

Traditionalists might scoff at such adaptations of the Passover meal. But some 30 battle-hardened labor activists and members of the Jewish community took to the changes without blinking as they gathered near ground zero of labor’s battle against government efforts to curb collective bargaining rights.

At the “Labor Seder” held on April 25, the traditional text was rewritten to reflect the past three months of protests against the efforts of Republican Governor Scott Walker to dilute collective bargaining rights for public employees.

“Given [Governor Walker’s] union-busting bill, given the protests and the conflict around it, we thought it was a perfect time to do a Labor Seder,” said participant Chad Goldberg, who teaches sociology at the university. “I understand it had never been done before, and we thought if there was ever a time to do one here, it would be now.”

“The Seder story speaks to people of all faiths and all traditions,” said Mary Bell, president of the 98,000-member Wisconsin Education Association Council. Bell, who was raised Catholic, added, “If we haven’t learned that we must stand together and that the traditions that underlie people of all faiths lead us to the same conclusions, then we aren’t paying attention to the lessons that we’ve just been through.”

The Madison event, sponsored by the Jewish Labor Committee, was one of several Labor Seders held across the country, a new tradition that the JLC has been promoting for the past decade. This year saw Labor Seders in Boston, Newark, N.J., New York, Washington, D.C. and Houston, in addition to Madison.

For Madison, a politically liberal city of about 210,000 built around the University of Wisconsin’s main campus and the State Capitol, using a Passover Haggadah produced by the JLC was not much of a stretch.

Over the past three months, hundreds of thousands of protesters have rallied in and around Madison’s lovely white Capitol building, drawing worldwide attention to an increasingly energized American labor movement. The issues include the right of public employees, including teachers, to bargain for working conditions and benefits.

The Jewish Labor Committee Haggadah, which is in its fourth printing, uses labor imagery to enhance the traditional storytelling of the Jewish flight from Egypt. The locusts depicted as a threat to mass public transportation, for example, came from an adaptation by the family of Rachel Lerman, a UW-Madison student who attended the Seder.

“Think of our transportation system pulverized,” the family warned in its rewrite of the text. “Walker’s plan to cut funding for public transportation and rail while adding money to the state’s highway program increases pollution, places more burdens on the state’s urban communities, and transfers money to Walker’s key campaign contributors — road builders.”

Using the Passover service to highlight such explicitly liberal political viewpoints could be controversial.

But as Eli Fishman, a representative of the Chicago chapter of the JLC, insisted, “There are similar issues of oppression between workers today and the Israelites in Egypt.”

Fishman rejected the suggestion that his group’s presentation politicized a religious event.

“There’s a separation of church and state,” Fishman said. “As a religious community, we are not allowed to talk about politics in terms of politicians and issues. We are allowed to talk about worker rights and social justice and more universal issues. We’re not going to have any discussions here about a given governor or legislator.”

Of course, this was before Rachel Lerman discussed exactly that in her presentation of the Ten Plagues.

Michael Perry, director of education and employee involvement at AFSCME Council 31 in Chicago, defended Lerman’s approach, saying that Walker’s treatment of workers should be a part of the Seder discussion. “There’s enormous respect for worker rights in Judaism,” said Perry, who helped write the JLC Haggadah. “Talmudic rabbis were day laborers, so they were very sensitive to worker rights issues. That’s why we made the connections.”

A Seder That Also Tells The Story Of Labor