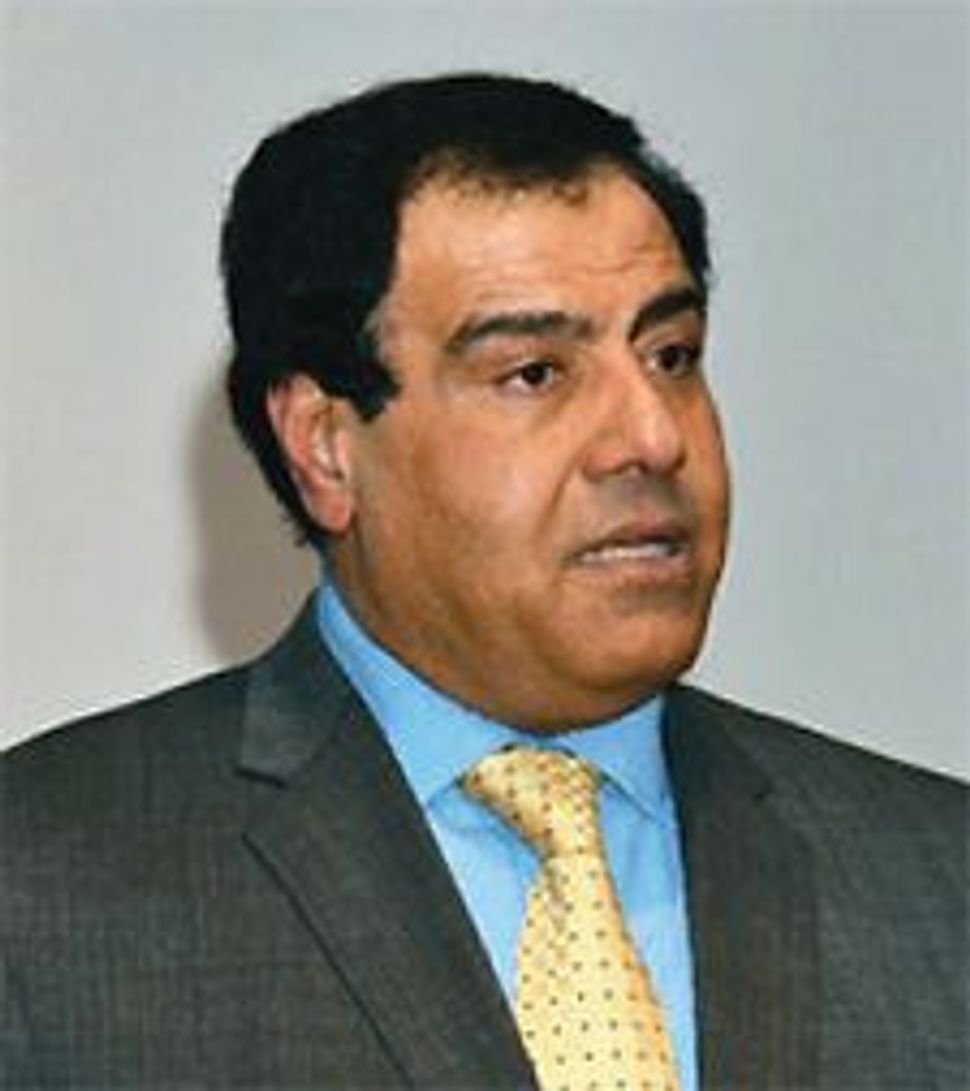 Seeing Both Sides: Abuelaish speaks about his new memoir during a 21-city book tour of the United States. Image by BOB WESSMAN

Izzeldin Abuelaish, the Gazan doctor who lost four members of his family when an Israeli rocket destroyed his house during Operation Cast Lead, used a medical analogy to warn against hating those who cause us great harm. 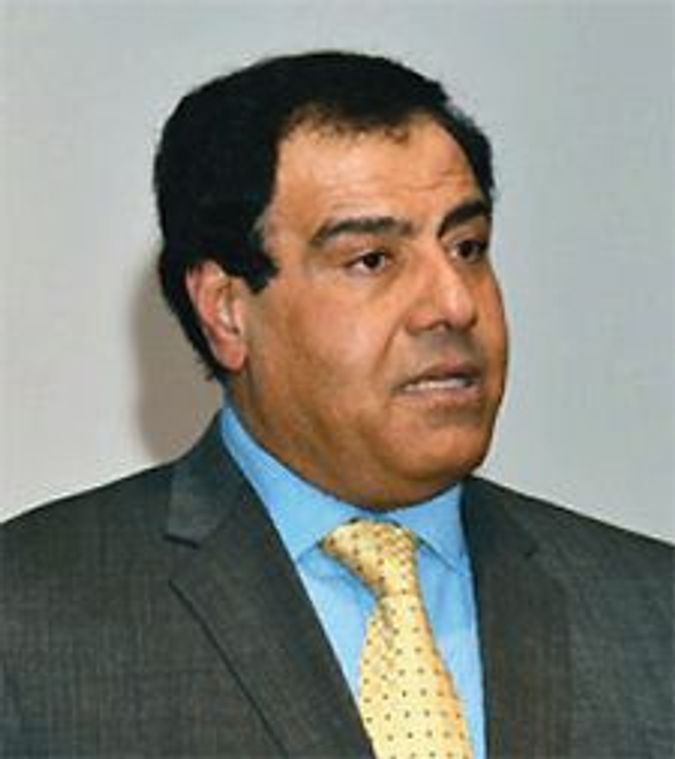 Seeing Both Sides: Abuelaish speaks about his new memoir during a 21-city book tour of the United States. Image by BOB WESSMAN

“Hatred is a chronic disease,” Abuelaish told a group of 60 people who had gathered at Central Connecticut State University to hear him speak about the tragedy and his new memoir, “I Shall Not Hate.”

Abuelaish acknowledged that he was angry about what happened, and tears streamed down his face as he talked about the deaths of three of his daughters and a niece, who were killed in the shelling that destroyed his house in January 2009. But, he said, he had decided not to let his anger turn into hatred.

“We will be drowning in an ocean of hatred if we hate everyone who wrongs us,” he said.

During his recent 21-city book tour of the United States, Abuelaish repeatedly called for nonviolent solutions to the conflict between Israel and the Palestinians. He said he supported a two-state solution, which he believes can be achieved only if both sides negotiate from a position of true equality and mutual respect. On April 25, Abuelaish was in New York for an informal conversation with members of the International Peace Institute.

The 56-year-old widower grew up in a Gazan refugee camp and is the first Palestinian doctor to complete a formal residency in an Israeli hospital. The obstetrician/gynecologist specializes in fertility treatments.

Six months after the attack, in July 2009, he left Gaza with his five surviving children and moved to Toronto, where he is an associate professor at the University of Toronto’s Dalla Lana School of Public Health. A devout Muslim, Abuelaish believes that God spared his life so that he could deliver his message of peace. He had begun working on a book in 2005 about his journey to his medical residency in Israel from a refugee camp, but he changed course and wrote the new memoir.

“But everything has a time, according to God’s plan,” he said. “The time to write the book was after my daughters were killed.”

The world first heard of the family’s tragedy in dramatic fashion. Long involved in medical work in both Gaza and Israel, he called a journalist-acquaintance, Shlomi Eldar, who was broadcasting live on Israeli television, to tell him that the Israel Defense Forces had just attacked his home. In real time, viewers heard his raw grief over the loss of his daughters, 21-year-old Bessan, 15-year-old Mayar and 14-year-old Aya. As reported in the book, Abuelaish said: “Oh, God, they killed my daughters. Shlomi, I wanted to save them, but they are dead. They were hit in the head. They died on the spot. Allah, what have we done to them?”

Abuelaish told the crowd at the college in New Britain, Conn., on March 15 that he does not blame all Israelis, or even the individual Israeli soldiers who fired the shells that killed the girls. Instead, he blames a system in desperate need of healing.

“I hope you will carry with you an appreciation of the relentless absurdity of a system that does not allow humans to be humans,” he said.

Abuelaish received a standing ovation from the audience. Graduate student Mustafa Ahmad Chavis, 58, said he was “flabbergasted” by Abuelaish’s talk. “A normal reaction to what happened to his daughters would have been rage, but he managed to show amazing restraint,” said Chavis, who has a Jewish mother and is a convert to Islam.

Daniel Piper, 28, an editorial assistant who volunteers for an organization that advocates military withdrawal from Iraq and Afghanistan and cutting all assistance to Israel, said he believed the Palestinians are under assault from the United States and Israel, but that “Dr. Abuelaish was very generous in his judgment of both nations.”

During his book tour, Abuelaish spoke to several Jewish groups, mostly Reform congregations, including the Bellevue, Wash., synagogue Temple B’nai Torah. “I introduced him to our congregation on Martin Luther King Day, and maybe someday there will be a day to honor Dr. Abuelaish in his community,” Rabbi James Mirel of the synagogue said in a phone interview. He said that 200 people showed up for Abuelaish’s talk, and Mirel estimated that a quarter of them were Muslim.

The last stop on the book tour was at the University of Southern Maine, in Portland, where Abuelaish delivered a speech to an overflow audience of 600 people on March 31.

Many mainstream Christian groups, as well as Amnesty International, distributed pro-Palestinian literature in a reception area, where a table was laden with Middle Eastern food. The Al Hahn quartet performed Arabic melodies. An exhibit of pictures drawn by Gazan children during Operation Cast Lead depicted planes and missiles attacking from the sky, Israeli tanks everywhere and buildings on fire.

In his speech, Abuelaish urged that “we build bridges to each other, not walls that separate us.” He made a plea for people to get more involved in the quest for peace. “Our enemy is our ignorance,” he said.

A woman who identified herself as a daughter of a Holocaust survivor said she was deeply disturbed by the Gazan children’s pictures and that she wondered how to be both pro-Palestinian and pro-Israeli.

“There are two sides to a coin,” Abuelaish responded. “The eyes must be opened on both sides. The occupied-occupier relationship must end. Israelis and Palestinians must look at one another eye to eye, not up and down.”

“As a Jew, I can no longer think of myself as a victim,” said Abraham Peck, 64, the son of Holocaust survivors. “But I certainly don’t want to act as an oppressor.” He added that “we need to stand up for what is right. Violence is not the answer.” Peck teaches Holocaust studies at the University of Maine at Augusta.

Maine Voices for Palestinian Rights sponsored Abuelaish’s Portland visit. The organization’s chairman, Robert Schaible, 67, said: “We want more people to see the Palestinian side… they are not evil people. They are people like us.”

Abuelaish often ends his talks on the book tour with the poem “Where Love Resides,” written by Anael Harpaz, an Israeli woman who knew Abuelaish’s eldest daughter.

One stanza, from the middle of the poem, reads: “Bessan, forgive me for not being able to save you from my own people. Forgive me for giving you hope that peace is possible and then taking that dream from you.”