An Aunt’s Legacy Is Erased in Maine 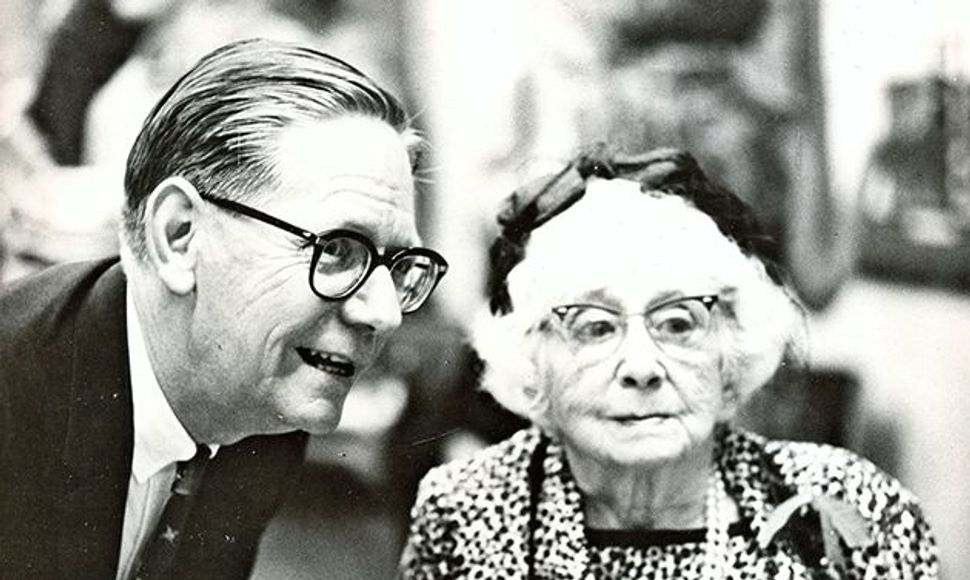 Forgotten Hero: Rose Schneiderman (right) was one of the figures in the mural. Image by COURTESY OF ANNIE VALLIERE

As Annie Schneiderman Valliere drove south from her home in Woolwich, Maine, to the Triangle Shirtwaist Factory Fire’s centennial commemoration in New York City, friends began calling her cell phone with disturbing news: Her aunt, activist Rose Schneiderman, was about to be scrubbed from Maine’s labor history.

The state’s pro-business Republican governor had ordered a public mural that told labor’s story and was prominently displayed at the Labor Department to be dismantled and packed away in a secret location. Schneiderman’s image was in the background of a panel that honored Frances Perkins, the U.S. secretary of labor under Franklin Roosevelt and the first woman to hold a Cabinet rank. And the agency’s conference rooms — named for Perkins, Schneiderman and Cesar Chavez — would also lose their special designations.

“I think it’s a sad commentary on what the future will bring, at least for this governor,” Valliere told the Forward in an interview. She said she worried about “what we’ll go back to when he’s done. I think it’s embarrassing for the state.”

Governor Paul LePage, elected only last January, drew nationwide attention when he decided to remove the 11-panel, 36-foot mural. The work, by artist Judy Taylor, pays tribute to Perkins, Maine’s first Labor Day celebration, shipbuilding by “Rosie the Riveters” during World War II, and other events in labor history. Commissioned in 2007 and financed in part by the federal government, the mural has been prominently displayed in the waiting room of the Department of Labor building in Augusta since 2008.

The governor said the artwork presented only labor’s side of history and that it was out of line with his pro-business agenda. The mural was taken down the same weekend that thousands of people joined in commemorations across the nation to honor the 146 immigrant men and women who died in the Triangle fire in 1911, a tragedy that spawned major reforms in American labor laws, building codes and fire safety.

Those who challenged the governor’s actions and sought a temporary restraining order lost a round in federal court on April 22, though the case will continue.

Numerous calls for comment to the governor’s press spokeswoman were not returned.

His office announced its intentions in March, and it was planning to find a home for the mural before removing it. But the office acted more swiftly after more than 200 people protested the proposed dismantling, and apparently after some of the protesters talked about using nonviolent civil disobedience to prevent the move, according to the Bangor Daily News.

The governor’s office had received half a dozen complaints about the mural’s themes and released an anonymous fax by a “secret admirer” who called the artwork “union propaganda” and said it reminded him of “communist North Korea, where they use these murals to brainwash the masses.”

Valliere countered that removing the mural was “exactly what the North Koreans would do, ripping down art.”

A social worker at a middle school, Valliere, 55, remembers her aunt as a very strong-minded, “cute old lady who always made sure she was well dressed and had her lipstick on.” Schneiderman, who never married, treated her nieces and nephews as if they were her own children. Valliere was 18 years old when her aunt passed away, and only as Valliere grew older and began to do family research did she learn about her aunt’s activism.

Rose Schneiderman’s shining moment came when she addressed a mass meeting of all strata of society at the Metropolitan Opera House after the Triangle fire. The meeting threatened to break up in disorder when she rose and challenged the crowd. “I would be a traitor to these poor burned bodies,” she said, “if I were to come here to talk about good fellowship. We have tried you good people of the public — and we have found you wanting.”

Schneiderman fought for worker rights for the rest of her career. She never lived in Maine, and Perkins lived there only part time.

Valliere said that Schneiderman would have felt honored when the mural first went up, especially because she is in the background of the Perkins panel. “I’m sure she would have been… disillusioned that all this effort had gone to changing things in the United States… creating laws and unions able to negotiate with policies, and here we’re turning downward,” Valliere said.

On April 1, six plaintiffs filed a lawsuit against the governor in U.S. District Court in Bangor, claiming he infringed on the mural artist’s First Amendment right to free speech. The plaintiffs also demanded that the mural’s secret location be disclosed and sought a temporary restraining order to force LePage to return the mural to the labor department’s walls. Taylor, the artist who created the painting, was not among the plaintiffs.

But on April 22, Judge John Woodcock Jr. agreed with LePage that the removal of the mural was a “permissible exercise of gubernatorial authority.” The judge wrote in his opinion that “the resolution of this vigorous debate must not rest with judicial authority of a federal court. It must rest instead with the ultimate authority of the people of the state of Maine to choose their leaders.”

The remaining issues in the suit include whether the governor should have held a public hearing before dismantling the artwork and the request for a permanent injunction that would return the mural to its first home. The attorneys for both sides will meet with the court for conferences on how to move forward with the case.

LePage has been a lightning rod for controversy, famously saying during the 2010 gubernatorial elections that President Obama could “go to hell.” He also declined to attend a dinner given by the National Association for the Advancement of Colored People, honoring Martin Luther King Jr. He called the NAACP a special interest group and said it could go “kiss my butt.”

LePage narrowly won election against Jewish independent candidate Eliot Cutler in a three-way race. An attorney, Cutler said he was flabbergasted when he found out about the governor’s decision to remove the mural.

“I think that turning your back on any important part of Maine’s history is a shortsighted thing for a governor to do,” he said. “All of the attention that he has brought to the state by dismantling the mural… can’t be described as moves that make the state a more attractive place for employers to bring business.”

Even so, Cutler agrees with the judge’s decision in the lawsuit against LePage. “This is not a free speech case, this is a simple matter of judgment, or lack of it.”

An Aunt’s Legacy Is Erased in Maine