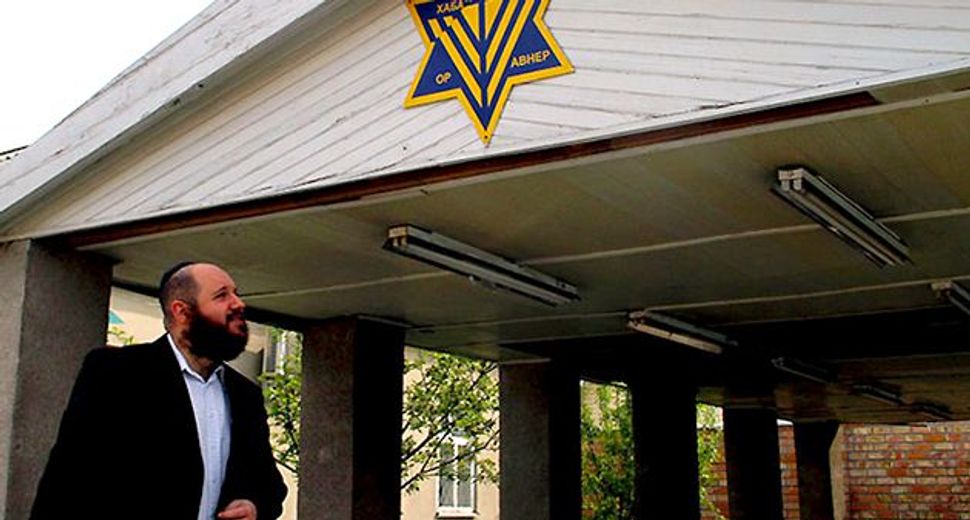 Still Standing:: Rabbi Arie Raichman stands in front of a gazebo on the grounds of the Bishkek synagogue. The structure was damaged slightly by a pipe bomb in September. Image by Josh Tapper

The main synagogue in this dusty, potholed capital city is a white, two-room chapel that calls to mind an old Quaker meetinghouse. Sitting next to a gazebo-covered courtyard, it feels like an oasis compared to the rundown conditions of nearby properties.

A cracked blue-and-yellow Star of David hung askew on the front of the gazebo, a glaring reminder of a pipe bomb flung over the gates right before Rosh Hashanah services last September. Luckily, the bomb landed in an inflatable swimming pool that the synagogue had recently purchased, causing only minor damage to the gazebo.

“It was a miracle,” chief rabbi Arie Raichman said, smiling behind his bushy black beard as he showed me photos of the damage from inside his office in the synagogue compound.

The Rosh Hashanah attack was the fourth such incident last year at the synagogue, shaking Kyrgyzstan’s Jewish community of roughly 1,500 members, the majority of whom live in the capital, Bishkek. Kyrgyzstan, a landlocked republic in the eastern part of Central Asia, is bordered on the north by Kazakhstan and on the east by China.

The pipe bomb was the coda to a six-month period of political and ethnic unrest in the small, nominally Islamic country, during which three Molotov cocktails were also tossed at the synagogue.

The unrest began in April 2010, when Bishkek’s streets erupted in riots that ultimately toppled the government of President Kurmanbek Bakiyev. The ousted president had come into office on a wave of hope, winning a 2005 election following the Tulip Revolution — one of the so-called “color revolutions” that swept through Lebanon and several former Soviet republics in the early 2000s. But Bakiyev was re-elected in a disputed 2009 ballot that disillusioned many democracy advocates. His tenure failed to curb corruption, while several of his own family members appeared to benefit from government appointments. The economy, meanwhile, under severe pressure from neighboring Russia, failed to improve.

During the 2010 riots, an anti-Semitic poster, blaming government malfeasance on prominent Kyrgyz and on foreign Jews, was displayed near the presidential White House. This was in addition to the attacks on the synagogue. A government investigation — prompted by a meeting between Raichman and the chief of presidential administration, Emilbek Kaptagaev — later blamed Islamic fundamentalists, not political protesters. Then in June, Osh, an ancient Silk Road city 400 miles south of Bishkek, experienced vicious ethnic violence between Kyrgyz and the town’s majority Uzbek population. At the time, the Jewish Agency for Israel reported that 60 families nationwide were preparing to make aliyah.

Today the situation has cooled, and the transitional government, under the ostensibly democratic President Roza Otunbayeva, seems to be headed toward free elections this October. Many Kyrgyz, Jews and non-Jews, I talked to, though, are taking a wait-and-see approach. Two revolutions in five years can breed uncertainty.

“Because of changes in the last year, we don’t know how things are going to be,” said Raichman, a Chabad emissary who has lived here for 11 years. “If there won’t be stability, it won’t be easy. But the Kyrgyz people are really warm people. What happened last year is really the first story of anti-Semitism.”

Indeed, from Kyrgyzstan’s independence in December 1991 until last year, anti-Semitism had been a nonissue, allowing Jews to live here in relative anonymity. The community consists largely of Ashkenazim, descendants of forced émigrés from across the Soviet Union, with a handful of Bukharan Jews sprinkled throughout the southern Fergana Valley, near the Uzbekistan border. In the 1940s, Jews numbered more than 40,000, but like other former Soviet republics, emigration has turned them into a tiny fraction of the country’s 5.5 million people.

In Bishkek, women wearing hip-hugger jeans and drunkards passed out on the sun-baked pavement belie the fact that at least 80% of Kyrgyz consider themselves Sunni Muslim. The country’s secularism led to indifference about its Jews. And since perestroika, Jewish institutions, like a kindergarten and a community center, have thrived. The synagogue holds a daily minyan, and the community newspaper, Mayan, recently celebrated its 15th anniversary.

The recent spate of attacks, though, seemed to suggest to Jews here that Kyrgyzstan’s laissez-faire brand of Islam might tack rightward. The Islamic Movement of Uzbekistan, which is linked to Al Qaeda, has a presence in the South, and whether it will be emboldened by the country’s shaky democratic arc is anyone’s guess.

“All your life you live in a peaceful country, with sun and green grass,” Raichman said. “Then one day there is a bomb, and everything changes. But life must continue.”

Meanwhile, the community contends with the challenges of emigration and assimilation. As I sat through a pre-Sabbath assembly at Pri Etz Chaim, the community’s Jewish day school, on a sweaty Friday afternoon, it became clear that the future constituents of Kyrgyz Jewish communal institutions might be a lot less European, not to mention a lot less Jewish.

Roughly 70 students, representing grades one through 11, slumped on benches in an upstairs common room, listening to the gym teacher deliver a primer on proper seating posture, a departure from the usual lecture on Jewish history or customs. Hidden away in a nondescript building, the school, funded by ORT, a Jewish group that sponsors education programs worldwide, provides kosher lunches, Hebrew and Jewish history lessons and courses in the Kyrgyz language and literature. The students, all yarmulke-clad, include Jewish and non-Jewish Kyrgyz, the latter often children of senior government officials. The Jewish students include some from mixed marriages whose fathers are Muslim.

“It helps out the community to know people in high places,” I was told by Vladimir Kritsman, the school principal since 1993. Those connections help to beef up security and pay the bills.

The confusing mix of Jews, Muslim-Jews and non-Jews prompted me to turn to Kritsman regularly for confirmation on which students were Jewish. As the posture lecture ended, I motioned to a Kyrgyz boy walking to the front of the room to recite Sabbath prayers. Was he Jewish? Kritsman nodded.

Then, as we headed toward the exit, he pointed to a petite tween in a pink sweater, sitting alone near the front of the room. “See that girl? See that girl?” he said excitedly. “Her mother works at the synagogue. Her name is Fatima.”