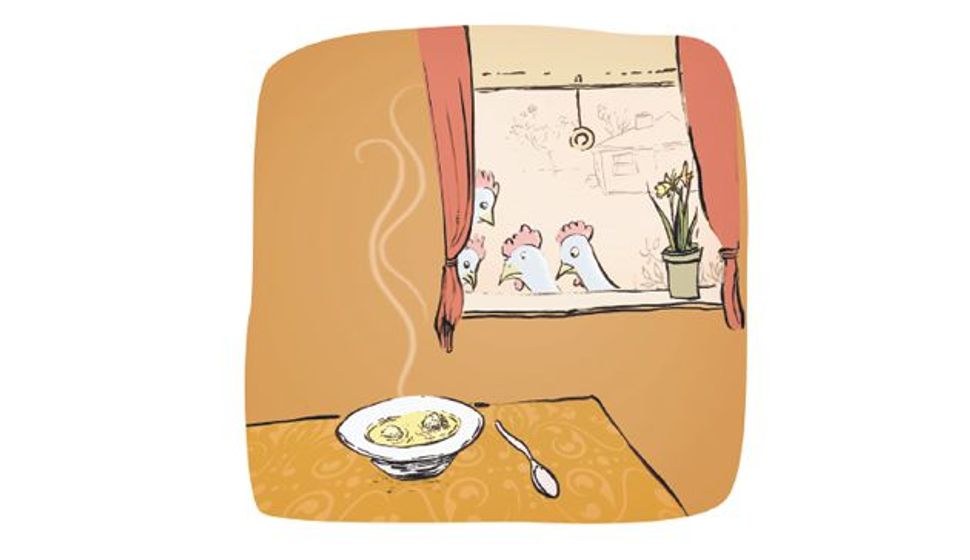 A million answers have been given (and a million jokes cracked) around the Passover question “Why is this night different from all other nights?” But this year, my Passover truly felt different. This year, for the first time since I became a vegetarian — nearly 11 years ago — I ate meat at the Seders. My matzo ball swam in a bowl of real chicken soup, and instead of passing along the platter of chicken roasted with thyme and oranges, I joined my tablemates in forking a piece onto my plate.

My mom remembers that I was never a big meat eater as a kid, preferring a diet of buttered noodles and peanut butter sandwiches to anything fleshy. But I have warm memories of the briny, paper-thin slices of corned beef we would buy by the pound from the deli, the hamburgers that came grilled and smoky at birthday parties, and the boiled chicken my brother and I ate with potato chips each Passover. As a Midwesterner, meat was simply a part of daily life — as inevitable as the frigid winters and the cornfields stretching along I-80.

So it was with great determination and pride that I said goodbye to my carnivorous life when I was a high school senior. This change was prompted by a textbook I read for class that illuminated the environmental damage connected with raising animals in factory farm conditions — things like water pollution, resource misuse and heavy greenhouse gas emissions. The next year, as a college freshman, I stumbled upon a graphic pamphlet, published by People for the Ethical Treatment of Animals, that offered visuals of the inside of a factory farm. I immediately went vegan.

For the next several years, I lived a radically animal-free existence. I learned to stir-fry tofu, and I hauled my leather shoes and belts to goodwill. I passed out pro-vegan literature on campus and experimented with egg-free baking. After years of lying dormant, my connection to Jewish tradition was simultaneously re-emerging, and being vegetarian quickly became my spiritual proxy, and practical default, for keeping kosher. It is virtually impossible, after all, to mix milk and meat, or to eat pork or shellfish, on a vegetarian diet.

As a sophomore I wrote a paper called “The Search for Judaism’s Vegetarian Ideal,” which mined Jewish texts for religious support to back up a meat-free lifestyle. In other words, I was in deep — and I stayed that way for nearly a decade. During that time, I did not miss my former eating habits, and even after I adopted eggs and milk back into my diet two years after becoming a vegan, I could not imagine a scenario where I would ever return to meat eating.

So this year’s Seder — after so many years of politely declining my host’s offers of gefilte fish and brisket and defending my diet at holiday gatherings — felt rather remarkable. Then again, the past few years have brought with them many meaty firsts. My first foray back into meat eating came in 2008 at the Hazon Food Conference, where participants had the opportunity to personally experience shechita, kosher ritual slaughter, and eat ethically raised and slaughtered goat cooked into a curry stew. But those two bites of goat meat, while powerful, did not immediately change my daily eating habits.

Over the past few months, after two years of keeping an entirely vegetarian/dairy home with my husband, we took a tiny step — in the shape of a Rubbermaid container filled with pots, pans and knives — toward cooking meat in our kitchen. I also purchased meat for the first time, published a cookbook that includes meat recipes (forever affixing my name to a book with miso-glazed chicken on the cover and a glamour shot of lamb chops inside) and ordered a meat dish at a local restaurant.

And yet, at the core of my being, I still have the soul of a vegetarian. Yes, I ate meat at the Seder, but I did not eat all of it. There were meatballs, a turkey roast and a few other flesh-centered dishes that I passed along as usual. The meat I did consume was from KOL Foods, a kosher sustainable meat and poultry company based in Washington, D.C., that strives to keep its environmental standards as high as its kosher standards. Before the holiday, my mother-in-law graciously purchased two chickens and some soup bones from KOL Foods. “We might be the first in-laws in the world to consider raw chicken a birthday gift,” she told me. Similarly, the chicken I bought for my home kitchen and the chicken I ordered at the restaurant were both supplied by another ethical kosher company in New York, called Grow and Behold. So while my outward practice may have changed, my overall values have not.

I’m hardly the first person to go through the transition from fervent vegan to occasional, ethical meat eater. Jonathan Safran Foer’s “Eating Animals” (Little, Brown and Company, 2009) offers a book-length exploration on this very question. And for many people, vegetarianism serves as an entry point — the first break from conventional eating that, over time, cultivates a deeper awareness and love of food.

Still, eating meat on Passover this year felt particularly significant. Each year, Passover arrives to remind us that, unlike our period of slavery in Ancient Egypt, we have the freedom to grow, the freedom to make choices for ourselves and to make them with care. Likewise, the seven weeks of counting the Omer after Passover and leading up to Shavuot remind us that, like the Israelites wandering in the desert, our lives and viewpoints are never static. Eleven years after first giving up meat, and three years since first eating it again, I still hold the opinion that a vegetable-centered diet is best and that factory farms are unsustainable. I have simply found a delicious new way to express it.