Treasured Judaica Library, Feared Lost, Is Back On the Market 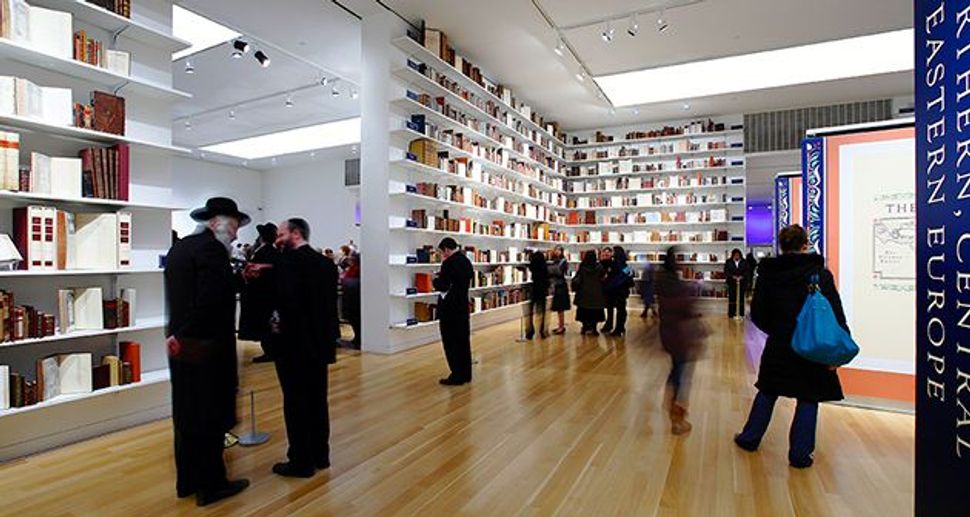 Viewing the Valmadonna: The collection was open to the public before Sotheby?s auction last December. Image by COURTESY OF SOTHEBY?S

One of the world’s largest and most valuable private Judaica libraries is up for sale, again.

To the consternation of Judaeophiles and scholarly libraries around the world, public access to the Valmadonna Trust Library — or even knowledge of its whereabouts — was feared to have been lost last December, with the selection of an anonymous buyer in a sealed bid auction conducted by Sotheby’s. Scholars braced for the potential breakup or disappearance of an unparalleled assemblage of rare and historic Jewish books and an incalculable loss to Western culture. Libraries rued its loss, perhaps forever, as a potential acquisition.

But the sale of the collection, the Forward has learned, never went through.

“It’s sitting a few feet from me right now,” said David Redden, a Sotheby’s vice-chairman, in an April 29 interview. Redden, who led the sale in New York, said that an anonymous bidder had met or exceeded the $25 million minimum set by the library’s trustees. But Jack Lunzer, who amassed the collection, told the Forward that the trustees had aborted the sale because the buyer failed to meet two stipulations for purchase: that the library be kept whole and be made available to scholars.

The library has been sitting in Sotheby’s New York offices ever since.

The Valmadonna collection was put together over many decades by Lunzer, a London diamond dealer now aged 86. But Redden said that the final decision about who may purchase the library can only be made by the Valmadonna Trust, a group of individuals unrelated to Lunzer who exercise legal responsibility for its sale.

The trust exists “to protect the books and manuscripts from being pillaged and sold,” Lunzer told the Forward. “It must be kept intact.”

Calling the auction “a fiasco,” Lunzer said, “The bidder couldn’t accept the conditions, which were clearly written…so his bid was withdrawn.”

The disclosure of these requirements, and their enforcement, will greatly relieve the scholarly community. The Valmadonna’s importance to Jewish history and culture is undisputed. The library contains more than 300 handwritten Hebrew documents, some almost 1,000 years old, and about 13,000 printed Hebrew books from the past 550 years, produced in centers of Jewish life across the world, many now forgotten. A three-week viewing of the Valmadonna collection at Sotheby’s in New York last year ahead of the auction was mobbed. At its peak, about 4,000 people viewed the exhibition each day, prompting lines that snaked around the block.

“Everybody understands the Valmadonna is a one-time opportunity to acquire the greatest Judaica library in private hands,” said Sharon Lieberman Mintz, curator of Jewish art at the Jewish Theological Seminary Library in New York and a senior consultant for Judaica at Sotheby’s. “Mr. Lunzer has created such a remarkable achievement, it really couldn’t be done again in the collecting and acquisition of Hebrew books.”

Lunzer began to amass the Valmadonna Library more than 50 years ago. His starting point was a small collection of Hebrew books that had been built up by the family of his wife, Ruth. (The collection is named after a town in Italy where her family had ties.) Gradually, Lunzer added rare and important works of Jewish literature. He acquired a Bible, completed in 1189, that is the only surviving, dated Hebrew manuscript from medieval England that was written before King Edward I’s 1290 edict expelling the Jews. He also collected dozens of books produced on vellum, silk or colored paper printed in Italy, Spain, Portugal, Ottoman Turkey and the city of Amsterdam from the 15th through the 18th centuries.

The centerpiece of his library is a 16th-century Babylonian Talmud that was coaxed out of the collection of Westminster Abbey, where it had lain for about 400 years. The Talmud was published by Daniel Bomberg, a Christian printer who was the first to publish a complete edition. The Abbey refused repeated attempts by Lunzer over a period of 25 years to buy the books. In 1980, Lunzer spotted an opening: A New York collector needed to unload the original charter of Westminster Abbey. Lunzer bought the charter and used it as a bargaining chip to persuade, some might say blackmail, the Abbey into letting the Talmud go.

Any number of institutions would love to acquire “Val,” as Lunzer refers to his life’s work. The Library of Congress came closest, in 2002, when it reportedly offered the Trust $20 million. Accounts of just what went wrong vary considerably. According to Redden, the Trust turned down the offer, which was significantly below the collection’s current valuation of some $30 million to $50 million.

Lunzer has claimed that the deal collapsed after some donors withdrew their support at the last minute. But the online publication Tablet reported recently that negotiations ended when the trustees raised their financial demands after the Library of Congress met their initial asking price of $20 million. James H. Billington, the Librarian of the Library of Congress who led that and subsequent efforts to purchase Valmadonna, declined to comment.

Redden, meanwhile, said that as word has trickled out about the falling-through of the December sale, he has fielded “many inquiries from institutions that have not been able to raise sufficient monies.” Redden declined to say which institutions had shown interest in the collection. But only a handful of institutions have the wherewithal to cope with such an enormous trove of literature. The National Library of Israel is one such institution. Major U.S. university libraries with highly regarded Judaic studies departments, such as Columbia, New York University and the University of Pennsylvania, have also been cited as potential buyers of Valmadonna.

But the cost of the library continues to prove a major stumbling block. Redden noted that the $25 million minimum bid would barely pay for “a lesser Picasso,” but that major libraries do not have nearly the same buying power as the typical consumer of high-end art. “Even the greatest institutions, like the Library of Congress, don’t have large sums of money available for acquisitions,” said Redden. “And if large sums do become available, they usually have a leaking roof to fix first.”

One institutional director who has been able to make a number of high-profile acquisitions in recent years is Thomas Staley, director of the Harry Ransom Center at the University of Texas at Austin. Since taking over the position in 1988, Staley has bought various collections, including the archives of Stella Adler, Bernard Malamud and Isaac Bashevis Singer. His most expensive purchase was the Woodward and Bernstein Watergate papers, in 2003, for $5 million.

Staley said that universities rely upon major donors and deep-pocketed alumni for such purchases. When the university wanted to buy the Singer archive, in 1993, for $500,000, he turned to one alum who helped make introductions to potential donors, many of them Jewish, in the Texas area. “I formed a minyan,” said Staley. “I got nine donors from Texas and one from across the Red River in Oklahoma, and they each put in $50,000.” But Staley described Valmadonna’s high price tag as “way out of our league.”

In the past, Lunzer has spoken of his desire for the library, “the story of our people,” to be purchased by a major institution where it could be shared with the world. But unless and until a donor steps forward and agrees to the trust’s stipulations, the collection will remain tantalizingly out of reach, like the Bomberg Talmud that eluded Lunzer for decades.

Treasured Judaica Library, Feared Lost, Is Back On the Market