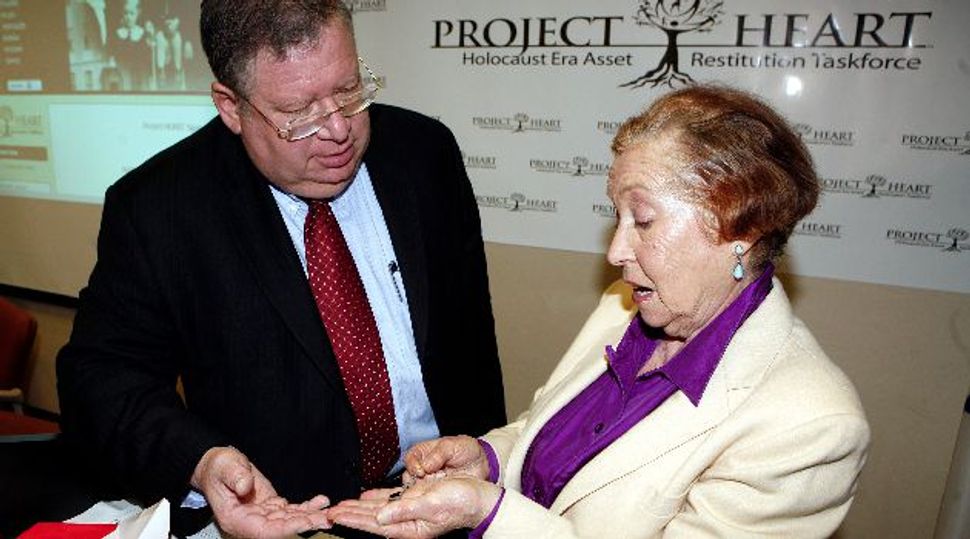 Israel’s first large-scale foray into Holocaust-era Jewish property restitution is ruffling some feathers within the Jewish establishment and among Eastern European countries.

The government of Israel, in cooperation with the Jewish Agency for Israel, recently announced the launch of Project HEART, the most robust attempt yet to document and pursue Jewish assets lost during World War II in Eastern Europe. Many of the losses were in Poland, which was home to Europe’s largest Jewish community before the Holocaust.

Officials behind this endeavor, which is funded by Israeli taxpayers, are hinting at the possibility of filing huge class-action lawsuits against governments that refuse to negotiate restitution settlements for Holocaust survivors and their heirs. Such legal action, argue officials involved in the restitution process, could lead to the breakdown of efforts to reach a negotiated agreement on restitution.

“Our philosophy is no more quiet diplomacy,” said Bobby Brown, executive director of Project HEART, an acronym for Holocaust Era Asset Restitution Taskforce. He said that the only big struggles of the Jewish community that bore fruit were those that succeeded in causing public outcry, such as the battle for Soviet Jewry. “If we don’t make it into an issue, nothing will be done,” Brown said.

Restitution discussions with Eastern European countries have thus far yielded little progress and have frustrated survivors and officials trying to negotiate with governments of the former Eastern bloc. But taking the struggle to the public arena and, moreover, introducing the threat of legal action, remain a delicate issue. An Israeli diplomatic source told the Forward that Poland has repeatedly warned against filing class-action lawsuits on behalf of survivors and their families and has made clear that aggressive action could undermine diplomatic talks aimed at resolving the issue. An official with the Polish embassy in Washington declined to speak on the issue and would only say that the government of Poland “is aware of the issue.”

Project HEART is a two-phase program. Its first part consists of building two databases, one listing possible Jewish claims and the other listing Jewish property in Eastern Europe.

In order to create the claims database, groups behind the project launched an outreach campaign that included not only information packets sent out to Jewish groups and organizations but also advertisements in major newspapers across the U.S. and a video message that is being shown every half hour on a giant screen in Times Square. Funding for this promotion came from an anonymous donor. Israeli Prime Minister Benjamin Netanyahu provided the group with a video message in which he endorses their appeal for claims.

“The response was just overwhelming. We can’t send the questionnaires out fast enough,” said Anya Verkhovskaya, the project’s Milwaukee-based director, who added that within the first six weeks more than 40,000 requests for forms had been received and 30,000 phone calls flooded the group’s 13-language call center. Verkhovskaya works with A.B. Data, a Wisconsin-based direct mail and fundraising company that also specializes in class-action suits. With the help of Verkhovskaya, the company was involved in major Holocaust asset-related litigation, including the lawsuit against Swiss banks, which led to a $15 billion settlement, and cases against the Generali insurance group and Austrian banks.

The second database, which was rolled out at a May 1 press conference in Jerusalem, includes a list of some 500,000 records documenting property that had belonged to Jews who lived under the Nazi occupation during World War II. It includes Jewish property that was confiscated by the Nazis as well as property that belonged to Holocaust victims that was not claimed after the war.

In the second phase, the two lists, which are expected to become the most comprehensive catalog to date of Jewish property and claims, will be used to launch a public campaign to make demands for restitution.

“We’re going to start knocking on doors, talking not only to governments but also to opposition groups and to non-Jewish organizations,” Brown said as he described how the public campaign would unfold. The group plans to set up offices in Washington, D.C., and Brussels, Belgium, once the lists are complete.

Brown also stressed that Project HEART will not rule out using the data collected in order to file future class-action lawsuits against Eastern European governments, more as a means of applying pressure than of actually having the courts determine compensation levels. “I don’t think any class-action suit will go to its end,” Brown said, “but the media will pick it up and will ask the governments some tough questions.”

According to an Israeli diplomatic source, the mention of class-action suits is viewed by Poland, the largest potential loser of any restitution settlement, as a non-starter and an act that could undermine other attempts to reach quiet understandings.

Negotiations to try to get Eastern European countries to accept financial responsibility for Jewish property have gained some momentum following the 2009 Prague conference. At the meeting, all 46 participating countries agreed to the principle of providing restitution for Jewish property from the Nazi era. But no agreements have been reached and, in the case of Poland, negotiations following the Prague conference led to no results. The issue of Jewish property is being raised frequently by Israeli diplomats, Jewish international organizations and by the U.S. government, through the office of the State Department special envoy for Holocaust issues.

The stepped-up approach offered by Project HEART has also been causing some tensions with existing groups working on Holocaust-era restitution under the umbrella of World Jewish Restitution Organization. The implied criticism of existing restitution institutes that is built into Project HEART’s credo and the active involvement of the government of Israel — both in funding, of $2.6 million a year for three years, and in political backing —aims to make Project HEART the largest property claims agency.

“I have no problem with the idea, per se,” said Julius Berman, chairman of the Conference on Jewish Material Claims, which deals primarily with claims from Germany and Austria. “But I think those behind Operation HEART (sic) should make it perfectly clear to people that the money is not around the corner.”

Berman also expressed skepticism about using class-action suits as a way to pressure Eastern European countries to play along. “The last thing you want to do is tell them that they are facing billions of dollars in compensation,” he said. “The bigger the sum you demand upfront, the greater the pressure they’ll face not to give in to the Jews.”