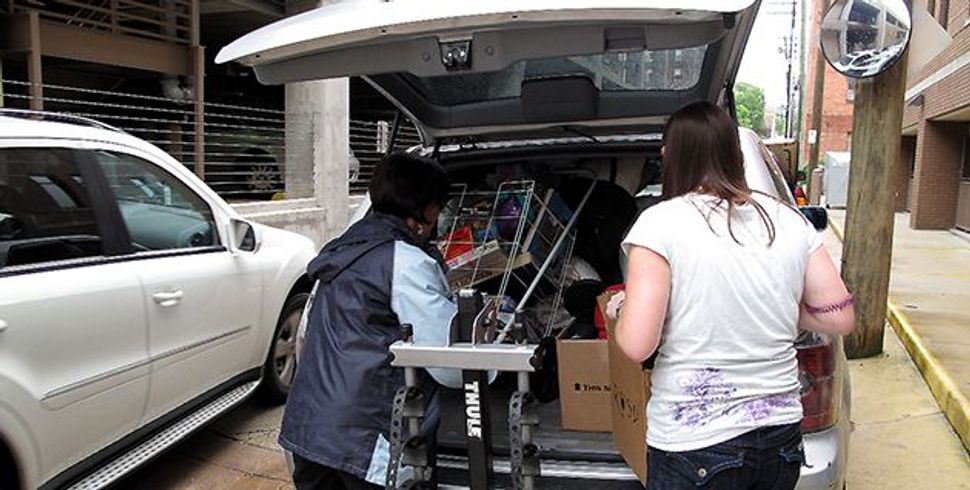 Shlepping and Sorting: A caravan of relief supplies is loaded into a car at Temple Emanue-El in Tuscaloosa, Ala., on May 3. Image by BARRY C. ALTMARK

Breathing a huge sigh of relief following some very close calls, Alabama’s Jewish community is mobilizing in response to a series of tornadoes that killed more than 250 people in the state and scores of others across the South.

There were no reported deaths in the Jewish community, and the Birmingham Jewish Federation, said that storm-related needs in the city’s Jewish community, which, at 5,200, is the state’s largest, “have been minimal.”

The local federation is coordinating relief efforts for Jewish Federations of North America and, together with Birmingham’s Collat Jewish Family Services, is partnering with United Way of Central Alabama. All funds that the organizations raise will go directly to victims through the Unmet Needs Committee — a coalition of non-profit and aid organizations.

The director of community relations at the Birmingham Jewish Federation, Joyce Spielberger, said the federation and CJFS are in “total coordination” with the broader community. With needs so widespread, “the most important thing is to work in coordination and not duplicate services,” she said.

Lauren Perlman, executive director of CJFS, said the Unmet Needs Committee will provide supplementary aid to storm victims, after they receive Red Cross and federal assistance. Following a 1998 tornado that devastated a smaller area in Birmingham, CJFS did relief management for two years. “We have a lot of experience at looking at the bigger picture,” she said.

The organization is currently looking for a donor or grant to provide for such services this time around, Perlman said. Already, the agency has been on the ground providing crisis counseling.

For several days, Spielberger has been coordinating a barrage of calls from individuals “who want to do and want to give.”

That the Jewish community fared better than the community at large is largely a matter of luck. One of the first tornadoes in Alabama on April 27 hit a Birmingham suburb where Knesseth Israel, the state’s only Orthodox congregation, and Bais Ariel Chabad Center are located, missing both institutions by a couple of blocks.

Nadav Raviv, who lives along that stretch and is a son of the former director of Birmingham’s Jewish day school, said the area “looks like a logging company came through.” He bought a chainsaw and started going around the neighborhood clearing trees. When local roads became passable, Raviv moved on to other hard-hit areas.

Later, a massive tornado cut through Tuscaloosa, missing the newly dedicated Bloom Hillel House at the University of Alabama and Temple Emanu-El by a few blocks. Hillel program director Kathy Merrell said: “The umbrellas stuck in the patio furniture are still as we left them,” which was difficult to fathom because “the devastation was so close to us.”

While the 700 Jewish students at the University of Alabama were reportedly all safe, some lost their housing. Many found new lodgings through the efforts of the historically Jewish Zeta Beta Tau fraternity; others returned to their family homes since final exams were cancelled and graduation festivities postponed until August.

Nettie and Gar Blume, members of the Tuscaloosa Jewish community, were in their law office in the city when the mile-wide tornado hit. They were pulled from the rubble without major injuries. Gar added that 15 bodies had been pulled from wreckage within a block of their building.

The Birmingham Jewish community is now in the very early stages of a plan to coordinate Jewish groups from around the country that want to come to Alabama and help rebuild. The effort is reminiscent of the ongoing effort by faith-based groups and non-profits to rebuild New Orleans in the wake of Hurricane Katrina.

Sheree and David Kanter, who relocated to Birmingham from New Orleans after Katrina, said, “We truly are so lucky to dodge the bullet again.” The couple is volunteering with the Red Cross at one of the shelters.

On May 2, the rabbi of Knesseth Israel, Eytan Yammer, went to Pleasant Grove, a hard-hit community near Birmingham, where you can find “10 square blocks where there’s nothing.” While there, he befriended some of the residents and a local pastor, and he plans to bring a small group of locals to Pleasant Grove “to schlep a little, sift through rubble, but mostly to be there for people and talk to them.”

On the weekend following the storm, Birmingham’s Temple Emanu-El, a Reform congrega tion, held an already-scheduled garage sale to benefit their pre-school; the $3,000 in proceeds were instead donated to tornado relief. Many people bought items that they turned around and contributed to the relief efforts. Congregants drove truckloads of goods to Tuscaloosa and Pratt City, near Birmingham, on May 3.

Richard Friedman, executive director of the Birmingham Jewish Federation, said the overwhelming outpouring of assistance across Alabama reminded him of the resolve Israelis have in the face of tragedy. “People respond instantaneously, the debris is cleaned up, help is extended and people find the fortitude to embrace life and begin living again,” he said.