American Soldiers in Iraq Enlist in a Different Kind of Service 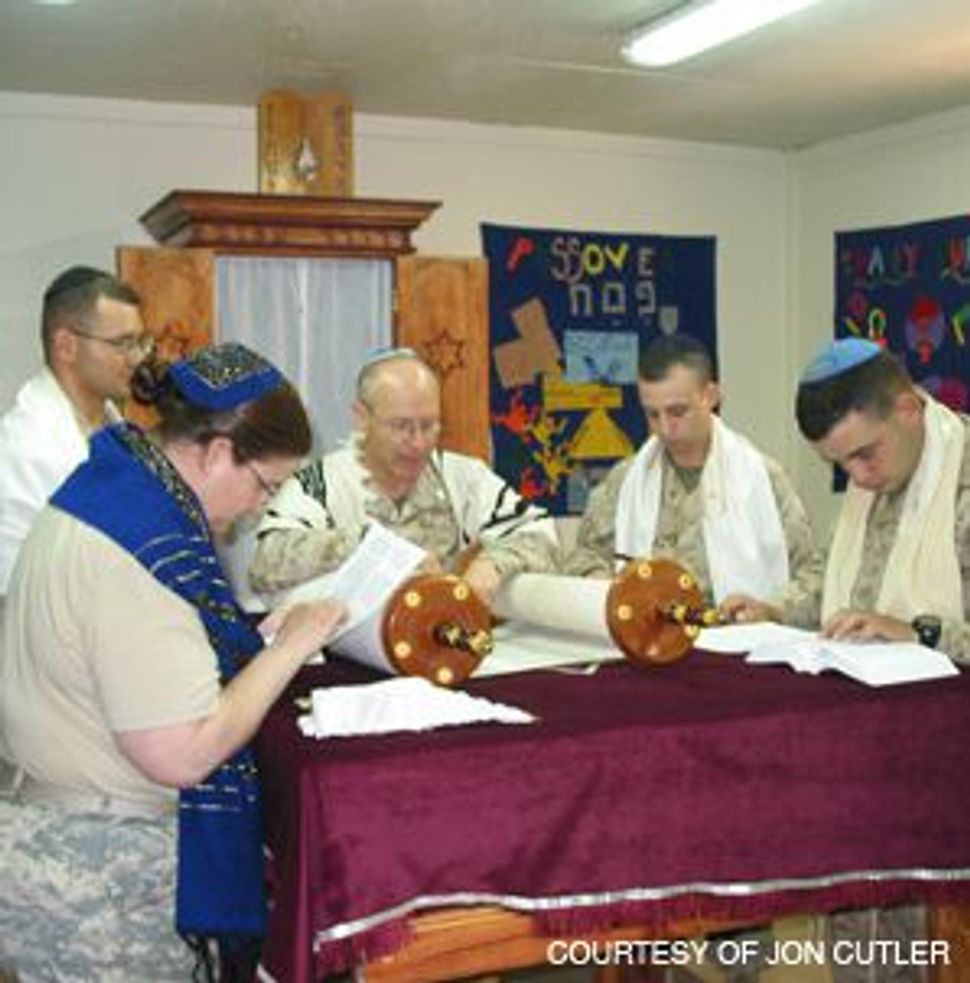 IN TRAINING: Chaplain Jon Cutler (center) leads services for a group of soldiers at Al Asad airbase in western Iraq.

A Jewish chapel at the Al Asad airbase in western Iraq was the site of an unusual Jewish gathering that began on July 4. 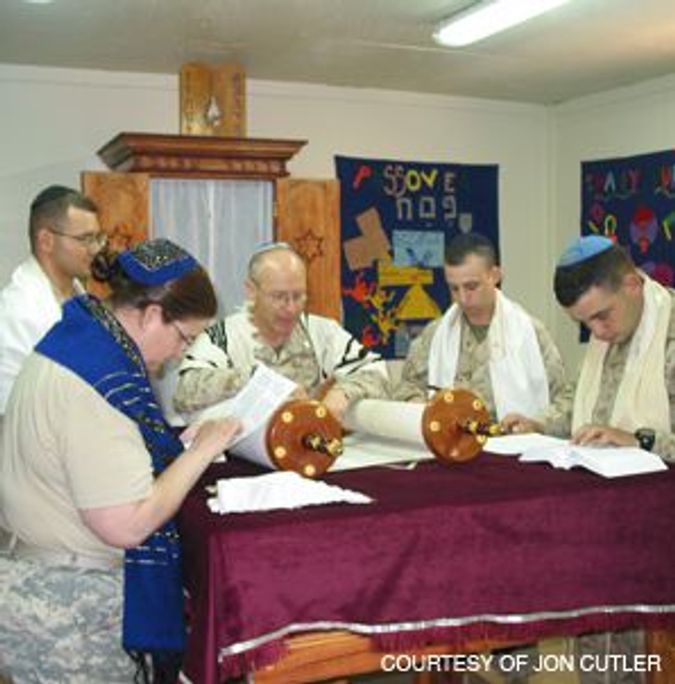 IN TRAINING: Chaplain Jon Cutler (center) leads services for a group of soldiers at Al Asad airbase in western Iraq.

Seven members of the American military had flown in from across Iraq for a precedent-setting training for Jewish leaders in that country. Iraq does not have much in the way of an indigenous Jewish population anymore, but the American military has brought scores of Jews to the region, most of them with little spiritual guidance.

To supplement the lack of rabbis in Iraq, one of the few Jewish chaplains in the country, Rabbi Jon Cutler, came up with the idea of training ordinary Jewish servicemen and -women to be lay leaders for other soldiers.

“People claim to be Jewish, and show up for High Holidays and leave it at that,” said 25-year-old Ari Jacobs, one of the participants in the event. “I kind of regret it. Now I can do services,” said Jacobs, who is a field medic at Al Taqaddum, in central Iraq.

The training was a new innovation for a military corps that has struggled to bring in rabbis to be chaplains. At the current time, there are only three rabbis in Iraq; Cutler is the only one in all of western Iraq.

“There are relatively few rabbis, a third of the number we had a generation ago,” said Harold L. Robinson, director of the Jewish Welfare Board Jewish Chaplains Council, which is responsible for finding Jewish chaplains. “The need for rabbis is as great as it ever was.”

The Jewish Welfare Board has done some training of lay leaders in America, including during previous wars; however, Robinson said, “Till now, lay leader training has been done on an individual, case-by-case basis.”

As for gathering a group of lay leaders for training in a combat theater, Robinson said, “I’m sure it was done in previous wars, but this is the first time I know of in this conflict.”

The weekend packed a wide-ranging Jewish education into just a few days.

After services Saturday, there were group discussions about topics such as Christian proselytizing and how to deal with non-Jews who are interested in taking part in services. Lay leaders also participated in a basic Judaism class and learned how to teach themselves Hebrew.

The conference officially concluded with bagels and prayers Sunday morning, though dust storms prevented attendees from returning to their bases that day, and they remained at Al Asad until Monday.

The guiding spirit behind the event was Cutler, a 52-year-old Reconstructionist rabbi from the Philadelphia area who has departed from the standard script for congregational rabbis. Cutler was ordained as a rabbi in 1987, and his 21-year career as a chaplain includes serving with the First Marine Expeditionary Corps in Saudi Arabia and in Kuwait during the first Gulf War.

In 1999, Cutler became the rabbi at Congregation Tiferes B’nai Israel in Warrington, Pa. He has kept his post in Pennsylvania since coming to Iraq last January; in fact, he telecommutes to his synagogue’s book group on a monthly basis.

But now, the bulk of Cutler’s life is spent trying to create a Jewish community in the desert expanses of Iraq.

In an e-mail to the Forward, Cutler wrote that “in my experience if there is not a Jewish chaplain Jews usually do not identify [themselves] and would most likely not go to a non-Jewish chaplain.”

Earlier this year, Cutler began traveling to bases in western Iraq and asking Jewish personnel if they wished to become lay leaders. He also enlisted Christian chaplains to find candidates.

In the end, the crew of seven people who came included convoy guards, medics, repairmen and executive officers, representing the Army, Navy and Marine Corps.

Getting all of them together was not an easy task. Each lay leader needed the approval of his or her commanding officer. In addition, they all needed to get special permission to attend the weekend and needed to find someone on base to take their place.

But after the weekend, few people were complaining.

“I learned a lot,” said Ross Abramowitz, 26, who is based at Camp Ramadi, west of Baghdad. “Not just about prayer — administrative issues, coordinating, working with chaplains and their assistants.”

He added: “As of right now, we have your basic Shabbat services on Fridays. I can greatly improve the quality of the service because of the training.”

American Soldiers in Iraq Enlist in a Different Kind of Service