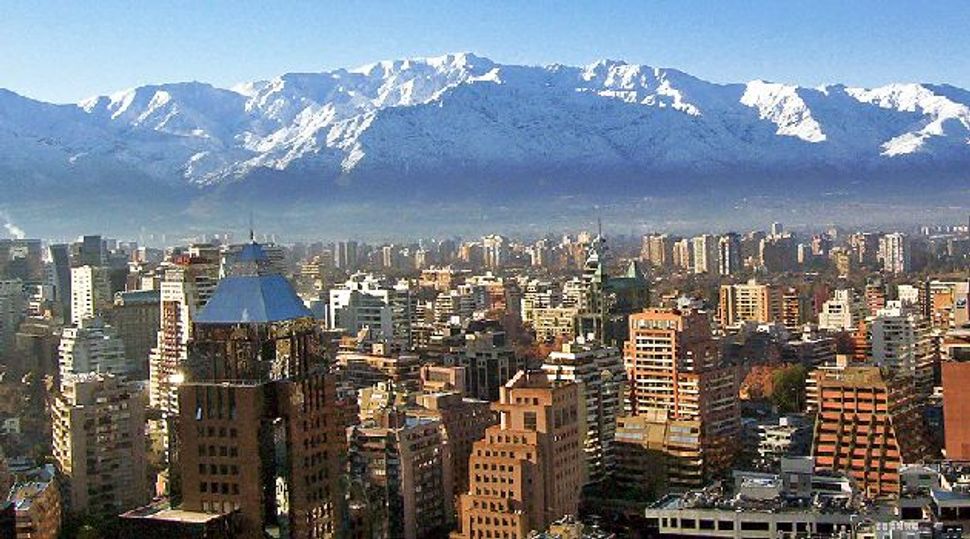 Culture of Tolerance: From kosher wineries to sprawling synagogues, Santiago, Chile is rife with Jewish history. Image by Wikicommons

“They say 20,000, and I say where?” tour guide Claudia Kravetz says of Chile’s Jewish population as we drive through the intersection of Las Condes and La Dehesa streets in Santiago’s Lo Barnechea neighborhood. With its wide, palm-tree-lined boulevards, reminiscent of Los Angeles, the area is nicknamed Little Israel for its concentration of synagogues.

The actual Jewish population here is roughly 15,000, says Kravetz, a lawyer by trade, who gives Jewish-themed tours of Santiago for Travel Jewish (www.traveljewish.com.) The extra 5,000 are Christian Evangelicals (akin to Jews for Jesus) who call themselves Jews. Of the 15,000, about 12,000 live in Santiago; the remainder mostly in Viña del Mar and Valparaiso, neighboring towns an hour and a half away from Santiago on the Pacific coast.

The area’s Jewish history stretches back to the Spanish conquest, when converso Rodrigo de Ordoñez arrived in Chile with Diego de Almagro, who discovered the country in 1535. “Conversos,” Spanish Jews who adopted Christianity after the expulsion of Jews from Spain, “thought they could live freely here, but this was not true,” Kravetz explains. The Spanish Inquisition followed them.

It was only in the late 1800s and early 1900s that a real community was established. Without synagogues. though, observance took place in private homes until 1916, when hundreds of Turkish and Russian Jewish families in Valparaiso formed the Sociedad Israelita Max Nordau. Comunidad Israelita de Valparaiso—Viña del Mar, (www.civv.cl.)

“The peak of community was in the 1960s,” Kravetz says, noting that immediately thereafter occurred “a very dark period for 20 years,” mostly because of assimilation and immigration to Israel. “Many people only got together for the High Holidays,” she says. Santiago also suburbanized eastward around that time, toward Las Condes and Lo Barnechea. Today, the community continues to thrive and is building new centers for Jewish life.

Kravetz’s tour includes a visit to Estadio Israelita Maccabi (www.eim.cl,) a 4,000-member Jewish community center with a strong emphasis on sports. The center was once home to Or Shalom Temple, which closed in 2007, and the grounds now hold a Shoah monument donated by Polish-born Holocaust survivor David Feuerstein, similar to the one he gave Yad Vashem, inscribed with his Auschwitz number: 160023.

Although street barriers block the Estadio and other sites we visit, Kravetz assures me that “it’s pretty safe,” for Jews in Santiago. Neo-Nazism does exist, however, as covered in a 2008 PBS “Frontline” episode that documented the rise of 30 neo-Nazi cells with about 1,000 members in total. Kravetz even recounted being mentioned on a death threat list on one now-defunct website when she was president of the Jewish Youth of Chile from 2005 to 2007. “I never felt scared,” she says.

Kravetz reminds me that Chile’s current president, Sebastian Piñera, was the first Chilean president to visit Israel, and the Minister of the Interior, Rodrigo Hinzpeter, is Jewish. There is also a community security office, Oficina de Seguridad Comunitaria, that monitors Jewish safety.

Our next stop is the brand new Comunidad Israelita de Santiago (www.cis.cl.) The 800-seat Conservative synagogue opened in 2010, replacing the Great Synagogue downtown, in a ceremony presided over by Piñera. With grounds that contain 18 copper columns and nine Israeli olive trees, it is the largest synagogue building in South America and has one of the largest active congregations. For the High Holidays, when up to 4,000 people come, services move to a hotel.

The synagogue’s rabbi, Eduardo Waingortin, who came to Chile from Argentina in 1988, says that Chilean culture is one of tolerance. “There is a favorable climate, and Jews are moving here now from Argentina, Venezuela, Peru, places that are less stable” economically and politically. For these reasons, he feels the community will grow, though, he says, “assimilation is easy in an open society, so we have to work harder so people don’t assimilate.”

Next, we visit Chabad House — spelled “Jabad” here — to meet with Brooklyn native Chaya Perman, Chabad’s co-director and the wife of its rabbi, Menashe Perman. Perman tells us that “15 families, big families,” make up the congregation, and that the sanctuary seats 500. She talks proudly of Santiago’s growing Jewish community: “It’s not a matter of religious or not. People are becoming closer to their roots.”

Perman notes that many of Santiago’s middle-aged Jews are not very observant, because, she surmises, “I think in South America, people were afraid at first after World War II.” But now, she finds grandparents teaching grandchildren, something the Chabad House is playing a role in. “If you’re Jewish you’re welcome at Chabad, even if you’re not observant,” Perman says, adding, “Our goal is to unite the Jewish people.” With that, Perman mentions a Chabad House in Pucon, about 500 miles south, that is popular with Israeli backpackers and other Jewish tourists. (www.jabadchile.com)

After feasting on kosher burgers (there wasn’t any wine, but Kravetz mentions the Chilean kosher winery, Alfasi), I left the Chabad House, and shortly thereafter, Santiago. Unfortuna-tely, I missed a tour highlight, Bomba Israel (www.bombaisrael.cl,) the Jewish firehouse established in Ñuñoa in 1954. Jews have largely relocated, but the firehouse remains, supported by donations from the greater Jewish community, and still contains a fire truck with Hebrew writing. “It gives the Jewish community a good name, and it’s a way of thanking the Chileans for welcoming our grandparents,” Kravetz offers.

It’ll be something to see on my next visit, after a trip to Alfasi to taste the wine, of course.

Michael Luongo is the author of the “Frommer’s Buenos Aires” guide and many other travel books.