In South Florida Congressional Race, Incumbent and Challenger Have the Ethnic Bases Covered 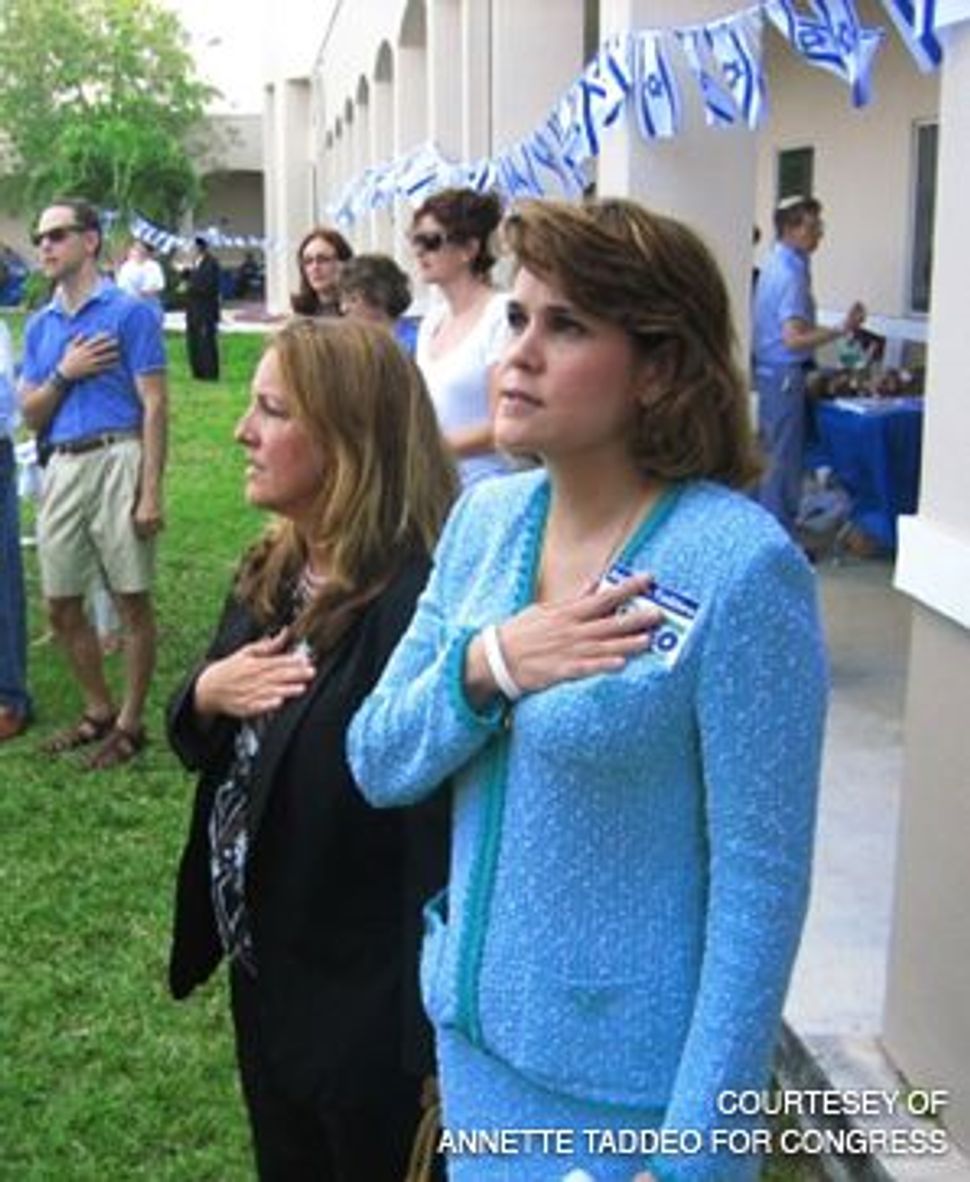 THE CHALLENGER: Annette Taddeo, right, a convert to Judaism, attended a Miami-area celebration of Israel?s 60th anniversary in May, during her campaign to unseat Rep. Ileana Ros-Lehtinen.

If there is any question as to whether Hispanic Jews are gaining prominence in South Florida, look no further than a local congressional race, where two candidates going head to head in a primarily Hispanic district have ties to both Latin America and the Jewish faith. 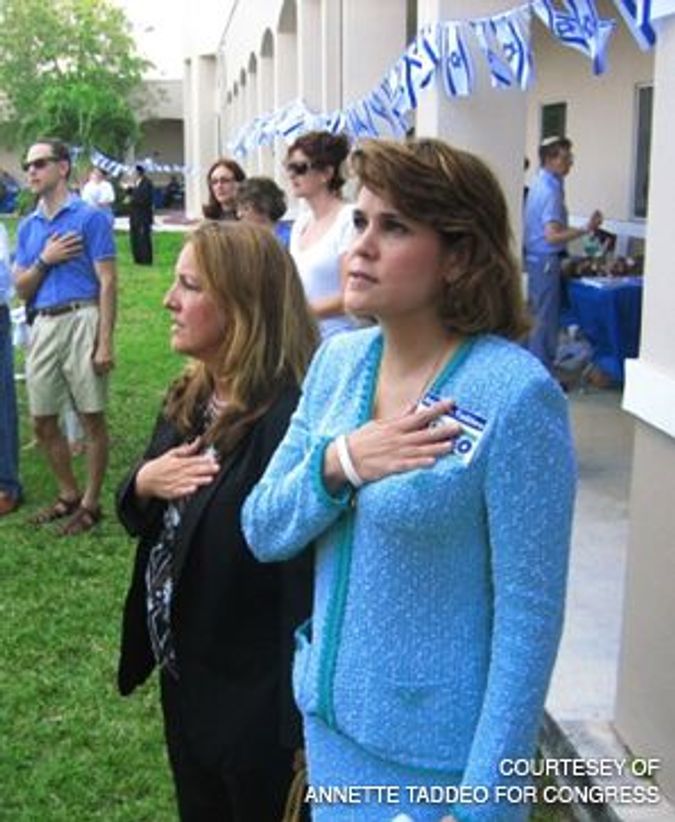 THE CHALLENGER: Annette Taddeo, right, a convert to Judaism, attended a Miami-area celebration of Israel?s 60th anniversary in May, during her campaign to unseat Rep. Ileana Ros-Lehtinen.

In the 18th congressional district in Miami-Dade County — home to the neighborhood known as “Little Havana” — the Cuban-American Republican incumbent, Ileana Ros-Lehtinen, is descended from one of the real Havana’s Jewish families. Meanwhile, the House member’s Democratic challenger, Annette Taddeo, is a Colombian-born business leader who converted to Judaism.

This match-up is telling. South Florida, long home to Hispanics who emigrated from Cuba and elsewhere in Latin America, and to Jews, who largely migrated south from the Northeast in earlier decades, has been an epicenter of both Hispanic and Jewish life in America. Now, it appears, those two worlds are overlapping as the population of Hispanic Jews is exploding. And while their numbers are still too small to swing an election, Hispanic Jews do, as a bloc, seem to have one issue at the top of their agenda: Israel.

“One of the uniting forces is their commitment to Israel,” said Gary Bomzer, executive director of the Michael-Ann Russell Jewish Community Center in North Miami-Dade County, referring to Hispanic Jews. “We had an Israel 60th celebration, and about 6,000 people showed up. The majority of them were Latin American.”

Bomzer’s JCC, while not located directly in the 18th district — which includes the City of Miami, South Beach, Coral Gables and all of the Florida Keys — draws its membership from across Miami-Dade County. And the majority of the JCC’s membership is Latin American; some 60% hail from Colombia, Venezuela, Cuba and Mexico. Even the Jewish Federation of Greater Miami has its own Latin division, as well as a separate Cuban division.

It’s no surprise, therefore, that Ros-Lehtinen — widely considered one of the strongest pro-Israel voices on Capitol Hill — and her challenger are both stalwart supporters of the Jewish state. But that’s where their similarities end, in terms of both politics and personal narrative.

“Israel is the one area where I don’t disagree with her,” Taddeo said in an interview with the Forward, referring to Ros-Lehtinen. “My goal is to let voters know they will not lose a representative in Congress who is pro-Israel, they will gain a leader who is very passionate about it, as well as someone with Democratic values.”

Taddeo also noted that because her family was targeted by the FARC — a leftist terrorist group that has waged war on the Colombian government for decades — she has a personal understanding of terrorism. “We as Latin Americans tend to understand how terrorist organizations work, and how they are so detrimental to peace.”

Ros-Lehtinen was not available for an interview. Her campaign, however, released a statement detailing her record in Congress. Among other things, Ros-Lehtinen led the charge on Capitol Hill to uncover terrorist links to the 1994 Jewish community center bombing in Buenos Aires, Argentina.

Taddeo, 41, chose Judaism over Catholicism while in her mid-20s. She was born to a Colombian woman and an American soldier who started the first helicopter school in South America. Taddeo moved to Miami as a teenager and began studying Judaism in her early 20s. At 26 she converted, after being turned down three times — a part of the conversion process intended to test the prospective convert’s devotion to becoming Jewish. She now belongs to a local Conservative synagogue, Beth David Congregation, and is looking at Jewish preschools for her 2-year-old daughter. And in another indication of the fast-growing Hispanic Jewish population, Taddeo’s rabbi is Argentine.

Ros-Lehtinen, 56, was raised Catholic after her Jewish mother left the faith. She does not practice Judaism, but in recent years she has begun to speak openly about her Jewish roots. Her maternal grandparents, the Adatos, were Turkish Jews who moved to Havana and helped found its first synagogue. Part of her notoriety stems from the fact that she was the first Cuban-American representative in Congress.

Exactly how many Hispanic Jews reside in the 18th district proper is not known, but figures for Miami-Dade County on the whole show a sharp increase. The latest demographic study, undertaken in 2004, found that 10% of Jewish adults in the county, or a total of 9,500, considered themselves Hispanic. That figure almost doubled from 1994, when few more than 5,000 Hispanic Jews lived in Miami-Dade.

“All reports are that more and more Hispanic Jews are moving out of Latin America and to Miami,” said Ira Sheskin, the Jewish demographer who administered the study. “And all of the anecdotal evidence suggests an increase in Hispanic Jews since 2004.”

Sheskin, a professor of geography at the University of Miami, also said that while the numbers are clearly growing, not all the Hispanic Jewish newcomers could claim American citizenship. “They may or may not be voting yet,” he explained.

The 18th district itself is about 50% Hispanic and is estimated to be between 6% and 8% Jewish. Ros-Lehtinen has enjoyed soaring popularity with Cubans and non-Cuban Hispanics alike, as well as with Jewish voters. As a result of the district’s composition and Ros-Lehtinen’s long-term standing, a Taddeo win appears unlikely.

While Taddeo is far more liberal than Ros-Lehtinen, who supported the Iraq War and is fiercely pro-life, the district itself is nearly 40% Republican. Ros-Lehtinen also has strong ties to the Bush family: Jeb Bush was her campaign manager when she first ran for office in 1989. Taddeo, who opposes the Iraq War and is pro-choice, is hoping that anti-Bush sentiment will work in her favor. She is also hoping to garner independent votes, as well as to register enough new Democratic voters to tip the scales in her direction.

Still, Taddeo has an uphill battle to wage. Ros-Lehtinen is a 10-term incumbent with a solid base of support. Her signature issues are Israel and Cuba, where she toes a hard anti-Castro line. But, political observers say, she also has done a good job of tending to local concerns. As a result, even in a year when a Democratic sweep appears to be in the cards, Ros-Lehtinen is a formidable Republican incumbent to unseat.

Indeed, a recent poll — the first to be conducted on the race — showed Ros-Lehtinen with a commanding lead over Taddeo. The poll, released early this month by Bendixen & Associates, a public opinion research firm based in Coral Gables, Fla., that has close ties to the Democratic Party, showed Ros-Lehtinen — who has gone largely unchallenged in past races — leading Taddeo 58% to 31% with 11% undecided.

“It’s an impressive number for the incumbent at this stage of the race, given that it seems to be a strong Democratic year,” said Fernand Amandi, executive vice president of Bendixen & Associates. “It’s a testament to the hard work Ros-Lehtinen has done branching outside of her base constituency, which is the Cuban community.”

Dario Moreno, a professor of political science at Florida International University, said that Taddeo has lesser name recognition than the other two Democratic challengers. “She hasn’t really got her name out there,” he said. “But it’s still early.”

In South Florida Congressional Race, Incumbent and Challenger Have the Ethnic Bases Covered