From Humble Lumber Sellers to Clout-Wielding Developers: An Immigrant Tale 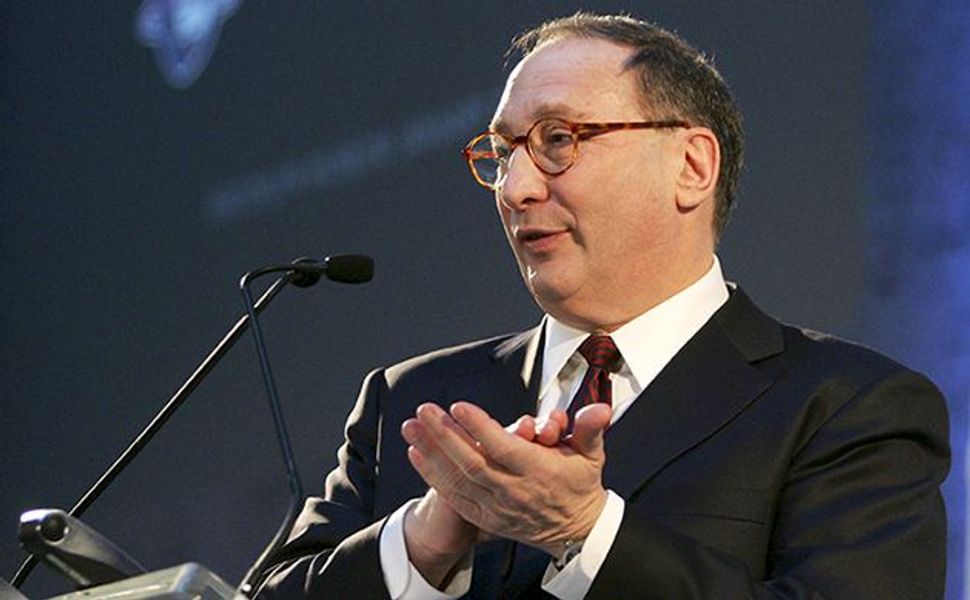 Two Views: To his defenders, Bruce Ratner is a hero of Brooklyn?s rebirth. But others have fought his major development project, a residential and business complex, for a decade. Image by Getty Images

When federal prosecutors charged New York State Senator Carl Kruger with taking more than $1 million in bribes in March, few were surprised to see seven others indicted with him. The colorful Kruger, who represents the heavily Jewish Brooklyn neighborhoods of Brighton Beach, Gravesend and Sheepshead Bay, has long attracted media attention for high-profile deal-making among a wide network of politicians and lobbyists.

But the scandal has also swept into its purview an affiliate of one of the country’s most prominent real estate developers, throwing a spotlight on the storied Jewish family that controls it.

Among those indicted was Richard Lipsky, a state lobbyist, who is alleged to have offered bribes to Kruger in exchange for political favors. In FBI wiretaps, Lipsky allegedly conspires with Kruger to share Lipsky’s lobbying fees in exchange for legislative approval of his clients’ projects.

One of the clients the indictment alleges Kruger helped in response to Lipsky’s payoffs is a company labeled “real estate developer #1” that was “spearheading an over $4 billion, multi-year, mixed-use commercial and residential development project in Brooklyn.” That company has been identified in multiple news reports as Forest City Ratner, the developer behind the Atlantic Yards project, a 22-acre residential and retail complex in Brooklyn. An executive for FCR is also captured on wiretaps talking with Kruger about seeking state money for development projects, and this conversation is included in the indictment.

Prosecutors did not charge anyone at FCR with wrongdoing, and there is no indication that FCR knew of Lipsky’s alleged actions. The company’s spokesman emphasized to The New York Times that the indictment “does not suggest that Forest City Ratner behaved in any way that’s inappropriate.” (The spokesman, Joe DePlasco, told the Forward that FCR was not commenting further on the Kruger matter.)

Nevertheless, the Kruger scandal has brought new attention to the business practices of a family-run firm whose real-estate developments have long attracted controversy for using public cash to support private projects.

At the center of the dispute: Bruce Ratner, the camera-shy scion of a storied Cleveland real estate family, who has gained attention in New York for building the new New York Times building, buying the New Jersey Nets with the intention of moving the team to Brooklyn, and remaking the Brooklyn skyline with a series of skyscrapers that are both lauded and reviled by locals. To his defenders, Ratner is a hero of Brooklyn’s rebirth; to his critics, he’s a businessman who has made a career of using his political connections to secure large government subsidies for his development projects.

“Ratner himself, and many of the people in his top echelon, are very politically well-connected,” said Candace Carponter, an attorney who has spent much of the past decade fighting Ratner’s plan to relocate two blocks of homes and businesses in Brooklyn to make way for his now-under-construction basketball arena and Atlantic Yards housing and office complex. “They have this seemingly endless knowledge of different government benefits and grant programs, and they have access to the people who approve that money. One of the biggest problems with dealing with them is this carte blanche they seem to have because of their relationships with the city government.”

Via e-mail, spokesman DePlasco dismissed complaints about his company seeking public subsidies, saying, “Many Forest City Ratner [projects] have been public-private partnerships, given their specific economic-development components.” Ratner’s real goal, he insisted, is to improve quality of life: “You bring a supermarket into downtown Brooklyn/Prospect Heights/Fort Greene (as [Ratner] did with Atlantic Center), you are basically saving people money by providing them with more choice.”

It’s two very different images of a company run by a family with deep roots in both high-powered real estate and progressive politics. FCR is the New York branch of Forest City Enterprises, which was founded in the 1920s by siblings Charles, Leonard, Max and Fannye Ratner in Cleveland as a lumber supply company. A fifth sibling, Harry — Bruce’s father — started his own building supply firm. Today the onetime lumber supply company founded by Jewish immigrants from Poland has a real estate portfolio estimated on the firm’s website at $11.8 billion. Its big-ticket projects include an upscale shopping center in San Francisco; a mixed-use redevelopment near MIT in Cambridge, Mass.; a residential development on the site of the old Illinois Central terminal in Chicago; and, of course, the new New York Times building, designed by architect Renzo Piano.

Far afield from real estate development, some members of the close-knit family have made names for themselves as political progressives, both in and out of — and sometimes protesting — government. They include Harry’s other son, Michael Ratner, executive director of the Center for Constitutional Rights, which successfully sued the George W. Bush administration for its denial of habeas corpus to Guantanamo terrorism suspects after 9/11 (but saw its suit against Israeli General Moshe Ya’alon for alleged war crimes during Israel’s 2006 conflict in Lebanon dismissed); and Harry’s daughter, Ellen Ratner, a White House correspondent for the Talk Radio News Service and a liberal commentator on Fox News. Lizzy Ratner, Bruce’s daughter, has become prominent as a journalist and anti-Zionist author; while Aaron David Miller, Leonard’s grandson, attained prominence as a senior State Department official and Middle East peace process negotiator over three administrations.

Bruce Ratner, the CEO of New York’s Forest City Ratner, initially seemed headed in a political direction as well. He served two stints in New York City’s Department of Consumer Affairs under Mayors John Lindsay and Ed Koch, the second time as commissioner. In 1988, however, he shifted gears, convincing his Cleveland cousins to bankroll him in starting the New York branch of his family’s development business.

Ratner’s connections to Kruger first became public when Lipsky, whose clients included Ratner as well as major city unions and business groups, was caught on FBI wiretaps allegedly conspiring with Kruger to share his clients’ lobbying fees with Kruger in exchange for legislative approval of his clients’ projects. It subsequently emerged that the same wiretap had caught FCR vice president Bruce Bender — a longtime friend of Kruger’s from their days in Southern Brooklyn’s Thomas Jefferson Democratic Club — negotiating with Kruger for state money for several FCR development projects, including a $9 million bridge to replace one demolished during the Nets arena construction, and the redevelopment of a skating rink in nearby Prospect Park by a nonprofit group on whose board Bender’s wife sits. Kruger ultimately committed to securing $4.5 million for the skating rink.

Kruger and his co-defendants have pleaded not guilty to all charges. The case is now in what’s expected to be a lengthy discovery phase, involving an estimated 100,000 pages of documents and 30,000 taped phone calls.

FCR has a history of seeking government funds to build its developments, a practice also vigorously pursued by Bruce Ratner’s cousins at Cleveland-based Forest City Enterprises.

FCE’s mammoth Stapleton project in Denver, which turned a derelict airport into a new neighborhood of 12,000 homes, received $294 million in tax-increment financing, or TIF money, a mechanism whereby property taxes in a development district are paid to the developer instead of going into city coffers. In 2009, FCE received $500 million in TIF money to build the Alabama Motorsports Park, a racetrack complex in Mobile County, Ala.

Meanwhile, back in New York, Bruce Ratner chose downtown Brooklyn for his first major development project: Metrotech, a sprawling campus of office towers that opened in the early 1990s. The project was ultimately a success — JP Morgan Chase and Bear Stearns were among the companies that located offices there. According to the subsidy-watch group Good Jobs New York, this was aided by $300 million in city rent subsidies Ratner secured for its already well-heeled prime tenants.

Most New Yorkers, though, first came to know Ratner in December 2003, when he announced his vision for Atlantic Yards, a breathtaking plan for a large bloc of Frank Gehry-designed residential and commercial skyscrapers around a basketball arena that would serve as the new home of the New Jersey Nets — which he was in the process of buying. The land in question didn’t yet belong to Ratner: It combined rail yards owned by the regional Metropolitan Transit Authority with neighboring brownstones and low-rise commercial buildings that would be taken by the government via eminent domain and razed for the project.

The announcement set off a years-long battle that included fierce opposition to the project from Brooklyn preservationists, including celebrity Brooklynites like Steve Buscemi and Jonathan Lethem. The critics decried what they predicted would be downtown Brooklyn’s “Manhattanization.” They also charged that Ratner got the land from the state transportation agency at a cut-rate price of $100 million, and that the developer was later allowed to spread out payments for it over 21 years. At the site itself, a bitter eminent domain fight ensued with the owners of those low-rise buildings. The patrons of a local tavern, Freddy’s, chained themselves to the bar in symbolic resistance to Ratner’s wrecking ball.

Ratner pledged that at least 30% of the project’s units would be reserved for low- or moderate-income tenants. This won FCR the support of affordable housing advocates, most notably ACORN, the grassroots community group, which signed an affordable housing memorandum of understanding with Ratner in 2005.

The result, however, is not much like what Ratner envisioned back in 2003: The office tower is gone, a victim of the commercial real-estate crash, and the residential buildings may come in the form of prefabricated modular towers, if they’re built at all. Even the arena, now taking shape on the corner of Flatbush and Atlantic Avenues, has ditched its Gehry design for a less pricey look. As for the promised affordable housing, the New York Post reported in March that Ratner’s most recent SEC filings warn that rising construction costs or interest rates could cause him to “not be able to develop Brooklyn Atlantic Yards to the extent intended or at all.”

DePlasco says that Ratner “remains 100% committed” to Atlantic Yards and its original goals, including job creation. “I think all of this stems from his sense of what it means to be a good corporate citizen,” said DePlasco, and “from a sense that he, like his brother, [wants] to do what he thinks is right and helpful.”

Carponter, seeing the vacant lots standing in place of the buildings torn down to make way for Atlantic Yards, thinks otherwise. “They really are not beyond using people,” she says. “Is this different from any developer? They seem to do it on a grand scale. Maybe they’re just much better at it than other people.”

From Humble Lumber Sellers to Clout-Wielding Developers: An Immigrant Tale