For Surviving Soviet Veterans, Victory Day Is a Dying Celebration 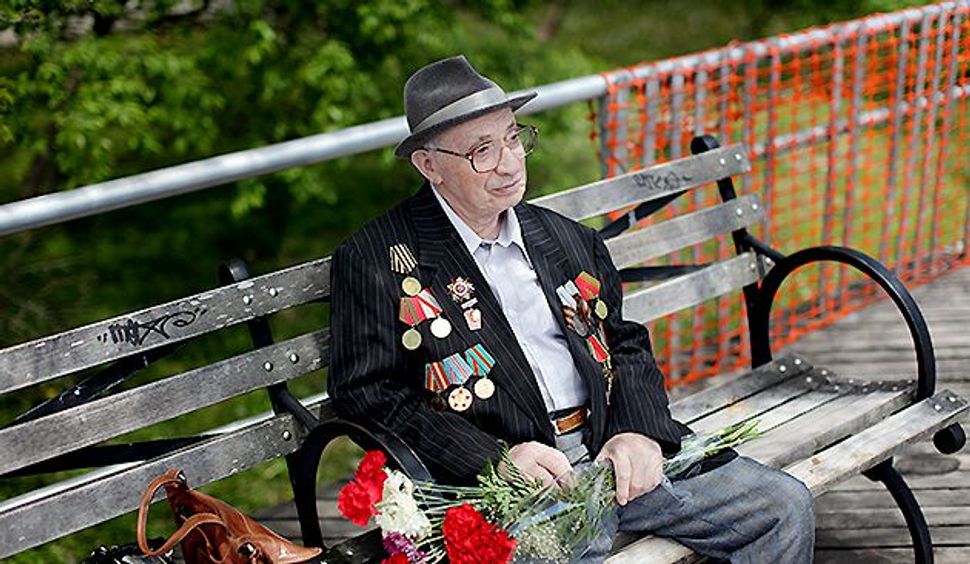 Their gold and silver medals glinting in the late morning sun, David Rosenberg, Victor Levinson and Mikhail Rabkin stood among a small group of men on Brooklyn’s Brighton Beach Avenue, dressed in their finest clothes. On that day, May 9, across the former Soviet Union their comrades-in-arms were being feted as heroes in grandiose Victory Day parades.

In Brighton Beach they were heroes too, though on a much smaller scale. As they stood proudly, chatting in Russian about a war that ended 66 years ago and about more recent battles with age and ill health, women stopped to give them flowers, while men stepped forward to vigorously pump their hands. “Thank you for everything,” said one young man, who had doubled back after passing the group. “Be well!”

In years gone by, Levinson and his fellow Red Army veterans in Brooklyn, most of them Jewish, marched along the boardwalk at Brighton Beach on Victory Day, where they were greeted by hundreds of people. Last year, when the day fell on a Sunday, there was music, dancing and tears.

But this year, the parade was not to be. The American Association of Invalids & Veterans of World War II decided that because May 9 fell on a Monday, there would have been too few well-wishers to give the remaining veterans the respect they deserved. Instead, the association’s president, Leonid Rozenberg, organized a small public get-together on the corner of Brighton Beach and Coney Island avenues, at noon.

A couple of hours before the veterans were due to meet, word filtered out that Rozenberg was ill, reportedly with heart trouble, and the event was canceled. Instead, fewer than a dozen men formed their own impromptu gathering on the sidewalk outside the glitzy Russian nightclub Oceana. “If he was here,” one veteran said of Rozenberg, “it would have been different.”

Moments later, a woman walked by, pushing a stroller topped with a small pile of flowers and handed them out individually to the veterans.

“They are the best of the best, these people,” Tatiana Borshchevskaya said, in English. “But every year there is less and less of them. They need an orchestra, they need music… so that they can go outside and march.”

Borshchevskaya, 40, is originally from Kharkov, Ukraine. Like many towns in the former Soviet Union, it has a monument and an eternal flame dedicated to those who died during the war. To this day, she said, people still lay flowers there on May 9, August 23 (the anniversary of Kharkov’s liberation from the Nazis) and on wedding days and anniversaries. Wearing a small, silver cross around her neck, Borshchevskaya said there was no difference between Jewish and Christian veterans. “I am proud of them all,” she said.

The war in the Soviet Union was among the bloodiest that mankind has ever seen. Although Stalin knew that Adolf Hitler’s invasion was imminent, his army proved ill-equipped and ill-prepared to face the Nazis, who steamrollered across Eastern Europe in the summer of 1941, obliterating towns and villages in their wake. They laid siege to the northwestern city of Leningrad, where, over the course of the next two and a half years, more than 1.5 million people died of hunger and disease. They also quickly conquered the Baltic states, Belorussia and Ukraine, where mobile Nazi units, often aided by local groups, murdered an estimated 1.5 million Jews. Survivors were later sent to concentration camps from the ghettos.

The total Soviet death toll from the war was staggering: more than 20 million citizens, about one-third of all the casualties in the war combined. For this reason, the Great Patriotic War, as it is known in the former Soviet Union, is marked with a mixture of jubilation and solemnity, like July 4 and Yom HaShoah rolled into one.

“The most important thing,” said Levinson, 86, “is that you [and your descendants] never find out what war is like.”

That evening, most of the veterans were too tired to return to Oceana, where Rozenberg’s association had organized a commemorative dinner. But another 300 people, including veterans, Holocaust survivors and their relatives, gathered at tables in Oceana’s cavernous, dimly lit ballroom, straining to make themselves heard over booming Russian and Israeli music.

Rozenberg, a former colonel in the Red Army, was there, too, his jacket weighed down by rows of medals. “My leg was hurting,” he said, explaining why he had missed that morning’s meet-up and motioning to a war wound close to his knee. Rozenberg, who is 89, said that there are still about 3,000 Red Army veterans in New York, about half of whom are members of his organization. “Their average age is 85,” he said, “so it’s difficult for many of them to take part.”

Sitting nearby was Olga Henkin, an associate executive director of a Russian-Jewish youth organization called Ezra. Henkin’s volunteers had spent the previous day visiting the frailest veterans in their homes. They brought gift bags, she said, that included cookies, caviar and a certificate thanking each person for his contribution to the war. Henkin said it is easy for Americans to underestimate the importance that Victory Day holds for Jews from the former Soviet Union, where May 9 is a public holiday.

“I don’t believe there is a single family that doesn’t have someone who has been through that war,” said Henkin, 27. “Each family has been impacted in a personal and an emotional way, and that has been engraved somewhere in their mind and in their soul.”

After dinner, a handful of the most decorated veterans made their way, slowly, up a few steps and onto Oceana’s stage, their medals clinking as they walked. They stood under the spotlight for the next hour as a procession of dignitaries, including consuls from Ukraine and Israel, and members of the Russian-dominated Israeli political party Yisrael Beiteinu, paid tribute.

Toward the end of the ceremony, Elionor Eyzenberg, a representative of New York State Assemblyman Alec Brook-Krasny, walked onto the stage. Eyzenberg intended to present a certificate to each of the veterans, but when she came to the last name on her list, Semyon Pundik, she asked if someone in the room could accept the document on his behalf. Pundik, age 85, had died just a few days earlier.

Head bowed, eyes watering, Pundik’s son Alexander strode across the dance floor to collect his father’s prize, forming his own small, yet no less poignant, parade.

For Surviving Soviet Veterans, Victory Day Is a Dying Celebration