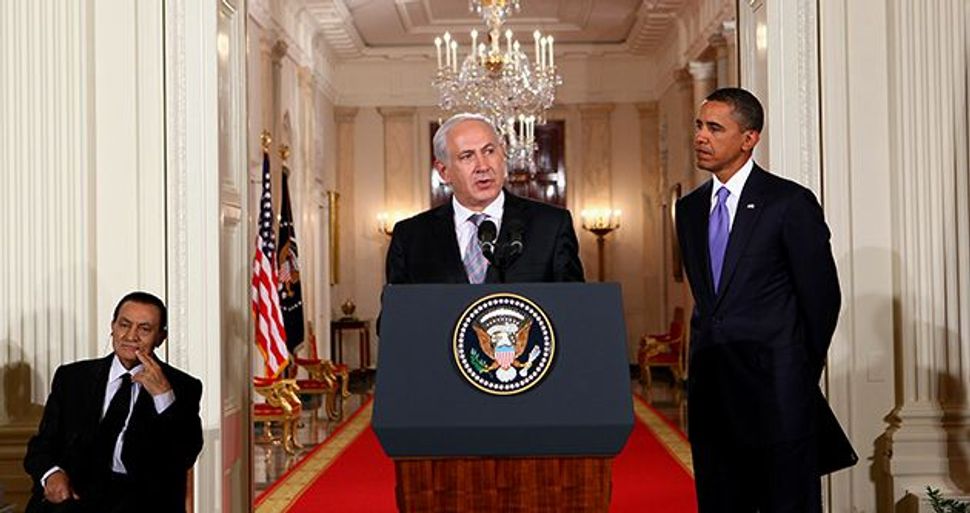 When Israeli Prime Minister Benjamin Netanyahu speaks to Congress on May 24, he will be appearing in front of some of his greatest fans in the United States. But his remarks will be addressing the Obama administration, a much more critical constituency.

It’s a dual audience whose diverse stances toward him are likely to impact his speech greatly. In his address Netanyahu is expected to use the strong backing he enjoys in Congress to counter the administration’s anticipation of a bold new approach to the Israeli-Palestinian conflict.

Even before his appearance, however, hopes for a landmark speech that would reshape peacemaking efforts have dimmed. The Israeli leader is increasingly focused on the threats that he sees in a new reconciliation agreement reached within the Palestinian camp between the ruling Fatah movement and Hamas, a group widely viewed as a terrorist organization that, though voicing a new, cautious interest in a two-state solution, refuses to recognize Israel’s right to exist. The prospects for a bold move on Netanyahu’s part, if such was ever in the works, are now on hold.

“He was poised to present some ideas that we hoped would help reanimate the now moribund peace process, but the pact [between Fatah and Hamas] has put us very far back,” said Michael Oren, Israel’s ambassador to the United States, in a May 6 phone briefing organized by the Jewish Federations of North America. “Nothing is certain at this point. It is a tremendous blow to the peace process.”

The Obama administration has been making clear in private channels that an Israeli step remains essential, both to ensure that the Palestinian issue does not overwhelm democratic movements now sprouting in the Arab world to help counter a drive by the Palestinian Authority under Fatah for a United Nations General Assembly resolution in September, recognizing Palestine as an independent state.

“The feeling is, we need to fight something with something, not with nothing,” said Scott Lasensky, a Middle East expert at the United States Institute of Peace. “That is why it is incumbent on the parties to come up with some kind of a plan.”

Netanyahu’s congressional speech has been described as a “Bar-Ilan II” address, referring to his August 14, 2009, speech at Bar-Ilan University, in which he made a historic turn and accepted the notion of a two-state solution for the Israeli-Palestinian conflict.

American expectations, according to a senior Israeli official who has been in close touch with the administration, are that Netanyahu now take another historic step and flesh out the idea by articulating the contours of a future settlement, including a territorial definition of a Palestinian state and a timetable for achieving an agreement.

“We have been hearing this message from everyone we speak to,” the official said. In an attempt to coordinate expectations, Netanyahu’s adviser, Yitzhak Molcho, held talks in Washington in April. Further discussions have been taking place through the diplomatic missions in Washington and Tel Aviv.

Netanyahu, according to both Israeli and American sources, has not offered any promise to deliver specific guidelines in his congressional speech. His advisers say the speech’s content is still under consideration.

But for Israel, any inclusion of Hamas before it accepts Israel’s right to exist, denounces terror and agrees to abide by existing agreements taints the entire P.A. and casts a doubt over future negotiations. “It is not a game changer, it is a game breaker,” Oren said.

Following the Palestinian unity agreement, and a statement by Hamas leader Ismail Haniya in which he condemned the killing of Osama bin Laden, Netanyahu has taken a harsh tone toward the P.A. and demanded that its leader, Mahmoud Abbas, make a clear choice between joining forces with Hamas and pursuing a peace process with Israel.

But experts following the issue warn that Netanyahu should not try to interpret recent developments on the Palestinian front as a free pass to come forth with bold peace moves.

“If he comes to Congress saying he is off the hook because of the Abbas-Hamas deal, then it would not be viewed as a good visit,” said David Makovsky, director of the Project on Middle East Peace Process at the Washington Institute for Near East Policy. According to Makovsky, Netanyahu must deliver a positive message, even if he does not believe it can be immediately implemented. He suggested that the Israeli leader declare his willingness to solve the conflict on the basis of the 1967 borders with land swaps, and that he condition this historic concession with a demand that Palestinians recognize Israel as a Jewish state.

The extent of Netanyahu’s willingness to offer a new horizon in his congressional address could also depend on another speech: that of President Obama. Although no date has been set, the president is soon expected to lay out his vision for the new Middle East following the series of uprisings in the Arab world. He will also touch on the Israeli- Palestinian conflict, although it is not clear at what level of detail. Some commentators have speculated that he will mention only the need for a two-state solution, while others believe that Obama could go as far as rolling out American parameters for a final-status agreement.

The administration, although clearly disturbed by the news of a Palestinian reconciliation deal that does not include Hamas’ recognition of Israel, is still concerned that lack of progress on the Palestinian front could negatively affect the move toward democracy in the Arab world. This stalemate, they fear, could be exploited by totalitarian regimes in the region or by extremists seeking to take power in those countries that have already overthrown dictatorships.

Another concern relates to a potential rift with Europe over dealing with Israel, as is already seen on the issue of the Palestinian unity pact. The administration has put forward a demand that any future Palestinian state recognize Israel. “As we have said many times, the United States strongly supports Palestinian reconciliation, but it must be on terms that support the cause of peace,” said Daniel Shapiro, Obama’s choice for America’s next ambassador to Israel, in a May 4 confirmation hearing by the Senate Foreign Relations Committee.

Europe, on the other hand, has taken a much softer approach and did not rule out engaging with a Palestinian government in which Hamas is represented. Foreign ministers of European Union nations are set to meet and discuss the Middle East Peace Process in late May, and Netanyahu’s speech is expected to set the tone for the meeting. A lack of clear initiative could lead to European support for the declaration of a Palestinian state when it reaches a U.N. vote in September.

Despite the administration’s sense of urgency, Netanyahu will find a welcoming atmosphere in Congress, his chosen venue for delivering the policy speech. The Israeli leader’s approach of pointing to the Palestinian reconciliation deal as the key obstacle to progress resonates well among lawmakers.

“President Abbas,” Democrat Rep. Gary Ackerman said, “now appears to be writing off his partnership with the United States.” And Ileana Ros-Lehtinen, the Republican chairwoman of the House Committee on Foreign Affairs, added, “By entering into this partnership with Hamas, Abu Mazen’s [Abbas’s nom de guerre] Palestinian leadership has shown again that it is not a partner for peace.”

The perceived gap between a supportive Congress and an increasingly impatient administration could eventually lead Netanyahu not to offer significant concessions in his May 24 speech. Daniel Levy, senior research fellow and co-director of the Middle East Task Force at the New America Foundation, said Congress has always been a “bastion of support” for Netanyahu, a fact that the Israeli prime minister has used to his benefit. “In this case, the guest, Netanyahu, feels he has greater freedom in Washington than the host, Obama,” Levy said.