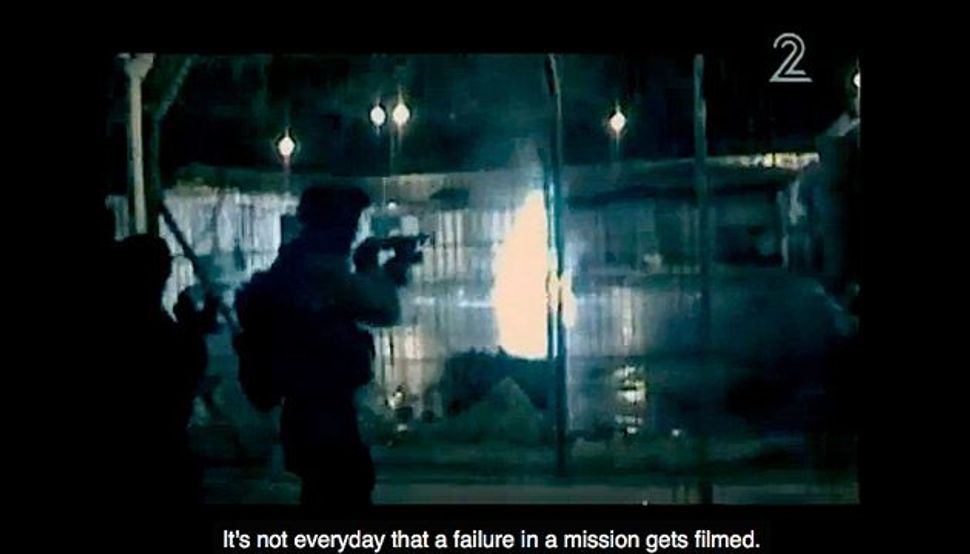 In Dead of Night: Israel Channel 2 aired footage in early April that the government had tried to keep secret of a post-midnight raid by Prison Service guards on sleeping Palestinian inmates at Ketziot Prison. The raid sparked a violent clash in which one prisoner died. Image by YouTube

In the video, there was screaming, cursing and shooting that left one prisoner dead. But when, in early April, Israelis were given a fly-on-the-wall view of one of the most violent nights in the history of their prison service, other media outlets met it with a collective shrug.

Those involved in monitoring Israel’s treatment of Palestinian security prisoners say this reflects a broader hardening of attitudes toward their treatment by the legal establishment and the general public.

In general, security prisoners’ cell blocks are “more relaxed than you would expect,” according to Leslie Sebba, a criminologist at the Hebrew University of Jerusalem who reports to the government biannually on the state of prisons. Even in the assessment of Anat Matar, head of the Israeli Committee for the Palestinian Prisoners, conditions are “by and large reasonable.”

But for several hours on the night in question, Masada shattered this calm. The operation, which official documents later showed took place in part to boost “morale and motivation” among Prison Service staff, led to a mass riot of some 1,000 prisoners and the death of Mohammed Ashkar, 29, from the northern West Bank. He died from head injuries a day later, while handcuffed to his bed at Soroka Medical Center, in Beersheba.

On April 7, Channel 2 aired footage from Masada’s video record of that night, which showed what a chaotic scene its raid had created. The station has not revealed how it obtained the footage.

Viewers could see the jail, silent as prisoners slept. Then, Masada operatives ran in, holding loaded weapons. Prisoners resisted, throwing unidentifiable objects; the operatives threatened tear gas if orders were not obeyed, and they shot ammunition — the nature of which has never been revealed — into prisoners’ tents in the dark. A prisoner injured in his leg is shown asking for medical attention but not receiving any and trying to treat himself. A wounded Ashkar is shown lying on the ground. The TV report said that Masada operatives deviated from plans to handcuff and search prisoners and extended the operation to wings of the prison that were not part of the plan.

The footage shown on-air was dramatic — all the more so because the authorities had tried hard to keep it secret. The Prison Service, with the backing of both the courts and successive public security ministers, blocked it from reaching the public, until they finally agreed in the Supreme Court, before the court ruled on the matter, to let it air. “These pictures, a whole system has tried for three years to hide them,” the Channel 2 narrator announced.

But for all the disturbing questions it raised, the piece received hardly a mention in the media beyond the televised report. Experts say that the video came as public concern about maltreatment of Palestinian prisoners — generally low — is particularly minimal following Hamas’s holding of Gilad Shalit for almost five years without allowing a Red Cross visit. “In general there’s a sense that justice has to be done — that they should be held in the same conditions that Shalit is being held,” Bar-Ilan University sociologist Avi Dawidowicz told the Forward.

The video had been the Holy Grail for the Ashkar’s family, offering them the chance to document how Ashkar was fatally injured. Smadar Ben-Natan, the family’s attorney, first became aware of its existence in 2008. Though she was granted access to most documents from a police investigation into the killing that recommended no charges be pressed, she received notification that the video was being withheld.

In September 2009, the Prison Service gave her 58 seconds of the video but refused to release more. In November 2010, she petitioned the Supreme Court to secure her access to the video. It was while this request was still pending that Channel 2 won the right to air the video, or, more precisely, 10 minutes of the video, which is actually several times longer. Ben-Natan regards the airing of the footage as important for transparency. But she is pessimistic that it will help her ongoing attempt to initiate the prosecution of the Prison Service officials who approved the operation. “I find it hard to believe that somebody will actually be prosecuted,” she told the Forward.

Ben-Natan based her view on the Israeli justice system’s track record in dealing with complaints from interrogations, which, in contrast to life in the main cellblocks, are reportedly sometimes tense and violent.

According to data provided by the state, more than 600 complaints of subjection to physical pressure by people under interrogation have been received since 2001. But all were closed by the attorney general without initiation of any criminal investigations — many of them on the advice of an assessor from Shin Bet, the body that conducts the interrogations. Internal Shin Bet investigations took place in some cases, but results of these are classified.

Critics say that though there has been a significant reduction in the use of force since 1999 high court ban, the fact that the attorney general can retroactively approve such force allows it to continue. “The legal culture is one of almost total impunity for law enforcement agents who deal with Palestinian security prisoners,” Ben-Natan said.

Legal experts doubt that the Israeli judiciary will act to reduce the use of force — or make those who use it more accountable — anytime soon. Hebrew University law professor David Kretzmer, author of the 2002 book “The Occupation of Justice: The Supreme Court of Israel and the Occupied Territories,” said that the legal establishment thinks that with the 1999 ruling it went “far enough.” He added, “It would seem that there is an institutional bias in favor of the security services.” Daphne Barak-Erez, chair of law and security at the Tel Aviv University law faculty, said that she does not expect to see a change in the law because current practices reflect where things have come to rest given “the different pressures in Israeli society, from security services and human rights organizations.”

Last February, the Association for Civil Rights in Israel, the Public Committee Against Torture in Israel and four other Israeli not-for-profit groups petitioned the high court, asking it to compel the attorney general to open criminal investigations in all claims of the use of force during interrogations. Hearings for this petition are due to begin in early 2012.