Raising Children on Kugel and Kimchi, and as Jews 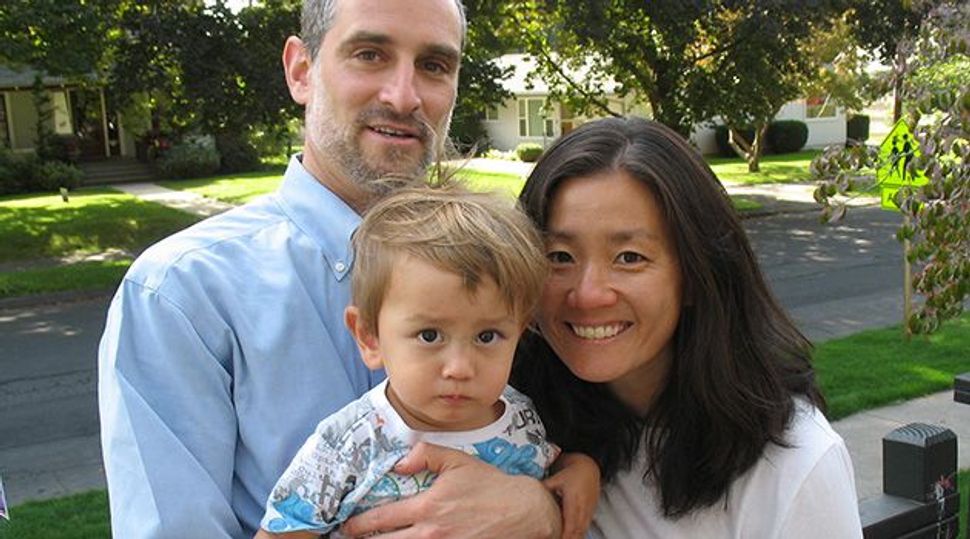 Keeping the Faith: Researchers Noah Leavitt and Helen Kim with their son, Ari. Image by COURTESY OF THE LEAVITT/KIM FAMILY

After her husband stepped on the glass, and she survived the chair dance at their wedding without falling off, Emily Brecher changed into a traditional red Chinese dress.

“Then my husband and I knelt down before my parents and my Jewish in-laws at the tea ceremony,” Brecher recalled. “The dim sum hors d’oeuvres were a huge hit.”

It’s an increasingly familiar story: Asian-Jewish weddings creating families that celebrate Rosh Hashanah and the Lunar New Year and bring up their children on kugel and kimchi.

But now there’s a surprising twist to the story: A new study suggests that, overwhelmingly, Asian-Jewish couples are raising their children Jewish. That’s what sociologists Noah Leavitt and Helen Kim found when they spent two years interviewing 37 Asian-Jewish couples in New York City, Philadelphia and California.

There are important caveats to their study. First and foremost, it is suggestive rather than conclusive. The small sample size was designed to allow each couple to be interviewed in great depth, making this a qualitative rather than a quantitative study. But nearly every couple interviewed displayed at least half of eight religious or cultural criteria the couple assembled as their index for measuring the depth and nature of a Jewish upbringing.

The researchers’ criteria included circumcision for boys; weekly family celebrations of the Sabbath, including such activities as baking, house decorating and having a formal Sabbath family meal; membership at a synagogue or participation in synagogue-based activities, and Hebrew school attendance.

That compares with the 2001 National Jewish Population Survey’s findings that around one-third of the children in households where only one of the two spouses is Jewish are being raised Jewish and/or with a Jewish identity.

The 37 couples, ranging from Reform to Orthodox in affiliation, were selected from among 300 couples that were contacted by a method known as “snowball sampling.” This approach, which is useful in assembling sample groups with attributes that are hard to find through random sampling, involves asking a core group with the desired characteristics to contact others with those attributes. In turn, members of the second group are asked to contact others, and the process goes onward, through several degrees of separation. This method helps researchers reach out to an increasingly diverse group of people with the desired attributes. But it is not the same as random sampling.

Nevertheless, bearing these limitations in mind, “Over and over again we saw Jewish-Asian couples making a commitment to helping their children become Jewish,” said Leavitt, visiting assistant professor of sociology and general studies at Whitman College in Walla Walla, Wash. “In fact, these households were stronger into Judaism and the sense of their kids’ Jewishness and upbringing than most Jewish families in the U.S.”

Leavitt and Kim’s study will be a chapter in a forthcoming peer-reviewed book with the working title, “Keeping the Faith,” from NYU Press, looking at religious practices of second generation Asian-American and Latino immigrants in the United States.

Leavitt and Kim, who are married, spent hundreds of hours talking to the couples, who had responded to lengthy questionnaires. While most of the Jews were Ashkenazi, the Asians were Korean, Chinese, Filipino, Japanese, and Southeast and South Asian. A few of the couples had married so long ago that their marriages broke state anti-miscegenation laws, declared unconstitutional in 1967. Others were still in graduate school. The study comprised both straight and same-sex partners. Most, but not all, of the couples had children.

The researchers didn’t study why most couples were raising their children Jewish. They hypothesize, however, that the Jewish community provides a “wraparound” for family life in many cities, making it easy to promote Jewish identity anywhere, from preschools, summer camps and community centers to social service agencies, museums and political organizations.

That’s not the case with most Asian communities, and this is due in part to dispersion of many Asian Americans into the suburbs. As a Jewish woman in California married to a Japanese man told Kim, the lack of continuing emigration from Japan provides “very little way that we could possibly raise our kids in Japanese culture. Jews — there’s like a million synagogues here. There’s not a Japanese community in hardly any city in America now.” In the San Francisco Bay Area, on the other hand, an Asian-American man noted that his family could pick the Oakland version of the Jewish community — or the Berkeley or El Cerrito version.

The researchers were surprised to find little parental opposition to the marriages. “I was expecting a lot more, ‘You can’t marry her, because she’s not Jewish or not Korean,’” said Kim, who attributes the lack of resistance to the modern social trend of increasing intermarriage.

Perhaps less surprising, the researchers also found the Asian-Jewish couples sharing remarkably similar values. As Brecher put it: “My husband and I found that the Jewish and Chinese cultures are very similar — the emphasis on family life, the importance placed on education, strong work ethics. And of course, we show our love through food.”

Many couples noted that their harmonious values stemmed from similarities in Jewish and Asian culture, and some even mentioned that Confucian or Buddhist teachings paralleled those of Judaism.

“My children recognize themselves as Jewish children of the Chinese mother,” Brecher said.

The alignment of Jewish and Asian values may also be one reason for the researchers’ finding that the overwhelming majority of the couples they interviewed were happy.

Of course, this didn’t prove that all couples in Asian-Jewish marriages are content. Couples who weren’t getting along, Leavitt says, were unlikely to respond to their survey.

But those who did respond “expressed so much deep love and affection and trust and confidence and support of their children,” Leavitt said, “that when we finished interviewing, Helen and I felt more loving toward each other.”

Raising Children on Kugel and Kimchi, and as Jews