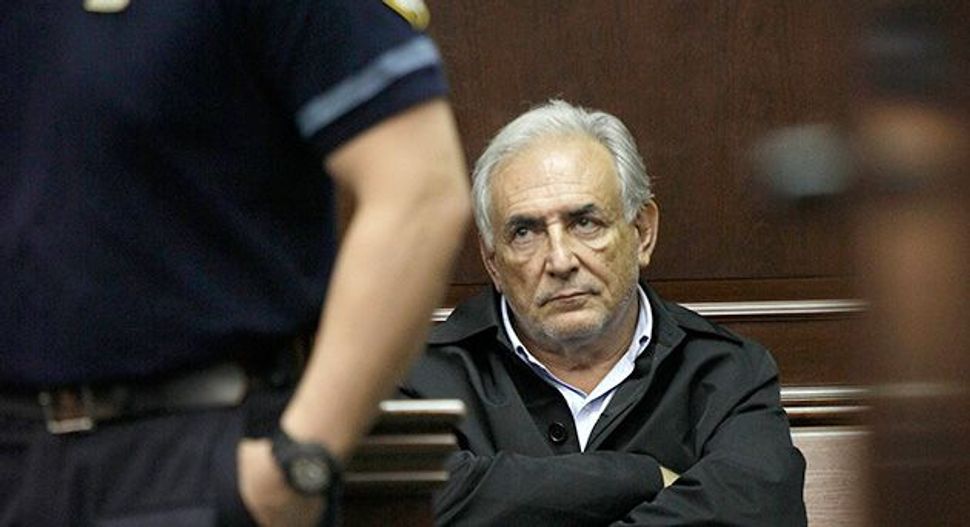 Update: On May 18, Dominique Strauss-Kahn resigned his position as managing director of the International Monetary Fund. On May 19, he was released on bail.

PARIS — Just weeks ago, Dominique Strauss-Kahn worried aloud that his Jewish identity would be exploited during France’s upcoming presidential campaign.

In what were to have been off-the-record meetings with writers and editors of the French newspaper Libération and the newsmagazine Marianne, Strauss-Kahn in late April cited money, women — he had admitted to a 2008 extramarital affair with a subordinate at the International Monetary Fund — and his Jewish identity as the issues his political opponents were most likely to seize on as the election season got under way.

During those meetings, he wondered if an old statement he made to a French Jewish newspaper would come back to haunt him. In 2003, he told Tribune Juive that he wakes up every morning wondering how he could be useful to Israel — a remark he now calls a “stupidity.”

As it turns out, though, Judaism is the least of Strauss-Kahn’s problems.

The 62-year-old IMF chief who seemed poised to become France’s first Jewish president next year is now facing the possibility of decades behind bars instead of a five-year presidential term.

His fortunes changed on May 14, when the former French finance minister was taken into custody in New York, just before his plane was to depart for Paris. The following day, he was charged with the sexual assault, attempted rape and unlawful imprisonment of a chambermaid in the posh New York hotel suite where he was staying. He was denied bail and, at press time, was being held at New York’s Rikers Island jail complex.

Up until his arrest, Strauss-Kahn’s emergence as a leading presidential candidate in a nation with a long history of anti-Semitism was widely viewed as a sign of Jewish acceptance in France. Even the far-right National Front Party has largely abandoned its anti-Jewish rhetoric, while continuing to make charged statements about Muslims.

Although France has had Jewish prime ministers before — Léon Blum in the 1930s, and Pierre Mendès-France in the 1950s — it has never had a Jewish president, who has much broader governing powers than even the president of the United States. Like all politicians in this staunchly secular country, Strauss-Kahn, who is widely known as DSK, rarely spoke of his religious beliefs. But unlike a number of his Jewish colleagues, he has always been open about his faith and his support for Israel.

“Unlike Blum or Mendès-France, who exercised a kind of self-censorship on their Judaism, we had, for the first time in French modern history, a conscious, declared and self-assumed Jew… in a position to win the presidency,” said Patrick Klugman, a member of Strauss-Kahn’s Socialist Party and a former head of France’s Jewish student association. “While some quarters of the Jewish community feared that this could have negative repercussions on Jews if he was to fail or to do wrong, the polls [prior to his arrest] were crystal-clear: There was no Jewish problem with DSK.”

Strauss-Kahn’s own concerns about anti-Semitism may have stemmed from a controversy in February over comments made by Christian Jacob, of the center-right U.M.P. Party. Jacob said in a radio interview that Strauss-Kahn did not embody “the image of France, the image of rural France to which I am attached.” One Socialist Party lawmaker, Jean-Christophe Cambadélis, said that such remarks were a way of “implying that he is a foreigner, a stateless member of the ‘party from abroad’ or alas something else” — a transparent reference to his Jewishness.

But Jacob’s statement did nothing to dent Strauss-Kahn’s popularity. In recent weeks, polls showed that Strauss-Kahn was favored to beat President Nicolas Sarkozy, of U.M.P., in the general election.

The only child of an Alsatian father and a Tunisian mother, Strauss-Kahn was raised in a secular, progressive environment in France and in Morocco. Although he celebrated his bar mitzvah, he ultimately seemed to distance himself from Judaism; his first and second wives were not Jewish. However, he has said that the Six Day War in 1967 helped revive his Jewish identity. And following two divorces, he married American-born Jewish journalist Anne Sinclair, who, according to a recently published biography, “made him more Jewish.” An Orthodox rabbi officiated at their 1991 union in Sarcelles, a middle-class Paris suburb that is home to many Jews of North African descent, as well as to many Arab-Muslim residents. It was in Sarcelles that Strauss-Kahn established his political base in the late 1980s, serving as a lawmaker before going on to become a government minister.

With the help of Sarkozy, Strauss-Kahn was named managing director of the IMF in 2007. This was initially seen as a savvy move by Sarkozy to eliminate a potential rival by sending him to a dormant institution in Washington. But in the wake of the global financial meltdown, Strauss-Kahn’s profile has risen as he earned kudos for pushing the organization to adopt more progressive policies and to forgo the stringent austerity packages it imposed in many countries.

It wasn’t Strauss-Kahn’s Judaism, but the other two issues he articulated concerns about during the Libération and Marianne conversations that would ultimately turn out to be much bigger problems for him.

In late April, Strauss-Kahn and his wife were photographed getting into a Porsche. Days later, reports surfaced about the IMF chief’s penchant for suits by a high-end Washington-based tailor. His media advisers quickly countered that he was merely getting into a friend’s car, and they threatened to sue the media outlets that published articles about his tailored suits.

Though Sarkozy has been criticized for his ostentatious ways — earning the nickname “bling-bling president” — in a meeting with fellow party lawmakers last year, he reportedly boasted that in comparison with Strauss-Kahn, he behaves like a “Methodist pastor.” And since Strauss-Kahn’s arrest, the president told members of his party that he had warned Strauss-Kahn when he was appointed IMF chief to watch his personal behavior.

Indeed, some supporters of the IMF chief hold out the possibility that the New York scandal could be a setup by Sarkozy supporters. During his recent meeting at Libération, Strauss-Kahn offered up a startling example of the types of tactics to which his political rivals might resort.

“Imagine that a woman would be paid 500,000 or a million euros to claim that I had raped her in a parking lot,” Libération quoted him as saying. (Libération and Marianne opened up about the content of their late April conversations with Strauss-Kahn, following the politician’s arrest.)

But the sex scandal that political observers say will probably end Strauss-Kahn’s political career is not likely to have a negative impact on the French-Jewish community. “But it will certainly give succor to those in the community who believe it is better to stay away from politics because Jews inevitably end up paying the price,” Klugman said. “And that’s just sad.”