Obama Seeks To Reassure AIPAC on Basis for Peace 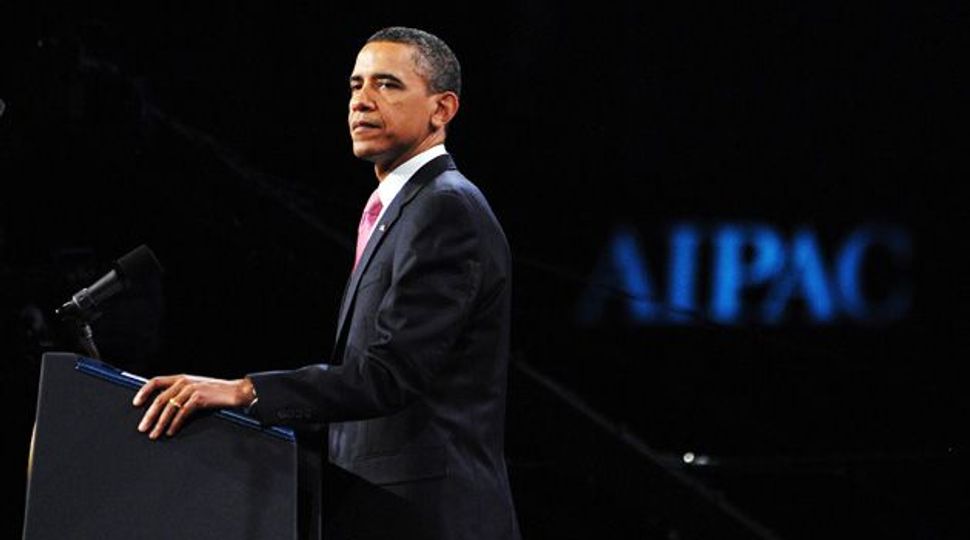 Holding Firm: President Obama addressed the American Israel Public Affairs Committee on Sunday in Washington. There he sought to reassure the pro-Israel community after his recent endorsement of the 1967 borders as the basis for an Israeli ? Palestinian peace agreement. Image by getty images

After causing a stir by endorsing the 1967 borders as the basis for an Israeli–Palestinian peace agreement, President Obama on Sunday sought to reassure the pro-Israel community about his views regarding the future borders.

In a speech, which at times received lengthy applause and at other times was met with silence, Obama provided clarifications to his May 19 policy statement about the 1967 borders, making clear that he believes the final line should be a result of negotiations that take into considerations the changed realities on the ground and Israel’s security needs.

Obama acknowledged that by setting criteria for solving territorial disputes between Israel and the Palestinians he was stepping into a political minefield, but stressed the statement was necessary. “I know that stating these principles — on the issues of territory and security — generated some controversy over the past few days. I was not entirely surprised,” Obama told the audience of about 10,000 at the annual policy conference of the American Israel Public Affairs Committee. “I know very well that the easy thing to do, particularly for a president preparing for re-election, is to avoid any controversy. But as I said to Prime Minister Netanyahu, I believe that the current situation in the Middle East does not allow for procrastination.”

The president argued that his message had been “misrepresented” since “there was nothing particularly original in my proposal; this basic framework for negotiations has long been the basis for discussions among the parties, including previous U.S. Administrations.”

Obama did not retract his endorsement of the 1967 borders nor did he soften his message regarding the urgency of moving toward a settlement of the conflict. But he did expand on the parameters of the border issue, providing Israel and its supporters in the U.S. with details that, to a certain extent, address concerns raised by Israeli Prime Minister Benjamin Netanyahu in his May 20 meeting with Obama.

“Let me reaffirm what ‘1967 lines with mutually agreed swaps’ means,” Obama told the crowd at the Washington Convention Center. “By definition, it means that the parties themselves – Israelis and Palestinians – will negotiate a border that is different than the one that existed on June 4, 1967. It is a well-known formula to all who have worked on this issue for a generation. It allows the parties themselves to account for the changes that have taken place over the last 44 years, including the new demographic realities on the ground and the needs of both sides.”

Obama’s recognition of “new demographics” echoes a promise given by former president George W. Bush in 2004 to then Israeli leader Ariel Sharon, which stated America’s support for keeping Jewish settlement blocs in the West Bank as part of a land swap agreement with Palestinians.

The audience, made up of AIPAC delegates from across the nation as well as many student activists, responded politely, but with little enthusiasm, to Obama’s explanation of his 1967 remarks. But when speaking of America’s friendship with Israel and when pointing out his administration’s demands from the Palestinian side, the president won repeated standing ovations. Obama made clear he will work to block a Palestinian drive for statehood recognition at the United Nations General Assembly in September and sharpened his message opposing the Palestinian national unity government that includes Hamas. “No country can be expected to negotiate with a terrorist organization sworn to its destruction. We will continue to demand that Hamas accept the basic responsibilities of peace: recognizing Israel’s right to exist, rejecting violence, and adhering to all existing agreements,” Obama said.

In his address, Obama sought not only to reassure the pro-Israel community but also to quell the political thunderstorm created by his May 19 speech. Republican politicians had accused Obama of abandoning Israel, and several Jewish Democratic lawmakers also issued statements arguing the president’s endorsement of the 1967 lines was a mistake.

David Harris, president and CEO of the National Jewish Democratic Council, said he believed Obama’s speech at AIPAC provided adequate answers to his critics. “He helped himself tremendously,” Harris said. The Democratic House minority whip, Steny Hoyer, demonstrated the distance Democrats wished to keep from the president in a speech that preceded Obama’s address to the lobby. Hoyer, to the cheers of the AIPAC crowd, said Israel’s borders “must be defensible” a statement seen as referring to Netanyahu’s claim that the Obama definition of future borders leaves Israel “indefensible.”

New York Democrat Eliot Engel, a hawk on issues relating to Israel, told the Forward after Obama’s speech that he still would like to see the president avoid airing differences with Israel in public. “The dirty laundry should be discussed privately between the leaders,” Engel said.

Obama Seeks To Reassure AIPAC on Basis for Peace