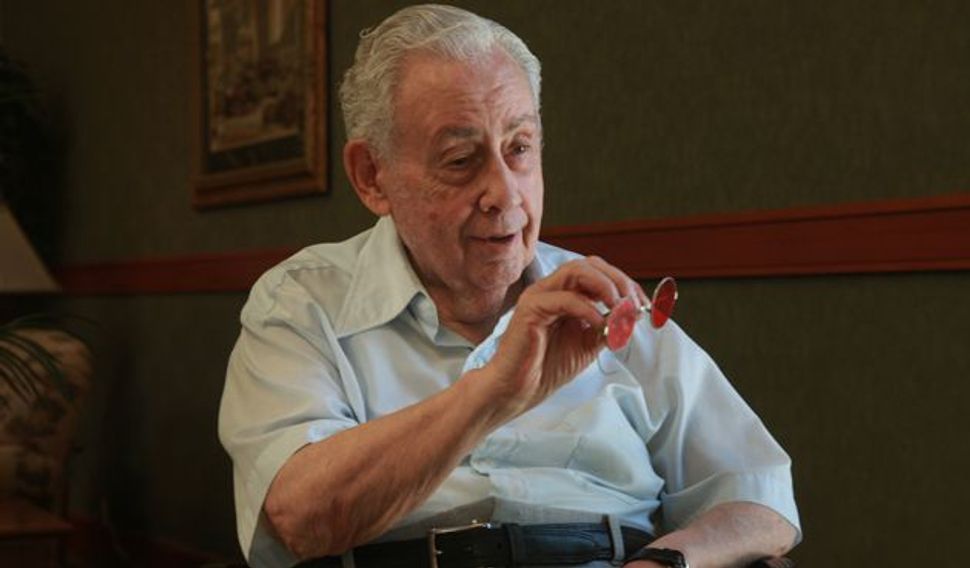 Hero: Jerome ?Jack? Bluestein, one of the 550,000 Jews who served in the U.S. military in World War II, is part of the Veterans History Project, which is chronicling the stories of the former soldiers. Image by www.earldotter.com

As we sit in a music classroom in an independent-assisted living facility in Silver Spring, Md., Jerome “Jack” Bluestein and I talk about Hitler. Or, more specifically, about the “Adolf Hitler” photo album that Bluestein has kept with him for the past 60-plus years. The book was known as a cigarette photo album because it included photos that were on cards that had been included in cigarette packs. Bluestein, 84, a former unofficial German interpreter and World War II Army infantryman, can’t remember exactly where or when he acquired the book — sometime during his tour of duty with Patton’s 10th Armored Division — but he does know he now wants to be rid of it.

“I want to donate it, preferably to the Holocaust Museum,” he says.

Perhaps because I had never given much thought to why an old soldier might hold on to the remnants of war, or perhaps because I have Memorial Day in mind and I am feeling a twinge of hero worship, I am awed at the types of memorabilia Bluestein shows me: a German handbook for soldiers, with the name of the book’s owner printed neatly at the top; red-tinted Wehrmacht sunglasses; a leather holster; a copy of “Mein Kampf.” I’m more astonished that he has kept these with him all these decades, while moving to various postings in the Foreign Service.

“I’m a collector,” he says, shrugging and smiling.

Bluestein is dispassionate not only when talking about his collection, but also when describing how he clenched his teeth as bullets whizzed around him and while crawling “hand over leg” across a bridge over the Kyll and Moselle rivers. Yet he has a glint in his eyes when he tells me that, as one of the smallest men in the unit, he had to sleep in a crib in one abandoned German house. Listening to Bluestein talk about what happened to him on “that terrible day,” in April 1945, when four of the six men from his basic training group were killed in Trier, France, I am struck not only by his straightforward tone, but also by the realization that I am again smitten — just as I have been with Bernie, Harvey, Murray, Len and the other Jewish World War II vets I’ve been interviewing for the past three years.

The depth of my affection for these guys, who number among the 550,000-strong cohort of Jews who served during WWII — out of 16 million Americans in total — would probably surprise and not necessarily delight them. It has also surprised me, a baby boomer who once sang “Give Peace a Chance” as loudly and self-righteously as anyone else in the crowd during the 1969 Moratorium March on Washington.

Yet the reason for my fascination with these men probably doesn’t have as much to do with either war or peace as it does with childhood — and with being captivated by my father’s wartime tales of the South Pacific, almost from the time I could hum, “I’m Gonna Wash that Man Right Outta My Hair.”

Decades later, after hearing about the Library of Congress’s Veterans History Project, I interviewed Dad about his WWII experience and was subsequently drawn to other Jewish WWII vets who wanted to contribute or had already contributed their stories to the VHP.

Fortified by such stalwart resources as Deborah Dash Moore’s “GI Jews: How World War II Changed a Generation,” and “Ours To Fight For: American Jewish Voices From the Second World War,” by Bonnie Gurewitsch and William O’Neill, I began spending Sundays in retirement-community party rooms or senior-adult apartments to learn how these former soldiers had juggled their dual identities and went on to live their lives as Jews and Americans.

Consistent with Dash Moore’s findings, the guys I met didn’t know the full extent of the Holocaust until after the war. But what I was surprised to find was that almost all of them downplayed any anti-Semitism they had experienced.

Here in the music room, Bluestein first says that he didn’t encounter anti-Semitism, but then says he does remember “one thing.” He recounts how, the first night in the barracks, one of the “crackers” said, “I’d like to get me some of these draft-dodging Jews.” And, “You don’t have to worry about Jews going overseas, because Jews don’t fight.”

Bluestein says he kept quiet, but that later, after people learned he was Jewish, “nobody made those remarks in my presence.”

Despite standing just above 5 feet tall, Bluestein, a former high school classmate of Mel Brooks, has the type of self-contained bearing that still commands respect. He was part of the unit that liberated the Landsberg work camp, although not one of the actual liberators.

Bluestein tells me that if he’d known that the Jews were being systematically murdered, he might have been “considerably colder” to the Germans he encountered.

“He’s carried the war with him, for better or worse,” my psychologist husband, Charlie, remarked when I told him about Bluestein’s cache of paraphernalia, “both physically and emotionally.” Whether with Army pamphlets or sniper rifles, Bluestein and the other vets I’ve met seem to have kept their war with them. But Bluestein, for one, seems ready to divest.

Figuring the least I can do is contribute to his removal-of-the-war effort, I will offer to come back to transport two of his most noxious artifacts to a friend who works at the United States Holocaust Memorial Museum. Before handing over “Adolf Hitler” and “Mein Kampf,” Bluestein will buy me a cup of coffee and we will sit, chatting like old friends.

But back here in the music classroom, we are still getting to know each other. When I express admiration for his multiple language skills, Bluestein says he hasn’t forgotten the German he was tasked with repeating during the war.

“I can still say, ‘You have 30 minutes to get out of the house,’ Bluestein says, with a hint of late adolescent bravado in his Brooklyn-tinged voice. “Do you want to hear it?”

Marla Brown Fogelman is a freelance writer living in Maryland. She is currently working on a book about her experience interviewing American Jewish veterans of World War II.