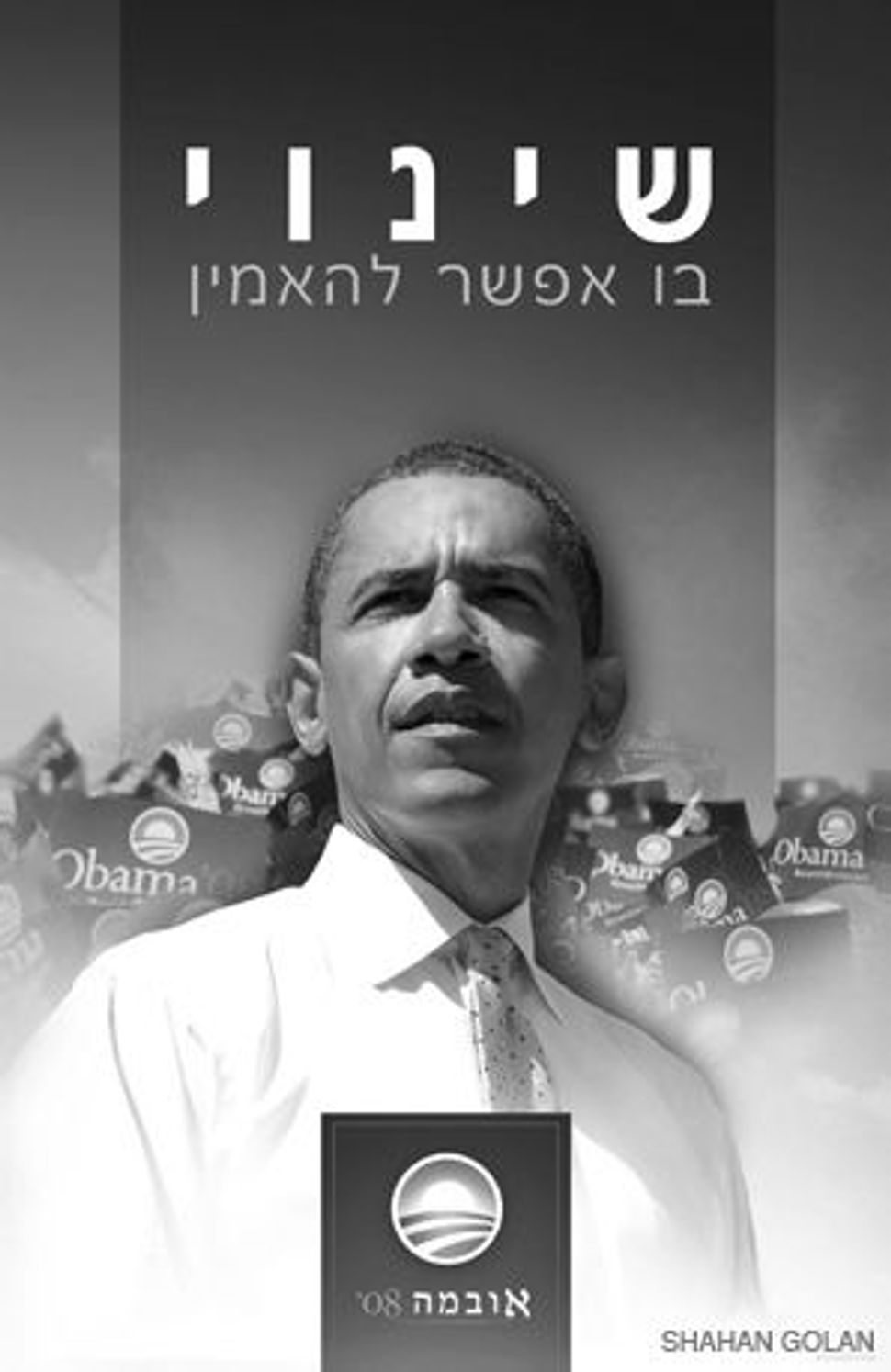 CAMPAIGNING ABROAD: An Israeli leftist created the poster above in an effort to win more support for Obama in Israel.

Haifa, Israel – Of all the stops on Barack Obama’s upcoming swing through Europe and the Middle East, it is his visit to Israel that has received the most attention, but not because of his popularity here. 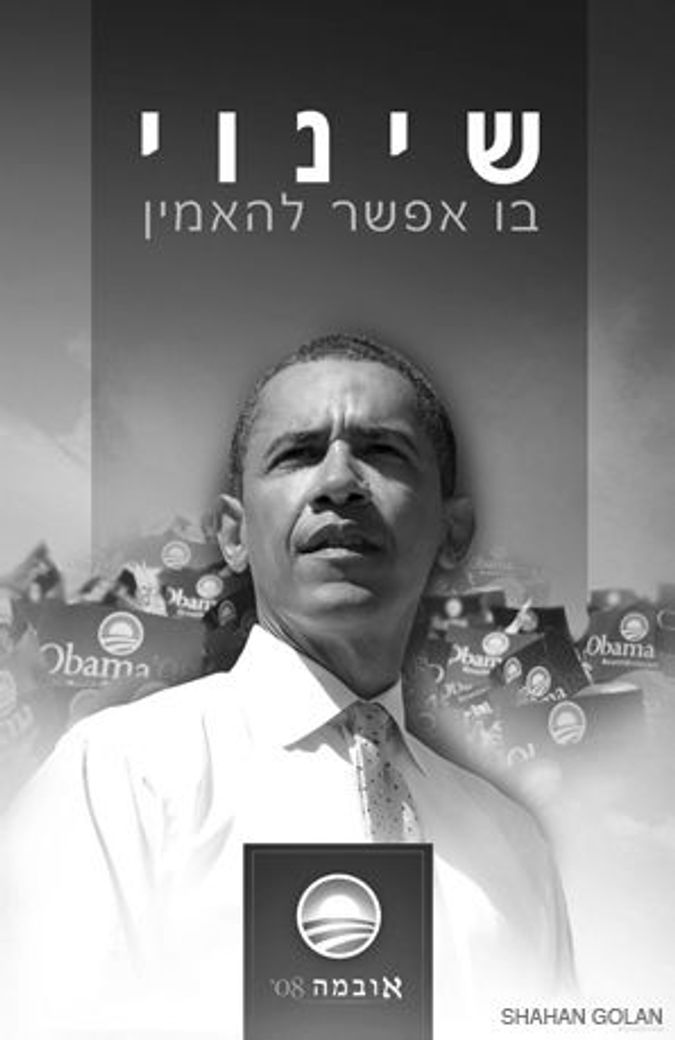 CAMPAIGNING ABROAD: An Israeli leftist created the poster above in an effort to win more support for Obama in Israel.

Polls indicate that Israelis evince some of the lowest levels of support for Obama of any country in the world. In France and Germany, both stops on Obama’s tour, respectively 65% and 67% of the population has said that they would vote for him if they could. By contrast, in Israel, where he is due for 24 hours on July 22 to July 23, only 27% of the respondents said that they would like to see him become president, with John McCain being the preferred choice of 36%, according to a poll published at the end of June in the right-leaning Makor Rishon newspaper.

In the United States, Obama’s friendliness toward the Jewish state has been a matter of fierce debate, with gallons of ink being spilled on the Illinois senator’s approach to Iran and Syria. Despite this, the most recent polls suggest that he would still win nearly two-thirds of the Jewish vote.

But in Israel, observers say that the doubts expressed about Obama in the United States have been magnified.

“There is a certain amount of anxiety about his positions and exactly how he would behave as president,” admitted Hillel Schenker, vice chair of Democrats Abroad-Israel.

Pointing to McCain’s declaration last April that he will be “Hamas’s worst nightmare,” American-Israeli relations expert Dan Diker said, “They [Israelis] know and understand McCain’s positions.” By contrast, “Obama’s are surrounded with uncertainty.”

Experts point out that things would be very different if antipathy toward Obama were limited to his natural opponents on Israeli’s right wing, leaving the left wing — as one may expect it to be — broadly supportive. But he suffers because the concerns about him appear, in many instances, to transcend right-left divisions.

Joshua Teitelbaum, senior research fellow at the Tel Aviv-based Moshe Dayan Center for Middle Eastern Studies, said, “You will see many more people on the center-left in Israel favoring McCain, because politics here is very single-issue: People formulate their opinions on the basis of the Arab-Israeli conflict.”

Obama’s trip will take him through many of the familiar stops for American politicians in the Holy Land, with stops at the Western Wall, the besieged city of Sderot and governmental offices, along with a more controversial trip to the Palestinian city of Ramallah. There appears to be little question that at all stops, his hosts will go to great lengths to make a good impression, said Michael Oren, a senior fellow at the hawkish Shalem Center in Jerusalem who has just written a journal article on attitudes of Israeli policymakers toward Obama and McCain.

But while there will be smiles all around, the main political parties all share fears about Obama, Oren said. The primary concern is that the dialogue with Iran, which Obama has proposed, will be used by its president, Mahmoud Ahmadinejad, “as camouflage for nuclear enrichment,” according to Oren.

Cameron Brown, deputy director of the Global Research in International Affairs Center, which is part of Herzliya’s Interdisciplinary Center, said that, 10 years ago, Obama’s approach to Iran and Syria would have gone down well across the Israeli left, “but the political spectrum has undergone a massive change, with even the left feeling that it has been burned by, and is more cautious to, this type of thing.”

One other obvious area of tension is building projects in the Palestinian territories, which currently takes place with the backing of a coalition that includes the Labor Party. If Likud heads the next coalition and such projects are expanded, there could be actual “confrontation with the U.S. administration,” said Gershon Baskin, founder and director of the Israel/Palestine Center for Research and Information.

Baskin said he regards the election of Obama as “essential for Israel,” but he also said that the majority of Israelis will never agree with him. “He doesn’t have the knee-jerk reaction of using force to fix everything, which is a widespread Israeli position on much of the left as well as the right,” Baskin said.

Indeed, many Obama supporters are expressing concern about the fellow travelers. Onem Rehovot-based graphic designer Shahar Golan has even started a grass-roots campaign to challenge the antipathy toward Obama by designing a Hebrew-language poster in his support and asking businesses and members of the public to display it.

Golan, Israeli born and not a voter in the United States, told the Forward, “I am doing this because I believe that Obama can make the U.S. — and the world, especially the Middle East — a better place but many Israelis don’t see that as of yet.”

For all the areas of concern, nobody expects them to be addressed in the upcoming visit. Well aware that “two or three words out of place, and it’s not difficult to conceive that he could make it difficult for himself electorally,” Obama will “do his utmost best to stay on straightforward consensus issues,” said Jonathan Rynhold, research associate at Bar Ilan University’s Begin-Sadat Center for Strategic Studies.