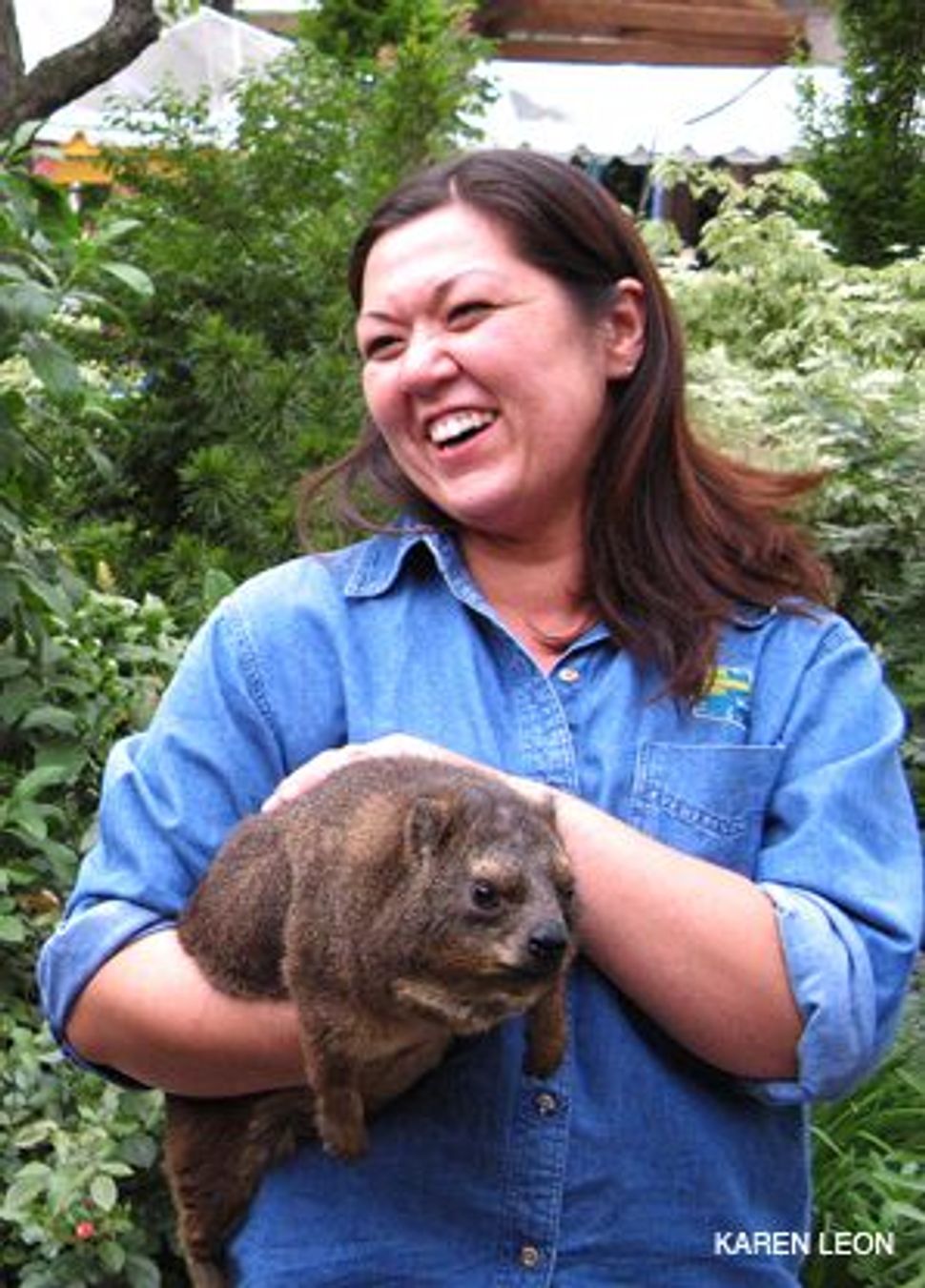 TREYF: A zoo handler brought out a hyrax for the Wildlife Conservation event. 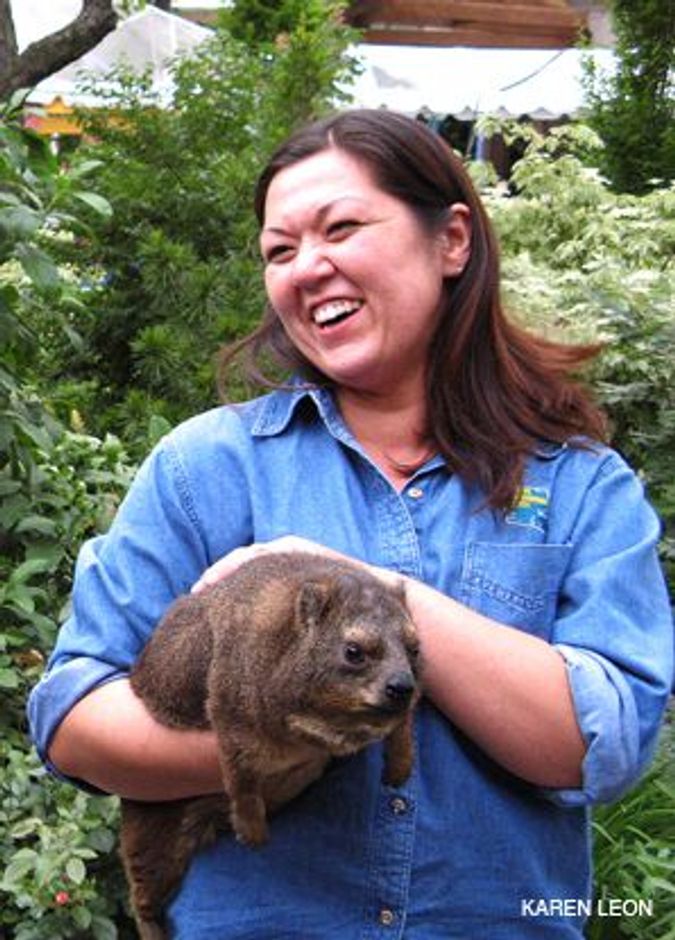 TREYF: A zoo handler brought out a hyrax for the Wildlife Conservation event.

The Wildlife Conservation Society’s June 3 “Safari! India” gala to save the Indian tiger, held at the Central Park Zoo, honored David Schiff, its longtime board member and chairman (1990-2001). A managing partner at the investment bank Kuhn, Loeb & Co., Schiff is the grandson of American Jewish financier Jacob Schiff (1847-1920), one of the founders of WCS predecessor the New York Zoological Society. The event’s honorary chairs were former vice president Al Gore and his wife, Tipper Gore (the Gores’ daughter Karena Gore-Schiff is married to Dr. Drew Schiff, the honoree’s son), and trumpeter extraordinaire Wynton Marsalis. I told David Schiff that I indirectly owe my life to his grandfather. Jacob Schiff was so outraged by the 1903 Kishinev pogrom (which Tsar Nichola II condoned), that after meeting Baron Kerekio Takahashi in 1904 in London, he helped raise international loans that enabled the Japanese to defeat Russia in 1905. Schiff became a national hero in Japan. This may, in part, have prompted the Japanese government in 1940 to 1941 to accept the 2,139 “illegal” visas issued by Chiune Sugihara, then Japanese consul in Kovno, Lithuania, for 6,000 refugees (including my mother and me) who found a haven in Japan. Chatting with the Gores, I recalled the 1987 Washington, D.C., party hosted by Abbington Press for Tipper Gore’s book “Raising PG Kids in an X-Rated Society”: The hotel room had been transformed into an old-fashioned soda fountain with the Gore family — parents and children — acting as “soda jerks,” dispensing ice cream cones topped with sprinkles, chocolate chips and whipped cream.

At the gala, the background music was Indian and the cuisine was Indian inspired. Amid the 650 black-tie and designer-gowned guests was a sprinkling of stunning sari-clad women. In addition to the Gore and Schiff family members, socially prominent minglers around the zoo’s Seal Pool included Leonard Stern (of Hartz Mountain provenance), Georgette Mosbacher, Jane Alexander, Muffie Potter Aston, Cindy Adams and Ullas Karanth, director of WCS in India and winner of the 2007 J. Paul Getty Award for Conservation Leadership for his fight to save the Indian tiger. Delightful distractions included several “pettable” wild animals held by their zoo handlers: a desert fox, a lizard, “Olivia” the quail and a small, furry hyrax (a distant relative of the elephant)!

WCS literature notes: “Since l985, the Wildlife Conservation Society (WCS) has worked to save wildlife and wild lands around the globe.… Today WCS has field staff at work in over 60 nations, protecting many of the last wild places on our planet.” New York zoo lovers will be delighted to learn that the Bronx Zoo-based WCS is “distinguished as the only global conservation organization that also operates the world’s largest system of urban wildlife parks, educating more than 4 million zoo and aquarium visitors each year about the importance of wildlife conservation.”

SOSÚA: DOMINICAN HAVEN FOR JEWS DURING WORLD WAR II “Hitler saw us as the scum of the earth. Rafael Trujillo, a dictator responsible for the deaths of thousands, saw us as a super race,” said Ruth Arnold Kohn, guest speaker at June 12 Women’s benefit luncheon held at the Museum of Jewish Heritage-A Living Memorial to the Holocaust. In 1938, when most of the world’s nations were unwilling to help the Jews, the Dominican Republic offered to resettle 100,000 refugees in Sosúa, an abandoned plantation that became a refuge to hundreds of Jews. In fact, Kohn and her family survived there. Now a town, it still thrives today. Kohn, a feisty 81-year-old, held the 300 guests at the Pierre Hotel spellbound. “The settlers were middle-class Europeans, businessmen who had never seen a fruit or vegetable in the ground. Asked if they knew how to farm, they lied and did it! We learned to make cheese, which was sold all over the country; we celebrated Jewish holidays; there was a Yiddish theater, a choir.… There was malaria, and we had to check for tarantulas under our sheets…. There were 100 babies born at Sosúa, and only one infection! Though there was jaundice, no one working in the hospital got jaundice…. My father, a doctor, refused to charge the Dominicans: ‘They saved us.’ There was no antisemitism in the country. There were too few girls, so many of the men married Dominican women. My husband waited six years to marry me.” She elaborated on how ruthless Trujillo had no qualms about killing: “If a landowner refused to give his land to Trujillo, his widow would give it to him.” She paused. “Trujillo helped build the synagogue.” “My parents did not want to leave Sosúa. They had friends, loved the siesta, got used to the tropics. Could not survive the winter… you do not transplant an old tree. At the cemetery there is a beautiful place. They lived together. They are buried together.… My granddaughter wrote the Dominican people… about ‘my grandma and grandpa’ at Sosúa. My memories will be her memories. That is what life is all about — memories… I always wear the Dominican and American flags. I had no citizenship and [thanks to Sosúa] finally I was a person.”

As a 6-year-old attending school in Berlin, Kohn recalled that until 1933 she did not remember any antisemitism. “My father, an Orthodox Jew, who earned the Iron Cross from World War I, said, ‘I will never leave Germany!’” Kohn said. “Released from Dachau after five payment installments, he left on the last train from Germany.” Kohn recalled Berlin’s Orianenburg Synagogue, “The windows in flames, they threw the Torahs into the fire.… [Now] every time I see them opening the temple ark to take out the Torahs, I see them in flames.”

To fully relish the remarkable Sosúa experience, do not miss the museum’s eye-opening Sosúa exhibit. As David Marwell, the museum’s director, told the luncheon guests: “I will wager that few, if any, in this room knew about Sosúa before we focused your attention on it. This is a story worth telling at any time, but certainly needed to be told while those who lived it were still with us to share their memories.” Ann Oster and Patti Kenner chaired the event. Noting a few hats in the room, hart-wearing Kenner suggested that at next year’s luncheon, “you ladies should come in hats.” The exhibit, Sosúa: A Refuge for Jews in the Dominican Republic, closes on August 10. Hurry — do not miss it!

ELEM – YOUTH IN DISTRESS IN ISRAEL BENEFIT AT JEWISH MUSEUM

“I like that, but I have a carbohydrate problem” declared Alec Baldwin as he held aloft the two halves of the invocation challah at ELEM -Youth in Distress in Israel’s June 16 gala benefit at the Jewish Museum. “I think I may [even] be half Jewish, because I have so many Jewish friends,” joked Baldwin, who presented an award to literary property lawyer and agent Karen Gantz Zahler and her husband Erich Zahler, president and chief operating officer of Loral Space & Communications Inc. and a founder of Yale Hillel. Emceed by TV personality and fashion expert David Evangelista, the event also honored fashion designer Randi Rahm, whose red carpet “hits” have been showcased by Beyoncé, Christina Aguilera, Halle Berry and Eva Longoria Parker. The Zahlers and Rahm are supporters of ELEM’s mission to reach the 100,000 at-risk children in Israel. In a video presentation, ELEM/Israel’s president, Nava Barak, highlighted ELEM’s programs, which include mobile units and youth centers staffed by professionals and volunteers.” Rep. Nita Loewy praised ELEM for its “truly exceptional efforts, a source of invaluable assistance to tens of thousands,” stressing that “a community is measured by [how it treats] its least fortunate.” Hebrew University professor Uri Lavi, an ELEM volunteer, explained: “Though I am a professor of genetics at Hebrew University, [I am aware] of how great an impact the environment and economic difficulties have on one’s life. I became a volunteer with ELEM a year and a half ago to help kids in danger of becoming criminals… to offer the youth a friend on whom they can rely.… These kids need an alternative, courses, job opportunities.” As an afterthought, he mused: “Still, not all these things are successful. Sometimes we fail.” But one of his success stories is 19-year-old Adir Sabag, a former juvenile delinquent whom Levi mentored. In phonetic English, Sabag recounted: “My mother is a cleaning woman. My dad is in prison now. If not for ELEM, I don’t know where I would be…. [ELEM] became part of my life and my family.”

ELEM/America Board President Ann Bialkin announced that the benefit raised more than $400,000.