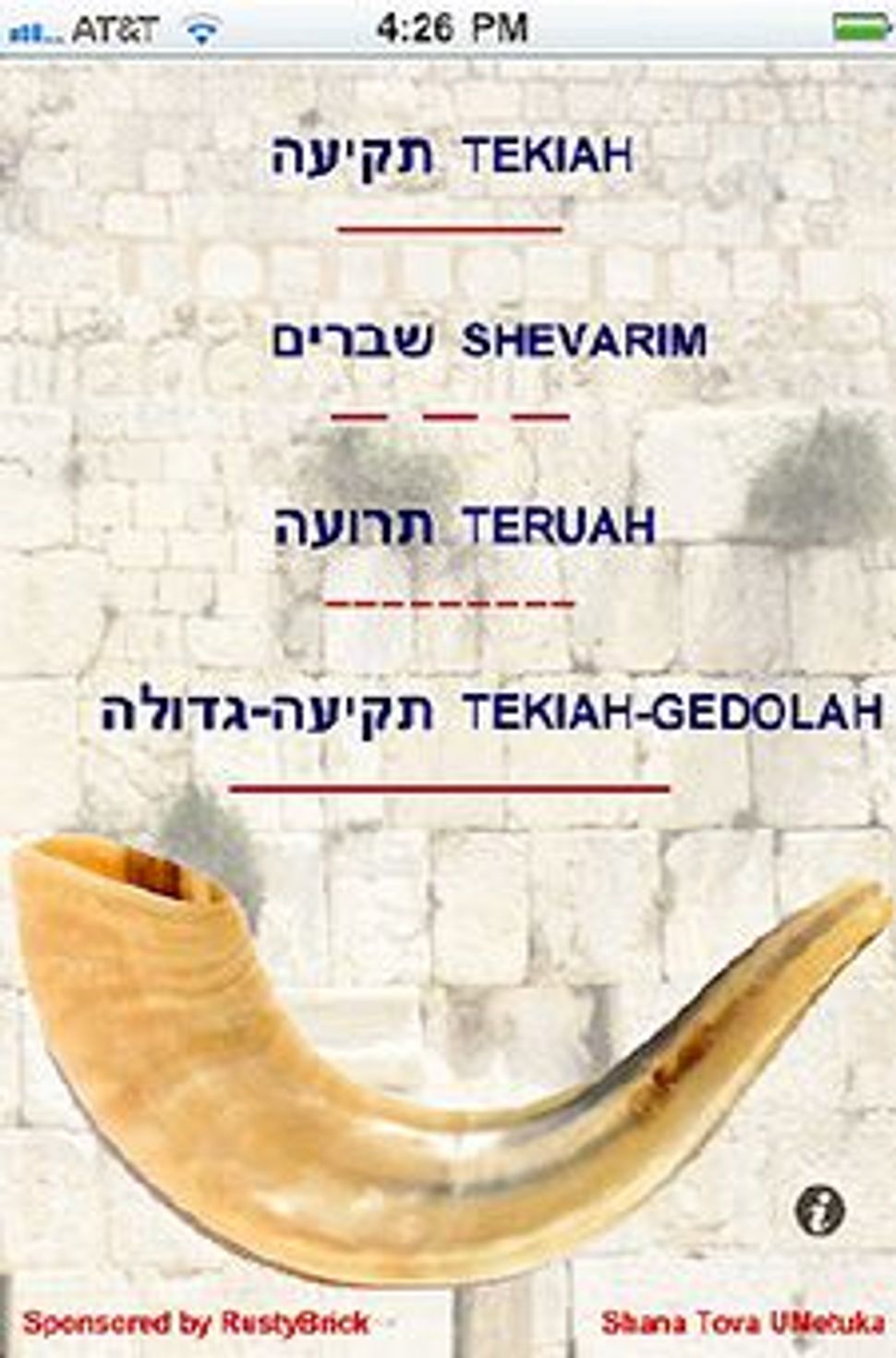 People of the App: Jewish apps like the electronic shofar above can help people become more attuned to traditions.

In the age of the iPhone, keeping the faith has never been as flexible and accessible as it is now. According to a recent report from ABI Research, the app industry is set to achieve 44 billion cumulative downloads by 2016. While there are no numbers on faith-based downloads alone, religion — especially Judaism, which has long wrestled to adapt to the times — is very well-represented in this space. 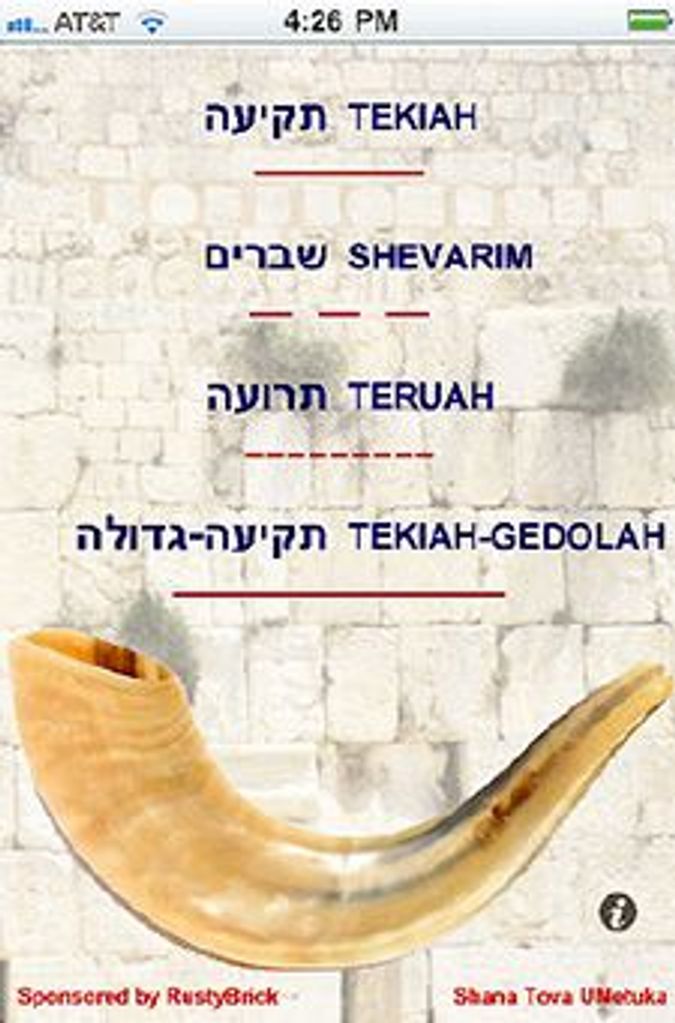 People of the App: Jewish apps like the electronic shofar above can help people become more attuned to traditions.

Although religious curiosity can currently be satisfied as easily as a burrito craving, can the fast-foodification of Judaism inspire a selectively observant Jew to fill up on his faith? After downloading a bunch of Jewish iPhone apps recommended by rabbis and other righteous friends, Mike Dojc decided to take them on a road test.

We Jews like our food, so to whet my appetite for an immersion into smartphone Judaism, I start with a food-related app.

Sitting at a Starbucks, about to nibble on a tiramisu cake pop, I realize that I have no idea what the prayer for desserts is. So I tap on the cookie on iBlessing’s virtual placemat, and voila — the mezonot blessing is recited aloud, so I can pray along. The simple blessing guide includes English translations, making it an indispensable aid to the newly observant, and also provides a quick refresher to longtime prayer veterans who may have forgotten a couple. A drawback is that the prayers are read in a thick Ashkenazi accent, so total newbies will develop the associated lexical stresses (that is, “olam” is pronounced “oylam”).

The next day, while waiting in a green room for a television appearance, to quiet my nerves I decide to tap open Accordance (free), a Bible-study app which Dan Medwin, publishing technology manager of the Central Conference of American Rabbis, recommended. A slot-machine style interface allows me to snappily line up my desired book, chapter and verse, or search for a particular word to bring up all matches. I summon every appearance of the word “confidence” in the Tanach and come across Proverbs 3:26, which states, “for the Lord will be your confidence and keep your foot from being caught.” That seems apropos, and sure enough, my television appearance goes off without a hitch. So, not only had I channeled Hebrew holy books via an app, but I also managed to apply this app’s guidance to the here and now.

Later, waiting to meet a friend at a movie, I decide to download Shofar (free) and sound a few tekias and teruahs (two of the four types of shofar notes) by tapping on the corresponding words. I find that another app, iShofar ($0.99), simulates the experience of playing a ram’s horn more eloquently by marrying gestures to the various blast sounds; for the shevarim, which is a straight, unbroken blast, you drag your finger over the length of the shofar.

I was curious about whether shofar apps are kosher, so I asked my rabbi, Daniel Sherman of the Tree of Life Reform synagogue in Columbia, S.C. He explained that Lishmoa Kol Shofar, the blessing we recite before we blow the shofar on the High Holy Days, has nothing to do with blowing — it has to do with hearing.

“iShofar [and other Shofar apps] gives you a recorded voice of an actual shofar. So can one fulfill the mitzvah using one’s iPhone? That’s one when it seems maybe you can,” he explained.

Next, I download Sefiros lite (free) in order to get better acquainted with the 49 days of the Omer, as the current period between Passover and Shavuot is called. The app is based on Rabbi Yaacov Haber’s book of the same name. Previously, I was unaware that the Omer was something Jews count daily with a blessing. But open the app, and the prayer for the current day pops onto the screen. I can adjust the settings to change which nusach, or tune, suits me (that is, Sephardic, Mizrahi, etc), and change the wording accordingly. To take Omer observance to the next level, there’s the full version, Sefiros Grow ($4.99), which adds doses of insightful commentary to go along with each prayer. I find the commentary easy to digest, and thanks to such spiritual action points as, “Discover something beautiful about God’s world that you never noticed before,” each day is imbued with added meaning.

Days later, during breaks in the action of a couple of pivotal NBA postseason games, I decided to treat myself to portion-controlled slices of religion. I perused the upcoming Torah portion via iParashah ($4.99), which is accessible in both Hebrew and English, and also shot a virtual pencil at letters in the Hebrew alphabet in the educational game “Alef-Bet Bullseye” ($1.99), which, while not quite as addictive as “Angry Birds,” can still manage to keep you captivated for five minutes at a time. Both apps provide a solid foundation for further exploration, and they’ll certainly get you primed to be called up for your next aliyah at services.

With all this iLearning, it dawned on me that while there are apps that home in on most facets of Judaism — from rattling a grogger (Grogger Factory, $0.99) to lighting a menorah (iMenorah, $2.99) — there are aspects that can never truly be mimicked, such as the solace provided by a rabbi to a family mourning the loss of a loved one. And while interactive apps can create a semblance of connection with God, they can’t begin to replace the bond-forming personal interaction that goes on in a congregation before a service starts.

Since embarking on my app immersion, I don’t feel a full tilt holy wind behind my back, but I have become more attuned to the traditions and teachings of Judaism. Jews have always been people of the book, and perhaps now we are about to become the people of the app.

Mike Dojc is a journalist and copywriter based in South Carolina.