Republicans Use Israel To Attract Jewish Voters — And Jewish Money 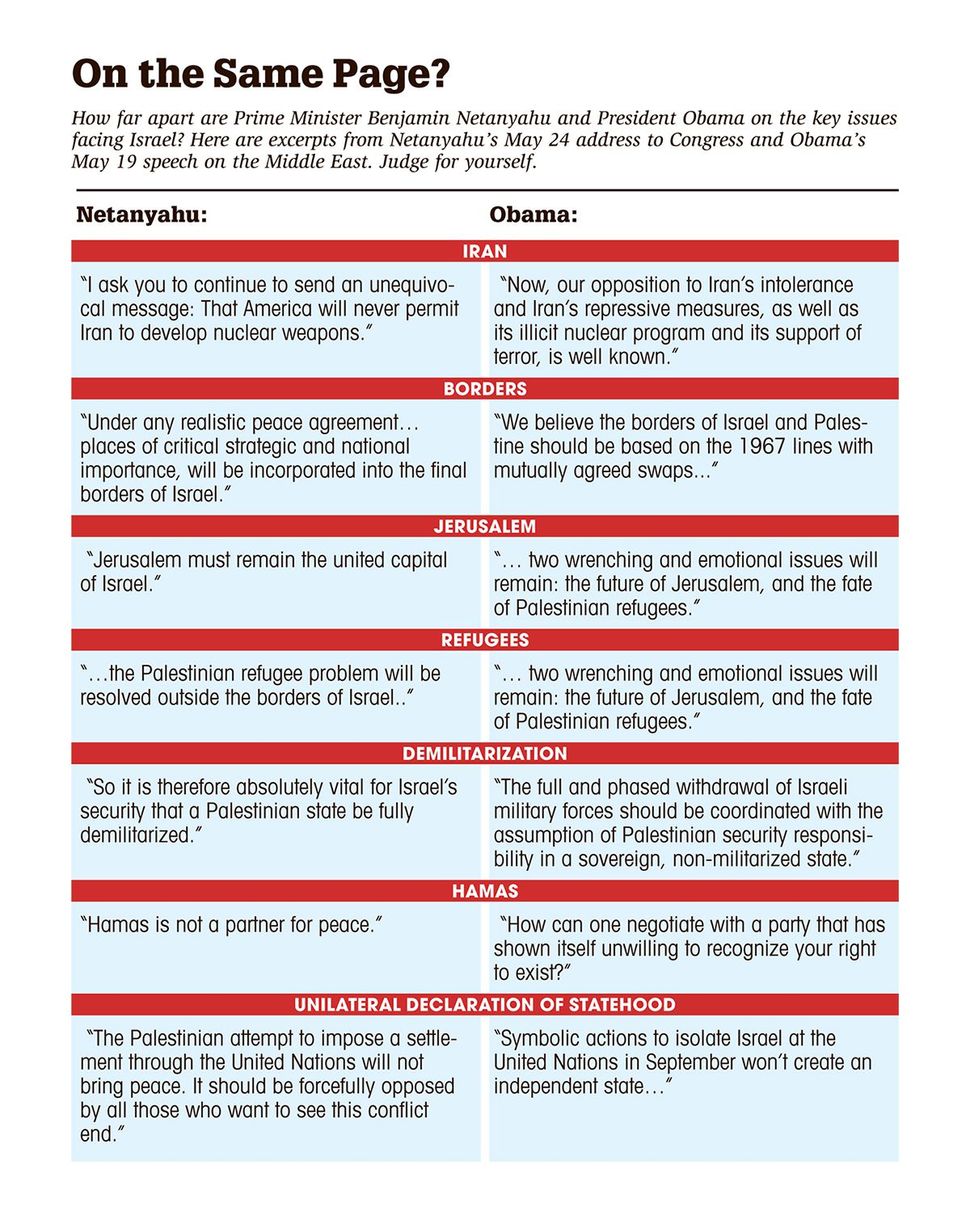 The potency of Israel as a wedge issue for Republicans going into 2012 was on full display when Israeli Prime Minister Benjamin Netanyahu invited a small group of Democrats and Republicans to a first-ever joint meeting at Blair House one day before his May 24 speech to Congress. 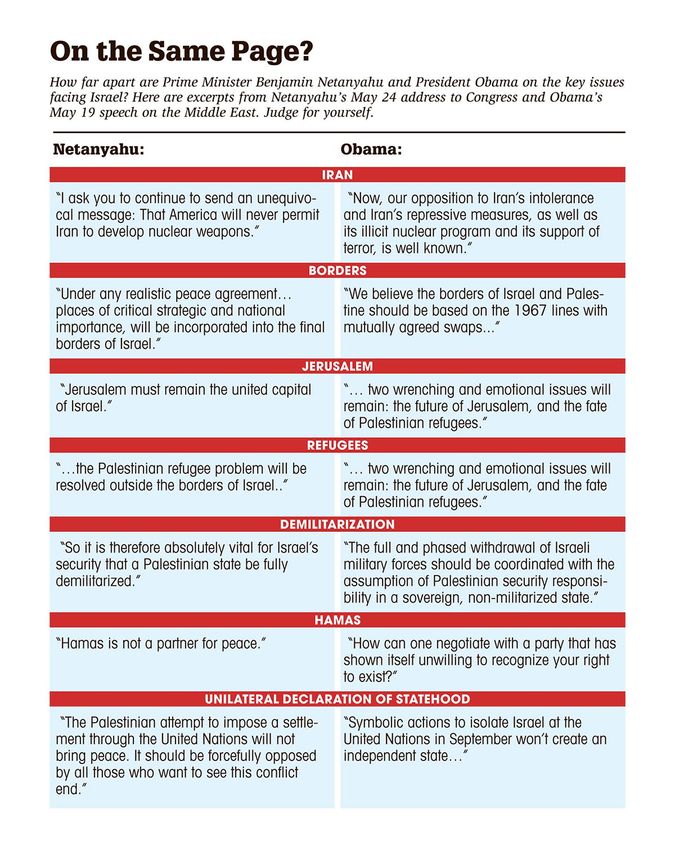 During his high-profile congressional speech, Democrats and Republicans rose as one to applaud Netanyahu about 30 times. But at the smaller meeting, what was meant to be a show of bipartisanship ended as a war of words between the heads of the National Jewish Democratic Council and the Republican Jewish Coalition.

Florida Rep. Debbie Wasserman Schultz, the newly appointed head of the Democratic National Committee, suggested at the meeting that both parties pledge not to raise the issue of Israel in a partisan manner. But an angry Matt Brooks, executive director of the RJC, responded the following day in a letter to Wasserman Schultz that her request, made in front of a foreign leader, was politically motivated.

“I understand that you would like to stifle debate in the Jewish community on these issues, but the RJC believes they are legitimate issues and part of a healthy and vigorous debate,” Brooks wrote.

Tense relations between President Obama and Netanyahu are raising concerns in both Washington and Jerusalem, but for political activists vying for Jewish votes, they could mean a new opportunity to sway the pro-Israel community.

At the recent annual gathering of the American Israel Public Affairs Committee, pro-Israel activists found themselves courted both by Republicans critical of Obama’s Israel policy and by Democratic lawmakers seeking to distance themselves from the president. Democrats have brushed off Republican claims for potential gains in 2012 and pointed to the decades-long history of Jewish support for their party despite repeated attempts by Republicans to make inroads to the Jewish community. But the GOP believes there is a new opportunity for winning over some voters and — no less important — pushing big Jewish donors away from Obama’s re-election campaign.

Republican Ari Fleischer, who was the spokesman for the second President Bush, argued in a panel discussion at the AIPAC conference that even a small shift by Jewish voters, that could be generated by the controversy around Obama’s recent remarks upholding Israel’s 1967 borders, with adjustments, as a basis for Israeli-Palestinian peace talks, could make a big difference for Republicans. According to Fleischer’s calculation, if the Democrats’ 4-1 favorable ratio among Jewish voters drops to 3-1, it could be enough for Obama to lose both Florida and Ohio in the upcoming elections.

Such a shift would depend largely on the AIPAC crowd, a group that has Israel as its top concern when making political decisions. While a majority of AIPAC members and activists, according to a former staffer, are Democrats — as are most members of the Jewish community — strong supporters of the group are more likely to make political decisions based on the candidate’s views on Israel.

Noam Neusner, a former speechwriter for Bush, offered a personal estimate of the American Jewish vote and Israel’s place in it: Only half of Jewish voters see Israel as a major concern, he said, and of these, half are already Republican. For the GOP, he said, “One of four Jewish voters are gettable through the prism of the Israel issue.” He stressed that his estimate was not based on polling data.

Dick Weiland, an AIPAC delegate from Cincinnati, said he was “very concerned” after hearing Obama’s May 19 speech on the Middle East. As he waited to enter his May 24 lobbying meeting, Weiland made clear that thanks to the clarifications made by Obama when he addressed the lobby May 22, all is gone, but not necessarily forgotten.

“I would have liked him not to have said it in the first place,” he said. Weiland did not rule out the possibility that tensions between Obama and Netanyahu will sway his vote come November 2012, and said he is still waiting to see who is running on the Republican side.

“Clearly some will use this moment for partisan political gains,” said David Harris, president and CEO of the NJDC. “The single best thing we can do is get the facts out.”

Harris cited the AIPAC speech that Obama made two days after his speech on the Middle East, in which he raised the significance of the 1967 borders as a starting point in negotiations. In the later talk, Obama emphasized that the these lines would require adjustments that both parties would have to agree on during those negotiations.

Nevertheless, some key members of the president’s own party are choosing to distance themselves publicly from Obama on Israel following his Middle East policy speech. At the AIPAC conference, top Democrats from both chambers took to the stage and rebuked Obama’s message on the border issue. Senate Majority leader Harry Reid, in his May 23 address to the lobby, declared, “No one should set premature parameters about borders, about building or about anything else.”

Several Jewish members of Congress issued statements that highlighted their differences with the president regarding the 1967 lines.

Former Rep. Robert Wexler, who until last January represented a Florida district that has a significant Jewish population, said members of Congress should keep in mind that Obama’s move was made to advance peace, not to win a debate. “We should remember that it is easier being a member of Congress or a senator than being the president of the United States,” said Wexler, who now heads the S. Daniel Abraham Center for Middle East Peace.

For Democrats, the main potential concern as they look ahead to the presidential elections cycle is a lack of enthusiasm among Jewish voters and donors who, according to many estimates, make up more than half of the donations to the party’s candidates. A May 19 article in The Wall Street Journal reported that Jewish fundraisers and donors warned the Obama campaign that the president’s positions on Israel could cost him financial support. But Harris argued that the reality on the ground is different. “Maybe you can find a few people that are not pleased, but the numbers show a different picture,” he said.

One of those few displeased people is Israeli-born TV mogul Haim Saban, one of the biggest individual donors to the Democratic Party. In a May 24 interview with CNBC, Saban said that Obama should do more for Israel. Saban also stated he does not intend to contribute to Obama’s presidential campaign. “President Obama has raised so much money and will raise so much money through the Internet, more than anybody before him. And he frankly doesn’t, I believe, need any of my donations,” Saban said. He added, however, that he’d keep supporting Democratic congressional and senatorial campaigns.

“If there is a smell of tension, the sides will abuse it. No question about that,” said Abraham Foxman, national director of the Anti-Defamation League.

For the AIPAC rank and file, the focus during the policy conference was on issues more than on party identification. House Majority Leader Eric Cantor won more applause than any other politician speaking at the event when he told lobby delegates that the problem with peacemaking was the Palestinian side, not Israel’s refusal to withdraw to the 1967 borders. But Democratic Whip Steny Hoyer got a similar reaction when he, too, challenged Obama’s statement on borders.

“I don’t think what Obama said will change anyone’s mind,” said AIPAC delegate Robert Simon, from Wyndmoor, Pa. Simon, a registered Republican, did not like Obama’s mention of the borders but insisted that it was not a deciding issue for him.

“I didn’t call my rabbi and tell him to condemn Obama from the bimah, which is what some of my fellow congregants did,” Simon said.

Republicans Use Israel To Attract Jewish Voters — And Jewish Money