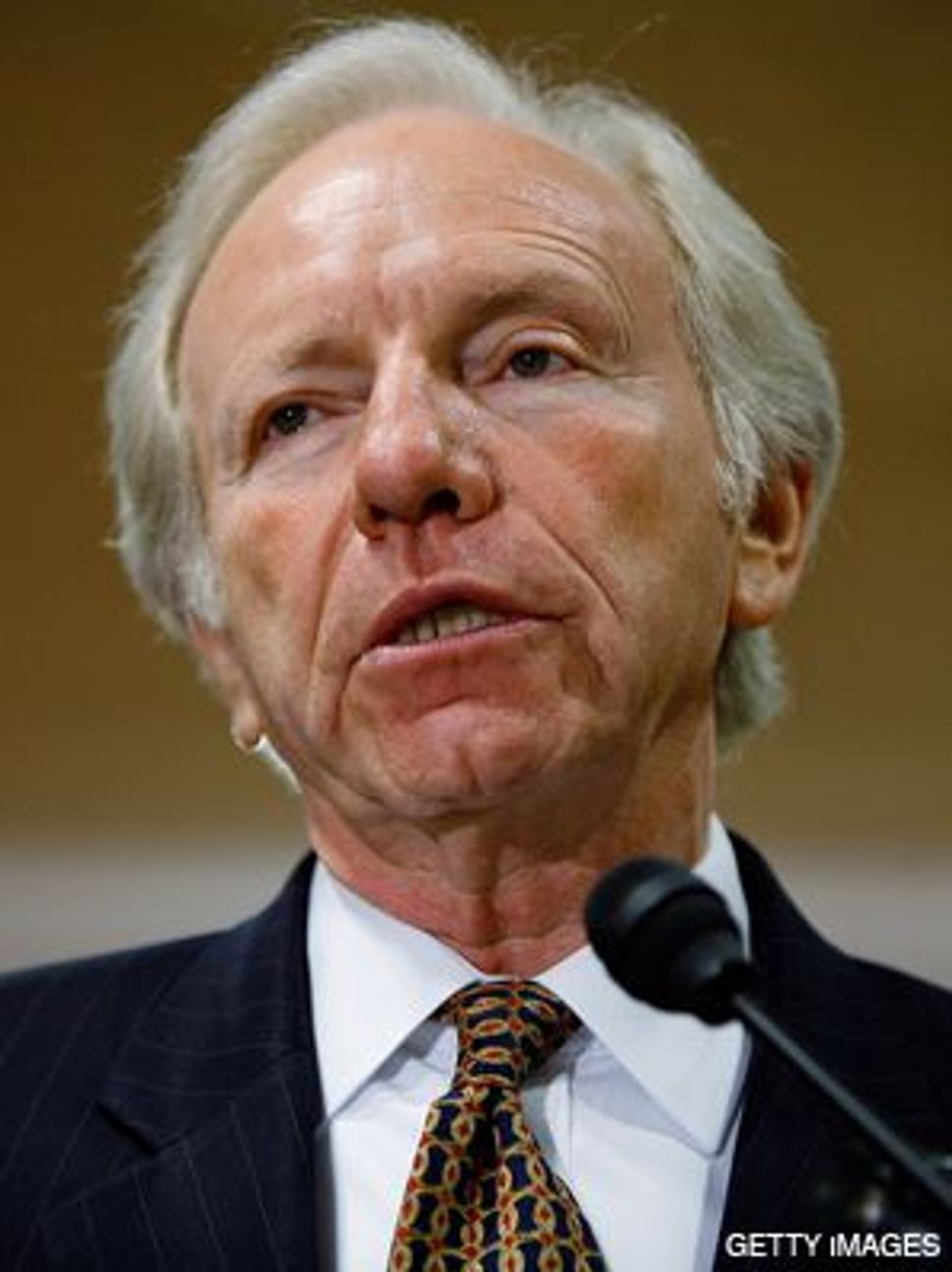 ON THE TRAIL: Lieberman traveled on McCain?s bus in Florida.

Washington — Senator Joseph Lieberman recently got a double dose of Jewish folk songs. On July 21, a day camp girls’ choir at a South Florida synagogue greeted him with “Hevenu Shalom Aleichem.” The next day he heard exactly the same song, only this time it was performed by a young, enthusiastic Christian group that was welcoming him to an annual conference of evangelical supporters of Israel. 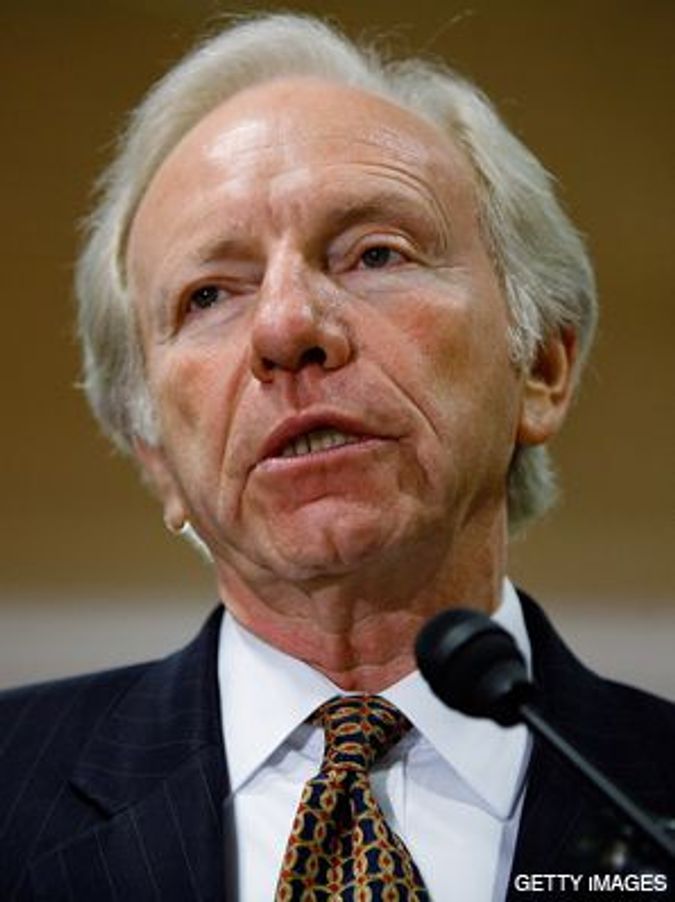 ON THE TRAIL: Lieberman traveled on McCain?s bus in Florida.

At the conference, Lieberman delivered a passionate defense of the group’s leader, Reverend John Hagee, who has been under fire from both the Jewish community and the liberal pundits.

Just two election cycles ago, the senator from Connecticut was the pride of Jewish Democrats. Now an independent, he is positioning himself as far as possible from the Jewish political mainstream, stumping for Republican John McCain in the Jewish heartland of South Florida, embracing right-wing evangelical preacher Hagee and ignoring calls from liberal Jewish groups to boycott the conference.

Lieberman traveled in Florida on board McCain’s campaign bus, the Straight Talk Express, touting the Republican candidate’s credentials on issues relating to Israel, the Middle East and foreign policy. In a meeting with Jewish voters at The Shul, an Orthodox synagogue in Bal Harbour, Lieberman blasted Democratic candidate Barack Obama, arguing that he lacks McCain’s ability to deal with conflicts abroad. “This is more than making a good speech and seeming cool,” Lieberman said. “This is about who’s going to get up there and fight for you against enemies abroad and people who are trying to compromise your rights here at home.”

Jewish Republicans view Florida as a possible battleground state for Jewish voters this year, arguing that the older and more conservative demographic profile of Jewish voters in the state could bode well for McCain.

Adam Hasner, a Florida state legislator who co-chairs McCain’s Florida Jewish outreach operation, said Republicans are planning a “very aggressive grass-roots approach” aimed at Jewish voters in the Sunshine State. “What I am hearing in the community is that Jews are warming to the idea of voting for McCain,” Hasner said.

Lieberman’s tour of the state, one of the highlights of the Republican effort, was countered by a concentrated media blitz from local Jewish Democrats, headed by Rep. Robert Wexler, one of Obama’s earliest Jewish supporters. In a July 21 conference call with the press, Wexler tried to downplay Lieberman’s sway with more conservative Jewish voters. “I am fond of Senator Lieberman. I actually supported Senator Lieberman when he ran for president. But Senator Lieberman does not enjoy credibility with my constituents,” said Wexler, whose Delray Beach district is home to many Jewish voters.

Ira Forman, executive director of the National Jewish Democratic Council, argued that contrary to common wisdom, Lieberman is not a crucial factor in determining the Jewish vote. “I wouldn’t overemphasize the Lieberman factor,” said Forman, who pointed out that having the Jewish senator on the 2000 presidential ticket did not have any visible impact on Jewish voting patterns.

In Florida, Lieberman’s talks with Jewish voters focused on hard politics. The senator stressed McCain’s foreign policy experience while assuring the Jewish voters that the candidate is not an extreme conservative who will change the Supreme Court balance or cut social services. “He is not a radical,” Lieberman told a crowd in Surfside, just north of Miami Beach.

While Lieberman’s focus when talking to Jewish voters was on Israel and foreign policy, it was the Christian audience in Washington that got to hear the senator’s more biblical rhetoric.

Addressing the Christians United for Israel conference in a July 22 keynote speech, Lieberman drew from the scripture time and again to emphasize his friendship with the evangelical group. “I am your brother Joseph,” Lieberman told the crowd, which responded with a long-standing ovation and waving of American and Israel flags. “Blessed are you in the name of the Lord,” he added.

Lieberman said that the political controversy surrounding his host, Hagee, reminded him of the biblical heroes who also had human failures, pointing to Moses and his sister Miriam. He later referred to the biblical story of Jacob and Esau to demonstrate the need to prepare for the worst with Iran. “You and I and Pastor Hagee all believe in the Bible,” Lieberman said. “We believe in the God of the Bible. We love God.”

Most of his speech, however, was devoted to rebutting criticism of Hagee. The San Antonio preacher, founder of Christians United for Israel, came under fire recently because of a past sermon in which he had said that the Holocaust was part of a divine plan to push the Jews back to the Land of Israel. Several Jewish groups urged Lieberman not to attend the conference. A petition organized by the dovish J Street Group, signed by 40,000 people, called on Lieberman not to show support for Hagee, who opposes a two-state solution in the Middle East. Lieberman told the crowd, estimated by organizers at 4,500, “There has been a campaign to stop me, but the bond I feel to Pastor Hagee and to you is much stronger.”

Hagee himself accused the media of being biased in their reporting on him and the organization he heads. “The man who does not read a newspaper is uninformed, and the man who does read the newspaper is misinformed,” Hagee said. The pastor stressed that while his organization is skeptical of the notion of trading land for peace, it leaves the decision up to Israel.

Suspicion toward the press was apparent not only in Hagee’s speech but also throughout the conference. Press was barred from covering many of the meetings, and participants were told not to talk with reporters.