From Winnie-the-Pooh to Israeli Gan Garoo 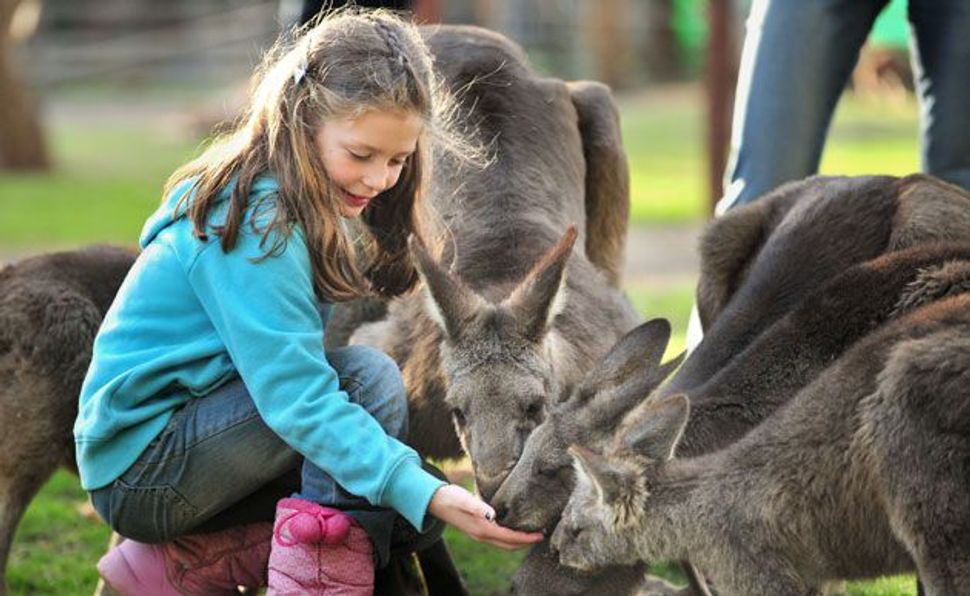 A Symbolic Olive Branch: A young girl feeds kangaroos at Gan Garoo zoo, located in northern Israel, which was established to address the kibbutz movement?s need to diversify from farming. Image by Almog Dvir

Koalas are on treetops, feasting on eucalyptus leaves, and kangaroos are bouncing around. But this isn’t rural Australia — it’s Israel.

Here, visitors can travel to a different continent — thanks, bizarrely enough, to the British creator of the anthropomorphic bear Winnie-the-Pooh, A.A. Milne.

Some 64 kangaroos and two koalas live at the cleverly named Gan Garoo (“gan” is Hebrew for “park”), located in northern Israel’s Beit Shean Valley. Children can laugh with the laughing kookaburra, marvel at the majestic pteropus (or flying fox, as it is commonly known) and admire other species, including cockatoos, cassowaries, wallabies and emus.

The four-acre park is largely covered with the flora and fauna familiar to the species, meaning that visitors can get a real Australian experience as opposed to the sense of out-of-place animals.

The idea for Gan Garoo was born in the 1990s to address one of the key challenges the kibbutz movement has faced in the past three decades: the need to diversify from farming. Nir David, a typical agricultural kibbutz, decided it would do this by establishing a tourist attraction. Lifelong member Yehuda Gat recalls the deliberations. “There were all sorts of ideas — mine was originally a Hundred Acre Wood or some other Winnie-the-Pooh themed attraction. I have a map of the wood, and wanted to make a park that followed the map exactly, but in the end we decided it wouldn’t have wide enough appeal in Israel.”

But Gat was too big a Milne fan to drop the Pooh train of thought altogether — and it got him to the idea of kangaroos. “It all began with Pooh. After my original idea, I was thinking of the Pooh characters Kanga and Roo,” he told the Forward.

In 1994, never having set foot in Australia, he started studying kangaroos, and then in 1996 he went to Australia to take courses in caring for them. Gan Garoo, which is built on Nir David land and owned by the kibbutz, opened the same year, with the blessing of the Australian government’s wildlife protection agency and initial donations of 18 kangaroos from Australian zoos.

The kangaroos flew on KLM and British Airways, and because they all came from southern Australia, where the climate is similar to Israel’s, they quickly adapted to their new home. Many Gan Garoo kangaroos today are sabras — Israeli-born descendants of the original immigrant kangaroos.

And like Israelis, they have developed a taste for matzo. “They absolutely love it,” Gat said. Unlike other Israeli zoos, Gan Garoo contains no cages or barriers keeping visitors apart from the animals. In fact, Gan Garoo is thought to be the only park outside Australia where you can pet kangaroos. Not only can visitors enter their huge enclosure, but they also can also feed the kangaroos. For the equivalent of a few cents, a machine dispenses grain-based pellets, which the kangaroos love almost as much as matzo.

The experience is so authentic that people have been known to mistake it for the real thing. “After we came here once before, an Australian relative e-mailed complaining that we’d been to Australia without making contact,” said Anat Tiferet, who was visiting from Tel Aviv with her two children. “They saw photographs we posted on Facebook, and [the photos] looked so Australian, the relative presumed they were taken there.”

In November, the Australian ambassador to Israel, Andrea Faulkner, opened an aviary on the grounds, where 50 brightly colored Australian parrots — rainbow lorikeets — fly around and eat from visitors’ hands.

Today, Gat, now 64, is president of the park and is one of the Middle East’s leading kangaroo experts. His team ensures that the park plays a role in international breeding and preservation programs. In recent years, as well as transferring kangaroos to various Israeli zoos, it has provided kangaroos — for free — to zoos in Latvia, Jordan and to the Palestinian-run Qalqilya Zoo, in the West Bank.

Lavi Meiri, director of Nir David’s tourism initiatives, sees the kangaroo as the new olive branch. “We named a male kangaroo we sent to Jordan ‘Shalom.’ It was a way of sending a message that we want peace and think about peace,” he said.

From Winnie-the-Pooh to Israeli Gan Garoo