Summer Lovin’ Outside the City 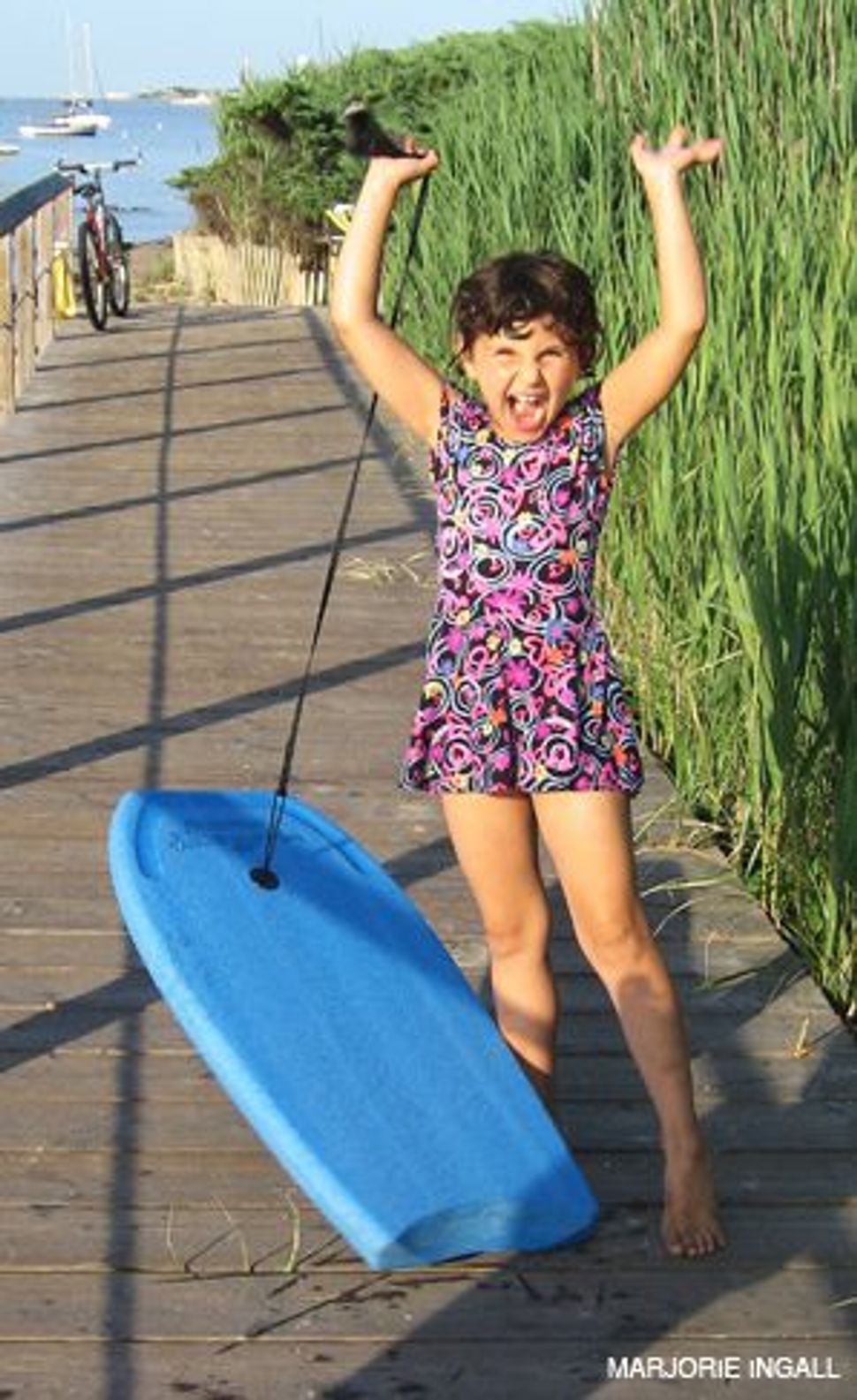 Most of the time, I am self-righteous and self-congratulatory about my choice to raise children in the city. I pontificate about the myriad cuuuuultural opportunities and diveeeeersity; I boast about being able to walk everywhere; I coo about living in a tenement just like the ones our huddled-mass Jewish ancestors yearned to escape. I am so strident and smug about my urban life, perfect strangers want to slap me upside the head. 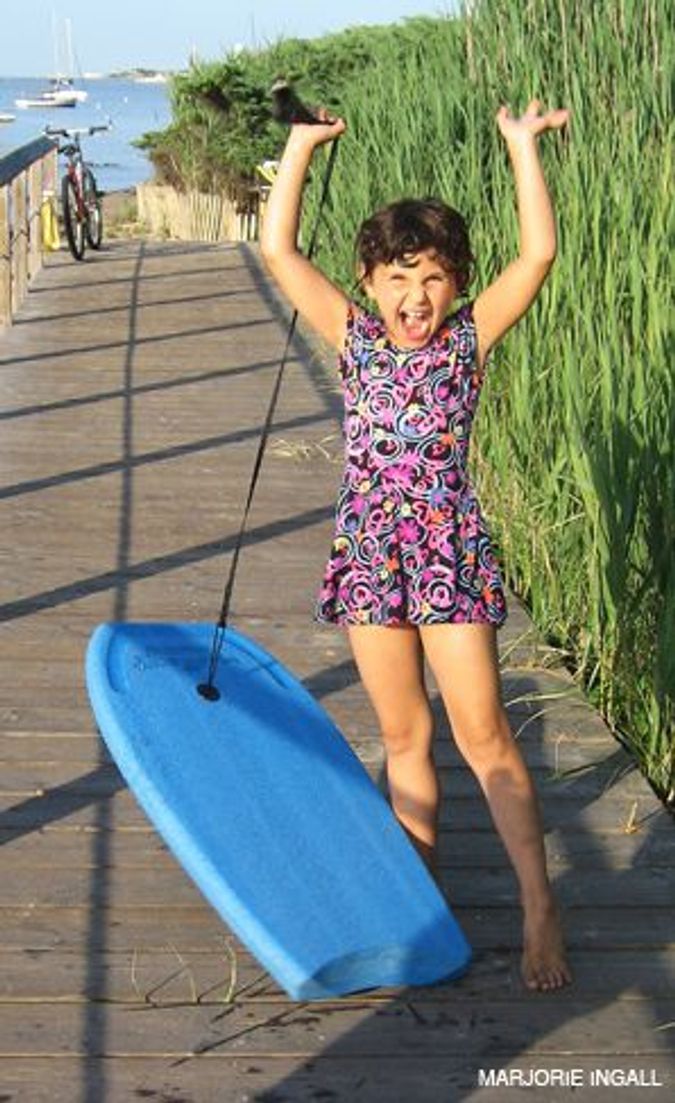 And then I have an eye-opening weekend outside the city. And I waver in my faith.

Last weekend, Josie and I had a little getaway, just the two of us. We went to Fire Island, where friends of ours have a summer house. I hadn’t been to Fire Island in 15 years; I didn’t even know there was a family-friendly version. The last time I was there was with party-hearty gay male friends; the weekend was a blur of booming house music and chiseled pecs. I have only the dimmest memory of the ferry ride home.

But this time, when we got off the ferry, we were in Mayberry. (“Mayberry for rich people,” corrected my friend, ruefully.) Apparently there are two Fire Islands: One consists mainly of “Whooo Towns,” aka streets full of bar-hopping partiers (gay or straight) raising red plastic cups and shrieking, “Whoo!” But the other Fire Island teems with strollers and organic string cheese; the only booty-shaking involves Veggie Booty.

The sign by the dock said, “A barefoot community,” and indeed, kids were running all over town like little shoeless, sandy-footed urchins. There are no cars. People pull their groceries in wooden wagons. Shady trees line the boardwalks that criss-cross the town; you can traverse the island, ocean to bay, in about seven minutes. I watched a little girl learn to ride a two-wheeler (the boardwalks are perfect straightaways with soft sand on the sides). Her mom ran behind her, hand on the back of the seat, and then let go. Wobbly but upright, the little girl gasped, “Mama! I’m riding a bike!” The mom cheered.

The bay had a roped-off swimming area, a tiny beach with a lifeguard chair smack in the middle. There were no obstructed sight lines; the water was maybe two feet deep. There was a wee playground right next to the beach. My friend, who in the city is one of those predators-in-trenchcoats-lurk-on-every-corner parents, genially let her kids run off, barefoot, solo, to swim and climb and play all day without supervision. No one locks doors. There are no hotels; generations of families return summer after summer. There’s a general store where kids, clutching handfuls of change, can buy a toy for less than a buck. People fish off the dock. Mayberry, I tell you!

Josie spent the weekend collecting sand crabs in a green plastic bucket, trying to feed them seaweed and shrimp. She dug holes in the sand with a posse of other little girls. She and her friends sold homemade chocolate-chip cookies and shells at the dock at sunset. With their earnings, they bought a little balloon-powered helicopter at the general store, then spent hours chasing it around the beach. (When it crash-landed on the roof of a shade structure, a shaggy-haired boy in a baseball cap, around 8, leaped off his bike, leaving it the middle of the boardwalk, and hollered, “I’ll get it!” He then shinnied up the pole, crawled across the roof and, beaming, rescued the copter. Later, I saw him fix a tangled swing in the playground by crawling across a beam. Mini-mensch!)

Josie, 6, shimmered with joy. Without 3-year-old Maxine to taunt and be taunted by, she was her own person. I felt blessed by the chance to appreciate her as a solo artist. When did she become such good company? She was consistently polite to grownups, flexible in unfamiliar situations. (I do not tend to think flexibility is one of her virtues.) She ate healthfully despite being surrounded by junk food options. When she needed to entertain herself, she didn’t complain; she dove into a book. She approached every planned activity with joy and enthusiasm: a water taxi ride! A long walk on the beach! A hike to a lighthouse with 192 steps to climb! She thanked me repeatedly for taking her on this trip. She cuddled. She didn’t kvetch. As much as I adore her, I tend to think of her as a bit of a kvetch. And suddenly I realized that my perceptions of her might be, uh, wrong. The way I tend to think about her lags behind who she is becoming. I tend to drey about my flaws as a parent and her flaws as a kid; perhaps you’ve noticed. Out of our element, though, I could see that she was a sweet, unjaded, empathetic kid. Would it kill me to ease up on myself, and on her? Getting obsessive is a choice. Sometimes I forget that.

And it was great for Jonathan and Maxine, little mama’s girl that she is, to hang out together. It was healthy for him to see how much work — and how much fun — being the go-to parent can be; it was healthy for her to bond with Daddy without the option of glomming on to Mama.

On the ferry home, I went back into drey mode. Though I can be dithery and anxious (ya think?), one thing I’d never doubted was my decision to raise city kids. (I knew how much trouble kids can get into in the suburbs.) I’d never considered the option of small-town life. Was I doing my kids a disservice? Had I just witnessed what childhood was supposed to be? Surely there are other places in America where kids run around barefoot and independent, problem-solving without helicopter-parenting.

I honestly don’t feel badly about not being able to afford a country house. But what about full-time country life? I keep seeing Josie’s tanned, filthy little feet, and imagining the freedom we could have. And then I worry about finding a Jewish community, and liberals, and good coffee. I know there’s no perfect life anywhere…but what if there is?

Summer Lovin’ Outside the City