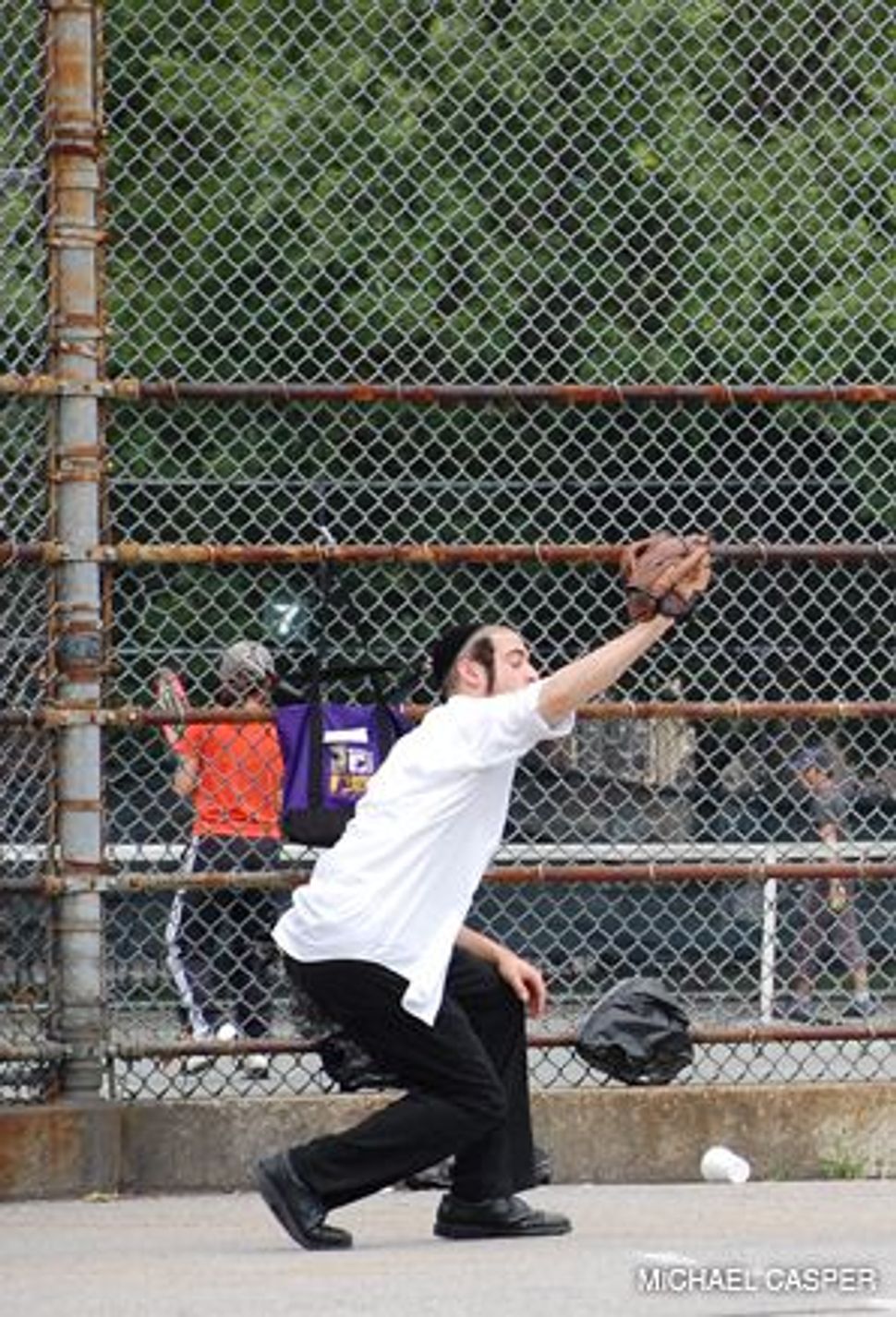 SPORTSMEN: A group of Hasidim play Sunday softball games with the Stormers, a team of Brooklyn?s Greenpoint Softball League.

Peyes swing from under Yankees caps, and players sling Yiddish jeers from the outfield, when the Stormers take the hardtop for their Sunday games at Brooklyn’s McCarren Park. The teams of Brooklyn’s Greenpoint Softball League reflect the boro’s inimitable patchwork of cultures, and the Stormers — with a hardworking 3-23 record — represent Williamsburg’s sizable but insular Satmar Hasidic community. 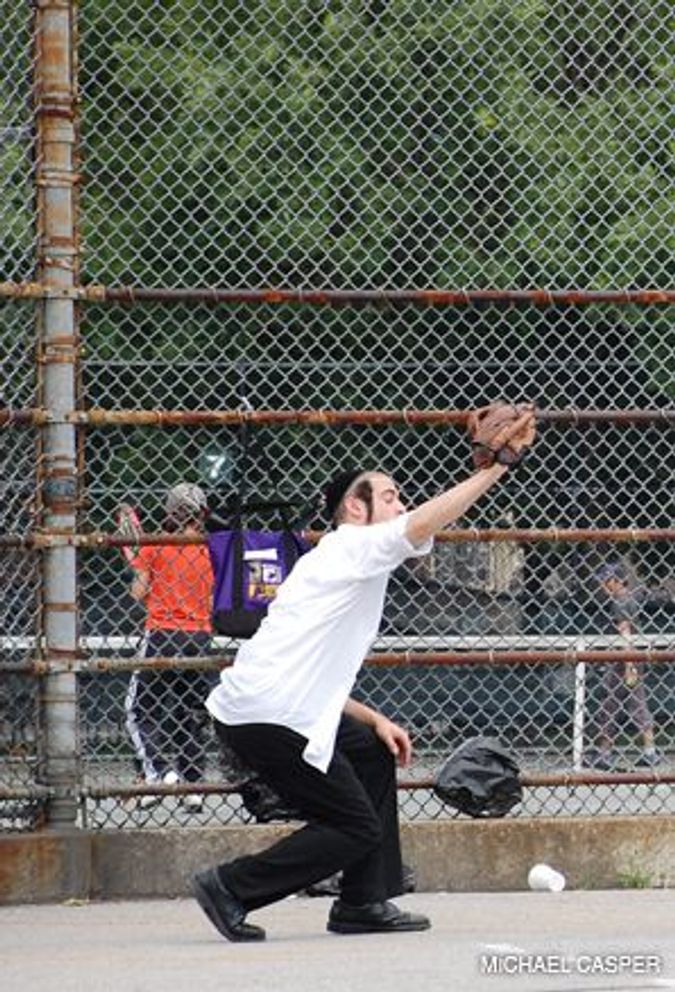 SPORTSMEN: A group of Hasidim play Sunday softball games with the Stormers, a team of Brooklyn?s Greenpoint Softball League.

The Stormers are a ragtag band of yeshiva students in their late teens and early 20s who report to the field in tailored day clothes and disappear briskly after games. They began in a pick-up match here in 2002 and, after being invited to join the local league last year, debuted as the Blue Sox, taking the name and navy blue uniforms of an Israeli baseball club. This season, most players, remade with a more aggressive moniker, suit up by removing their brimmed hats and overcoats and pushing up their shirtsleeves.

To some, the Hasidic ballplayers seem to have stepped from the famous opening passage of “The Chosen,” Chaim Potok’s novel about boys from pious families of Brooklyn’s Williamsburg who struggle with their parents over the draws of assimilation, including long afternoons on the baseball diamond.

Shimi Rosenberg, the Stormers’ 20-year-old third baseman, knew of the book’s movie version. “It’s like that for us,” he said recently, while lacing up his cleats before a late-night scrimmage under the lights of this popular park near the Bedford L subway stop.

Although they practice here almost every day during the league’s summer season, most team members say that their families think they are going out to study, but instead they surreptitiously partake in America’s favorite pastime. “No one would like to know their kids are playing with goyim in the park,” Rosenberg admitted. “But they don’t know that they’re not the bad kind.”

At the scrimmage, a half-dozen Hasidim in good spirits razzed the other dugout in Spanish. “Judios, play ball! Judios, play ball!” their opponents called back in jest. Among them was Aron Nuñez, who recalled with a smile his first encounter with the Stormers: “I wasn’t expecting them to be that good. But they all can hit. They all can field.”

Jim Sherman, longtime director of the Greenpoint Softball League, sees the team as an important addition to the community league, which he said represents all ethnicities and “never has any racial stuff” or antisemitism on the field — a statement confirmed by members of the Stormers.

McCarren Park is a major center of activity on the border of Brooklyn’s diverse Williamsburg and Greenpoint neighborhoods, giving the local softball league an unusually large audience. While many visit the park to socialize and people-watch, the young Hasidim chose this site because it lies outside the boundaries of their religious enclave. The Stormers say that negative attitudes toward sports, widely held in their part of Williamsburg, make parks on their home turf undesirable spots to play softball.

It is not just parents in Hasidic Williamsburg who look down on public athletic competition. Several players agreed that Joel Teitelbaum, who is the revered, late grand rebbe of the Satmar Hasidim and led many of his followers to settle in Brooklyn after World War II, was known to be against playing sports.

“Rabbis don’t like it, but they got a job to do,” said one player, who wished not to be named in print. He added that his parents know about his unorthodox hobby, but find it “better than doing other bad things.”

A player named Vider, 19, explained: “I like to play, because it’s like hypnosis. I can forget about the world.” He mentioned that his family is especially strict. If his father were to find out he plays softball? “I would be geshlugn” (Yiddish for “beaten”).

It is common for Hasidic children to play sports at summer camps in the Catskills, or throw a ball around at recess during a school day at yeshiva. But when boys become men, the games are expected to stop, particularly if they occur outside the Jewish context.

Avraham, a 23-year-old melamed at an area yeshiva that serves the Vizhnitz Hasidic community, elaborated that after a bar mitzvah, when a boy dons the dark-colored garments of a Hasidic adult, he is discouraged from playing ball in the streets. “We dress for the public,” he said matter-of-factly.

An administrator from the Pupa yeshiva, standing in front of the talmudic academy’s offices on Bedford Avenue in Williamsburg, emphasized recently that the Stormers are an extreme minority. “How many of them are there, 12? What does it matter?” he said.

On a recent Sunday morning, 15 minutes after a game’s scheduled start time, only a handful of lightly bearded Hasidim warmed up at McCarren Park. Members of the contending team, No Control, began to wonder aloud if a game would really happen.

“Don’t worry,” said a spectator who identified himself as “Weebles,” age 41, of Queens. “More will be coming. Soon there will be 30 of them.”

Sure enough, a van-load of yeshiva bokhers arrived just in time to save the Stormers from a forfeit. Though their line-up included three young Dominicans and an African American, all of whom work with one of the Hasidic players, it lacked the five key team members who make up the Stormers’ competitive core. (No Hasidim play on any other league team.) The Stormers lost both rounds of the day’s double-header, scoring only one run in the process.

After the upsets, Sherman, who umpired the games himself, noted the absence of the Stormers’ old guard, including a left fielder who runs “like a gazelle.” They improve every year, he said proudly, and tend to work harder than most teams. “When the day is over, and everyone’s gone home,” he said, “they’ll be the ones out here practicing.”

Michael Casper is working on a study of the effects of gentrification in Williamsburg on the neighborhood’s Hasidic community.