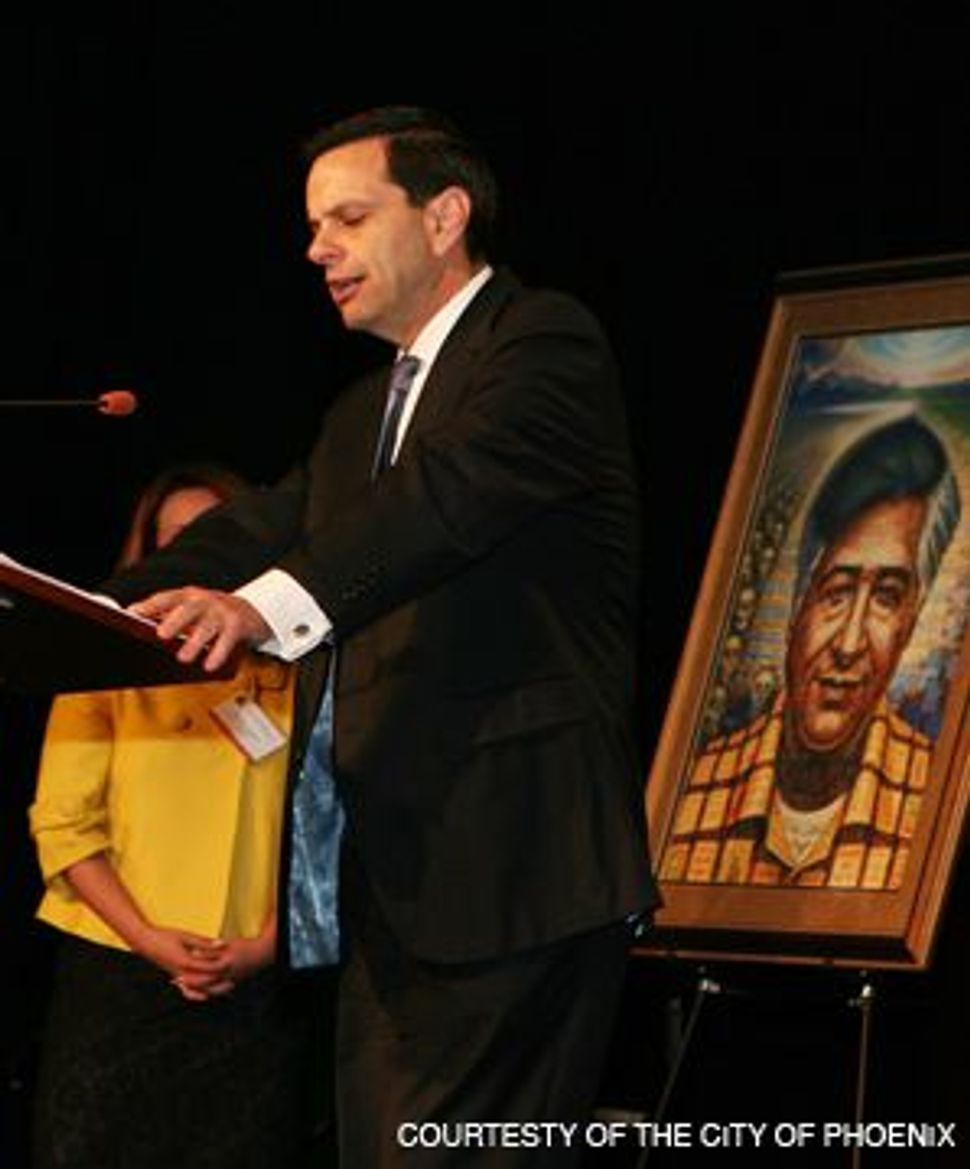 PHIL GORDON: ?This country was built on immigration.?

Phoenix — At first glance, Mayor Phil Gordon’s office in downtown Phoenix looks like that of any other mayor, replete with photos of his kids and a sweeping view of the city. In the case of Arizona’s capital, that means rolling desert hills. But in an otherwise sparsely decorated workspace, one detail stands out: a silver tray of Israeli shekels atop the coffee table. 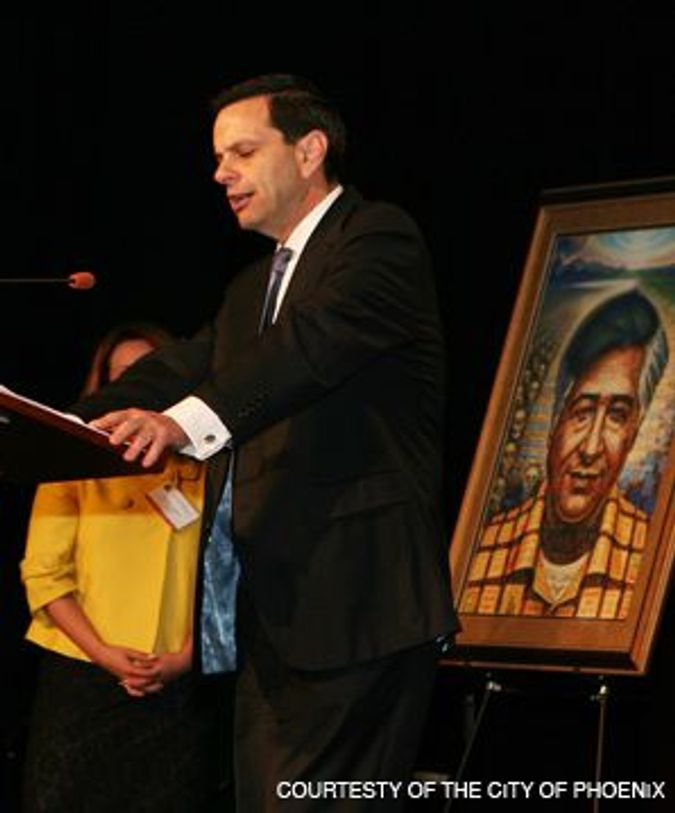 PHIL GORDON: ?This country was built on immigration.?

Gordon is the first Jewish mayor of Phoenix, one of America’s fastest-growing cities. A popular leader serving his second term, Gordon has spoken out on behalf of Israel more than most local elected officials. He even penned an opinion article on the threat of Iran, in which he urged other local politicians to take a stand. But he also has taken a vocal position on an issue that is less of his choosing and more a product of his city’s circumstance: how to handle illegal immigration.

That led Gordon to travel last year to Washington to lobby for comprehensive immigration reform after an immigration reform bill co-authored by Arizona senator and presumptive Republican presidential nominee John McCain failed to pass. Gordon, a Democrat, endorsed McCain in the presidential primary, though he now says that in the general election he is remaining neutral.

Gordon’s endorsement of the senator had, by all appearances, less to do with policy than with friendship and loyalty — traits Gordon said he learned from his Jewish grandfather, a Lithuanian immigrant.

Gordon, 57, leads a city increasingly at the nexus of the debate over how to handle undocumented workers who pour across the border with Mexico. In recent months, that debate has intensified in Phoenix, as the Maricopa County sheriff, Joe Arpaio, has taken extreme measures to round up and deport illegal immigrants. Gordon, along with local Jewish groups, has made decrying the sheriff’s strong-armed tactics — which, according to news reports, have included forcing arrested illegal immigrants to wear pink underwear and eat rotten green bologna sandwiches — a top priority.

“The mayor is the only high-level politician in Arizona who stood up against the sheriff,” said Rabbi Maynard Bell, executive director of the Arizona chapter of the American Jewish Committee. “Suddenly the sheriff is no longer a sacred cow anymore, and I think it took the mayor’s courage to do that.”

Since last January, the sheriff has been conducting what he calls “crime suppression sweeps,” in which he and a posse of volunteer deputies show up in predominantly Hispanic neighborhoods, stop residents for minor traffic violations and then question them about their immigration status. A recent “sweep” here rounded up 27 Hispanics who the sheriff believes may be in the country illegally. The “sweeps” are often accompanied by rowdy anti-immigrant rallies, as well as counter-protests.

In an interview at his City Hall office, Gordon pointed to a sign that had been held at one of the rallies accompanying an Arpaio “sweep.” The sign, rendered in scrawled handwriting, read “Hooray for slaughtering of illegals, Boo to the beaners!,” with a swastika drawn at the bottom.

The mayor, a former lawyer, holds that the sheriff’s actions are tantamount to racial profiling and represent a violation of civil rights. He first spoke out against the sheriff’s tactics in late March, at the seventh annual Cesar Chavez Day luncheon here. That same week, he sent a letter to U.S. Attorney General Michael Mukasey asking for a federal investigation into Arpaio’s tactics. (As of yet, there has been no word on the status of that request.)

A spokesman for Arpaio did not return a call seeking comment.

Gordon’s criticism of the sheriff has not been welcome in all corners of the Phoenix Jewish community. Amy Laff, founding chairwoman of the Arizona chapter of the Republican Jewish Coalition, said in an e-mail that “the mayor should not engage in undermining legitimate enforcement efforts by the County Sheriff by, for example, requesting an FBI investigation into the Sheriff’s Department immigration enforcement activities.”

And Arpaio is a highly popular figure among the Arizona electorate. An Arizona State University poll conducted in late April showed a 59% approval rating for the Maricopa County sheriff. Gordon, on the other hand, had only a 42% approval rating.

But Gordon, who first took office in 2004 and was re-elected last September with nearly 80% of the vote, said that he spoke against Arpaio because it was the right thing to do.

“Certainly standing up to the sheriff isn’t the wisest thing to do politically, but it was the right thing to do ethically and morally,” Gordon said. “I personally regret that I didn’t do it earlier.”