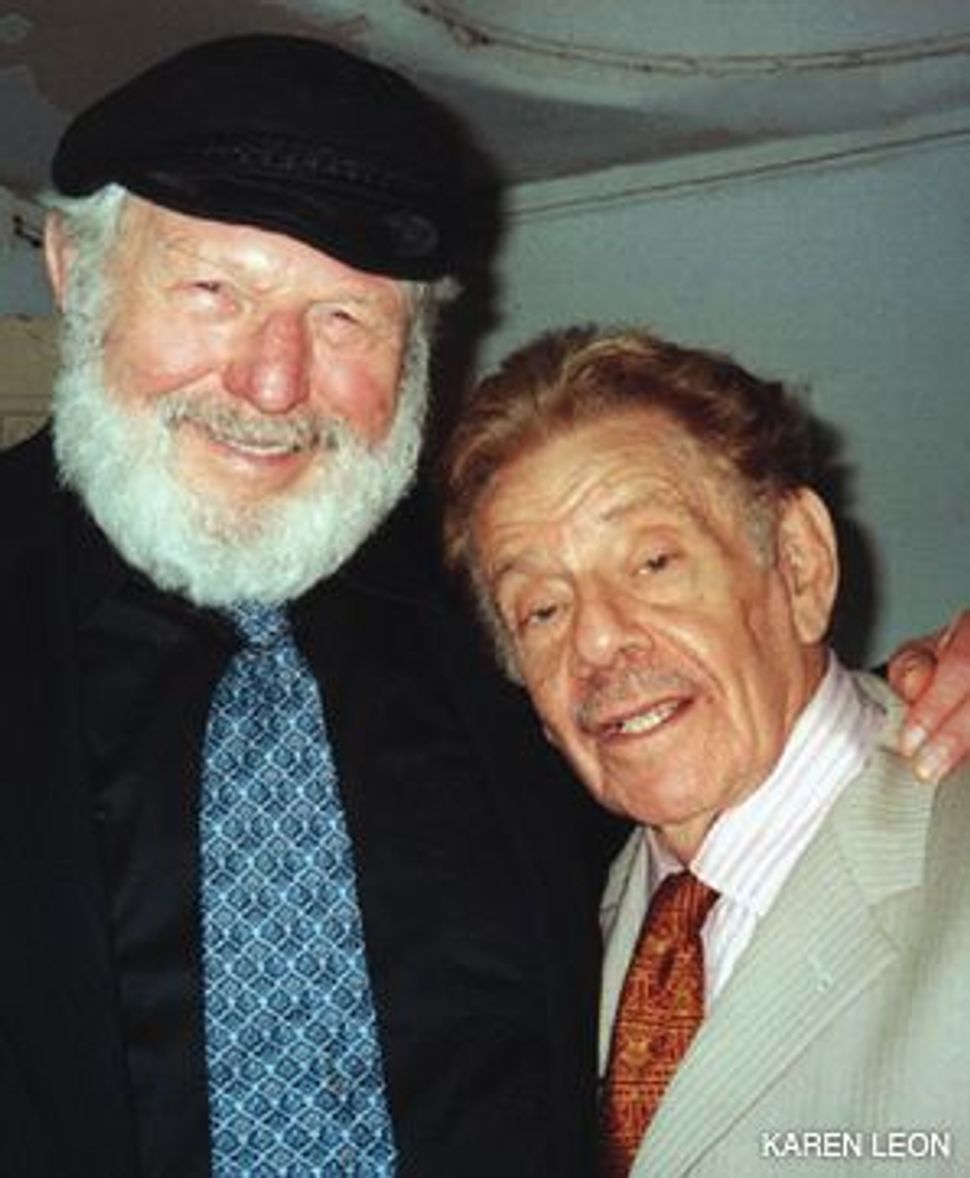 LAUGHTER IN THE AISLES AT TOWN HALL’S FOLKSBIENE GALA 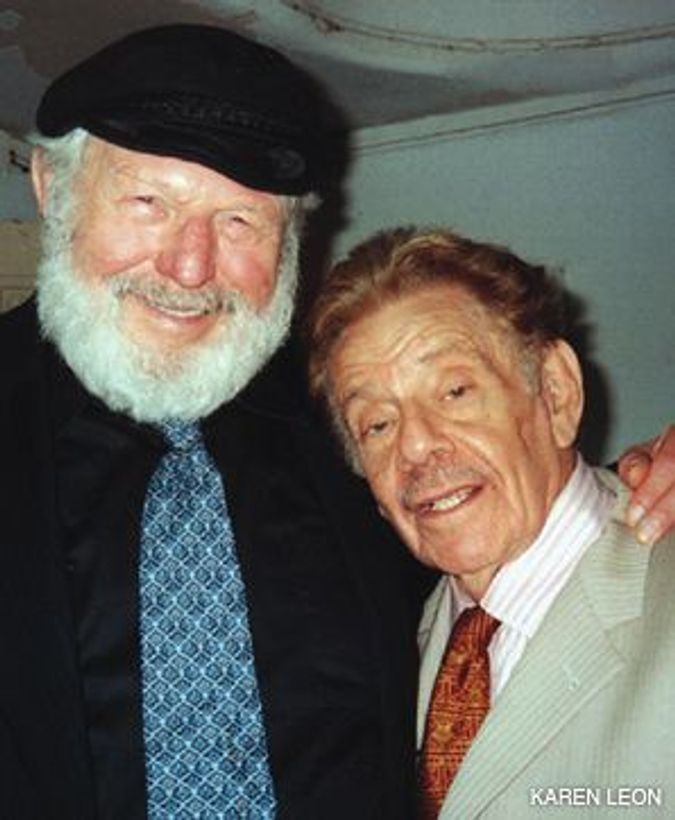 With its curtain-raising musical opener, “Tzadiks and Nudniks, Shlemiels No Goodniks” — a takeoff on Stephen Sondheim’s “A Funny Thing Happened on the Way to the Forum” — the June 17 National Yiddish Theatre-Folksbiene benefit at Town Hall was off and running. In keeping with the caution “Mensch trakht un got lakht” (“Man plans, God laughs”), **Theodore Bikel elegantly explained that he was standing in for host Brian Williams because “Brian is in Washington at a memorial for Tim Russert.” The expected star, Carl Reiner, was a no-show because, Bikel said, “His wife, Estelle, is very ill, and he could not leave her bedside.” And, in a spin on the actors’ “Break a leg” good-luck mantra, TV star Mary Tyler Moore could not come, “because she broke a kneecap.” Folksbiene board chairman Jeffrey Wiesenfeld was beside himself. But he needn’t have worried. How else, if not by miracles, did America’s only Yiddish theatre survive 93 years?

So on opening night, the cavalry, led by Fyvush Finkel and Mandy Patinkin, charged to the rescue. Joan Rivers pitched in via videotape, and sexpert Ruth Westheimer’s commentary included a reference to erectile dysfunction, which had Jerry Stiller admitting that “it brought tears to my eyes.”

David Price, a reporter on CBS TV’s “The Early Show,” served as master of ceremonies for the benefit, which honored philanthropist Irwin Hochberg. The All Star Band, under the baton of Folksbiene artistic director Zalmen Mlotek, provided the music for an evening that melded skits and shtick old and new, funny and poignant — music that for generations have kept Jewish audiences coming back for more.

Though his credits run to two pages in the program journal, Bronx-born Reiner is best known for his appearances in the TV revue series “The Show of Shows.” In the midst of his rambling videotaped reminiscences — which included a reference to WEVD’s classic signature commercial for the clothing store Joe and Paul, which “would supply your son with a bar mitzvah suit” — Reiner had the audience in “stitches” with the following joke: “Two egg-laying chickens compare notes on how well they are being paid. One says, ‘I get 22 cents a dozen.’ The other boasts, ‘I get 24 centers a dozen. Mine are extra large.’ Somewhat miffed, the first hen declares, ‘For two cents more I’m not going to tear my rectum.’”

Renée Taylor (aka Sylvia Fine, mother of nanny Fran Fine on the TV show “The Nanny”) was a hoot in the sidesplitting skit “A Visit to the Hospital,” in which, she pays a visit to wheelchair-trapped cantor Robert Abelson and during that visit ends up eating the entire box of chocolates she had brought him. In his own right, Abelson’s extraordinary performance in Yiddish of “Ol’ Man River” was worthy of a Paul Robeson award (were there such a prize). Joanne Borts, Lisa Fishman and Lisa Rubin were delightful in their rendition of the edgy song “Jekele Shik mir a Chekele[!]” (“Send the money, Jack!”). The cast of “Kids and Yiddish” had parents and grandparents in the audience shepping nakhas and reaching for a Kleenex when they concluded their gig with “Mayn Yiddishe Mame.” The applause meter went off scale when Bikel and Finkel re-created — in Yiddish — the scene from Joseph Stein, Jerry Bock and Sheldon Harnick’s “Fiddler on the Roof” in which Tevye (Bikel) is unaware that butcher Lazar Wolf (Finkel) wants to marry his daughter, and assumes instead that the butcher wants to buy his cow. Stir in Mickey Katz’s parody of the song “Sixteen Tons” — “You load sixteen tons of hard salami; corned beef… un hot pastrami… I owe my neshome (soul) to the delicatessen” — and finish up the remarkable evening with a finale set to Irving Berlin’s “There’s No Business Like Show Business” (Yiddish lyrics by Miriam Kressyn and Seymour Rexite), and, as they say in Yiddish. “S’iz gegangen a roykh”— “It was hot! Hot! Hot!”

Another mazel tov to the Folksbiene! The theater has left its Workmen’s Circle/Arbeter Ring, where it had resided since its founding in 1915, and now it will begin a new chapter in its own office a few blocks away — 1,700 square feet of administrative and rehearsal space at 135 West 29th Street.

In his keynote address at the June 18 Simon Wiesenthal Center tribute dinner held at the Plaza Hotel, the center’s founder and dean, Rabbi Marvin Hier, cited Simon Wiesenthal’s estimate that “were it not for… the pogroms, the inquisitions and the Holocaust, the world Jewish population would now number over 100 million.”

Honoree Whoopi Goldberg, who was born Caryn Elaine Johnson, explained the provenance of her name. She had chosen “Whoopi” as her stage name, in honor of the whoopee cushion. But her mother told her, “You won’t be taken seriously if you are called [a] whoopee cushion.” So, the actress chose the name “Goldberg’ after “an ancestor.” She said she would be traveling by bus to Las Vegas for a taping of ABC’s “The View,” on which Goldberg is one of the hosts. “I would like to visit Israel again,” said Goldberg, a goodwill ambassador to the United Nations, “but I don’t fly anymore.” Rhonda Barad, the center’s Eastern director, proudly noted, “This dinner represents a third generation surge.” Charles Gibson, anchor of ABC TV’S “World News Tonight,” served as the dinner’s master of ceremonies. The 400 guests raised $1.1 million.

Hier’s extensive speech opened with his trip to Sderot, “a city under daily Qassam rocket attacks from Hamas terrorists.” On to Tel Aviv, where he heard Shai Agassi, the 37-year-old American whose electric car has a good chance of making Israel energy independent. He transitioned to Samuel Kassow’s extraordinary book, “Who Will Write Our History?” in which Kassow details how historian Emanuel Ringelblum organized 60 members of what became the oyneg Shabes archive of the Warsaw Ghetto to collect and record for posterity the day-by-day destruction of Poland’s Jewry. Thousands of documents were buried in dozens of milk cans in Warsaw — one of the cans was buried under 34 Swieto-Jierska — in the apartment house where I had lived until the German occupation.

Though the Simon Wiesenthal Center is most closely associated with preserving the memory of the Holocaust by fostering tolerance and understanding through community involvement, educational outreach and social action, it has expanded its arena to include such contemporary issues as racism, antisemitism, terrorism and genocide. Headquartered in Los Angeles, it maintains offices in New York, Toronto, Miami, Jerusalem, Paris and Buenos Aires.

Park East Synagogue’s June 5 dinner dance at The Pierre celebrated the synagogue’s 118th anniversary; toasted Israel’s 60th birthday; highlighted the recent historic meeting at the synagogue of Pope Benedict XVI with its rabbi, Arthur Schneier, and unmasked Israel’s outgoing ambassador to the United Nations, Dan Gillerman — the evening’s guest of honor — as a bona fide comedian. Gillerman, who was introduced as “a man who needs no introduction,” cited Henry Kissinger, who would bristle at such a preface and was heard to mumble, “I still would like an introduction.” Gillerman said, “The five and a half years [my wife] Janice and I have spent in New York have made me closer to Judaism than the 40 years I have spent in Israel.… Were all rabbis like [Schneier], more people would be devoted to Judaism.”

He thanked the diplomats in the room, including those from Oman, Argentina, Austria, Italy and Russia, for “choosing to be here as an indication of their commitment to Israel.” Gillerman is due to leave New York at the end of July. In a question-and-answer interview in the July 20 New York Times Magazine, he lauded successor Gabriela Shalev, a law professor. “Diplomacy is not something you can learn at school or in the Foreign Service,” Gillerman said. “A diplomat is a person who can tell you to go to hell and actually make you look forward to the journey.”

The evening included a series of awards presented to students of Rabbi Arthur Schneier Park East Day School, including David Benhuri, an eighth grader and class valedictorian who vowed to continue his Jewish education at the Heschel High School, and whose school and extracurricular activities appear to be off the academic Richter scale. Following welcome remarks by synagogue president Herman Hochberg, there were awards presentations to Michael Scharf “for 25 years of leadership” and to Polly Etkind-Hochberg, president of the synagogue’s sisterhood.