Why We Need the Hora 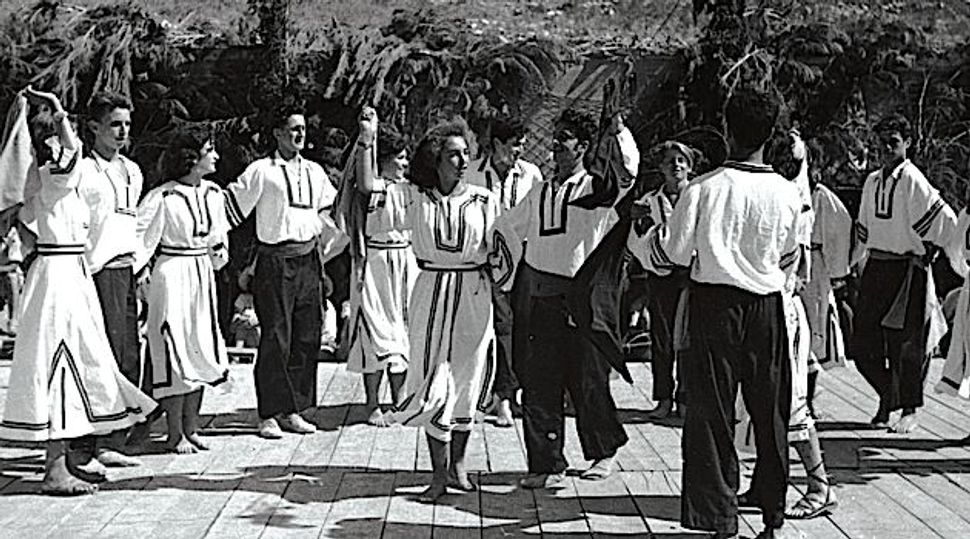 Tradition: The hora is performed by member of kibbutzim Ein Harod and Yagur in northern Israel during the early 1950s. Image by Forward Association

The hora is running on fumes. Go to any bar mitzvah or Jewish wedding, and sure, you’ll still find folks doing that primordial party dance. Some are kicking up a storm, faces glistening with glee (and sweat). But plenty more are simply squashed together, shuffling in the same general direction, feigning frolic. It feels less like a simcha and more like the subway. Something vital is missing — especially, it seems, among the bar mitzvah-aged kids — and I think I know what it is.

The tradition, that is, of learning Israeli dancing in Hebrew school, or at camp. And don’t start quibbling, “The hora is not an Israeli dance, it’s actually an older dance imported from Romania, etc., etc., etc.” I know that! (Or at least I just learned that, researching this story.) What I’m talking about is not one particular dance — it’s the idea of being steeped, from a young age, in certain songs and steps that pay dividends throughout a lifetime.

For a certain generation or two — let’s call it the young-to-old middle-aged — Jewish education and Israeli folk dancing went together like herring and onions. Play the opening strains of “Hee-nay-mah-tov,” and a whole swath of us are instantly whipped back to Hebrew school, or Jewish summer camp, and to the dance lessons we received there. But as dance class dies out, it may be taking our connection to Israel with it.

“Israeli dancing… was a deliberate way of building a connection for Zionist youth,” said Allen King of Berkeley, Calif., an Israeli dance teacher since 1970. (And, okay, my brother-in-law. But he really is an amazing teacher who can get a roomful of petulant seventh graders dancing and twirling and grinning when they fully intended to just stand there, looking cool.)

Before Israel was even a state, King explained, pioneers were arriving from all over the globe, and they had to create a culture pretty much from scratch. Other countries had folk dances that evolved over hundreds of years. Israel had missed a 2,000-year chunk of that process. So the newcomers took bits of dances from here, snatches of music from there, and created dances as collective as their kibbutzim. Men and women were equal on the farms and equal on the dance floor. The circle meant strength — real and metaphoric. “You were all supporting each other,” King said. “And even if you didn’t know what you were doing, you could relax… because the people on your left and right were helping you.” It was socialism set to music.

Dance was so important to the fledgling state that there was even a government ministry of it. And from the Holy Land, government-certified dance teachers went forth to spread the steps to the Diaspora, so we, too, could feel what it was like to be Israeli.

“Mayim” — the Hebrew word for “water” — “is the one dance that stands out in my mind,” recalled Shana Aborn, a 40-something Web editor from Queens. “I think we performed it for our eighth-grade graduation ceremony. We were told that, well, when you live in the desert, water is what you get excited about.”

“Mayim” is the dance that I remember best, too. And the odd times when I hear that song, in my mind I go right back to Sunday school, and to a certain excitement about Israel. Nothing else makes the direct trip for me, because nothing else from that part of my education combined so many motions and emotions.

“It’s a physical way of being connected,” King explained. “You don’t get that same feeling when you’re sitting and studying the story of Moses or Abraham in class. …I see it all the time. I put the song on, and I see the smiles on people’s faces.”

On aging people’s faces, for the most part. Today, says Ruth Goodman, director of the Israeli Dance Institute of the 92nd Street Y’s Israeli Dance Division, the commitment to teaching dance at Jewish schools and camps is “sketchy.” In general, she said, “those who are responsible for the Jewish curriculum haven’t mandated it.”

Tell King about it! “I got fired from the place where I was teaching dancing for 12 years,” he said. “The new educator didn’t call me all summer, so I called and asked, ‘What’s going on?’ He said: ‘We’re not having dance in the fall.’ I said, ‘I’ve been giving up my Sunday mornings for 12 years teaching dancing to your kids, and I know what they got out of it.’ He said, ‘We just don’t need it.’”

No, I guess kids in Hebrew school need more time at their desks, more time holding a pen, less time holding the hand of the cute boy or girl next to them.

We can make Israel a far-off place, and we can make Judaism a lot of rote learning and we can make the day drag on for our kids in Hebrew school. (I should know — one of my sons tried three!) But this just means that when today’s bar mitzvah kids hear the hora in 20 years, it’ll stir them about as much as the hokeypokey.

Then they’ll all get excited when someone turns on Lady Gaga. And we’ll wonder why our kids don’t care about Israel.

Why We Need the Hora